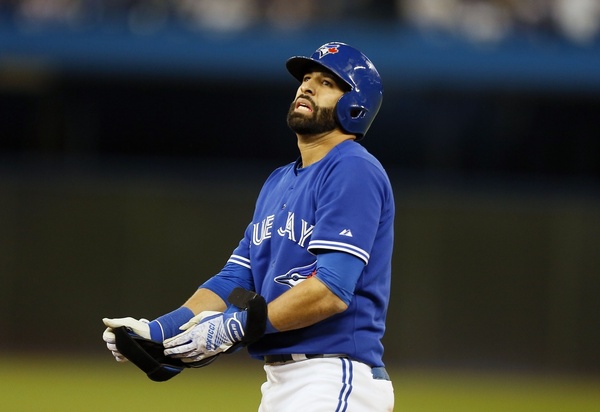 When Jose Bautista talks about the surplus value he’s brought to the Blue Jays over the life of his contract, he is unequivocally, 100% bang on. A recent piece at FanGraphs pegged him as having been worth nearly $100-million beyond the $70-million they’ll end up paying him over the life of his current contract.

Part of me can’t fault Bautista for wanting to get paid after so many years playing below market value. Most of me, however, wants to remind Jose that a “hometown discount” has nothing to do with the mutually-risky deal he signed following his breakout 2010 season. Yes, it has turned out to be a huge bargain for the Jays, but it’s not like he was doing them any favours when he put pen to paper.

More important than all that, all of me wants to go make some popcorn, then settle in and enjoy how the fan base is going to react to his statement above, which comes as we’re also learning all this:

Two weeks ago Jose Bautista told the Blue Jays front office the dollar amount and term is would take to re-sign him. Hasn’t heard back since

Bautista: “I’m not willing to negotiate. I don’t think there should be any negotiation. I think I’ve proven myself.” #BlueJays

This stuff should come as a surprise to no one… except anyone who thought Jose might be savvy enough to not completely torch as much goodwill among fans as humanly possible.

Which isn’t to say that he’s wrong about having proven himself and having played for a discount for a long time, it’s just… he’s got some awfully funny ideas about how negotiations and the marketplace work.

Or maybe he doesn’t! He’s not an Edwin Encarnacion, whose market is severely limited by the fact that he’s a full-time DH. Jose can play for any team, and he’ll be the top free agent hitter next winter. Suggesting that there’s a price he expects to get and that it’s a waste of time to try to negotiate him down because surely someone will pay it is maybe not particularly endearing, but it’s probably not wrong either.

So… how about that for a start to spring training, eh?

The thing is, he can say whatever the hell he wants. Whether he returns to the Blue Jays always has been a matter of money, no matter how anybody postures, and maybe it’s cooler than a whole lot of people are probably going to think that he’s just being honest about it. I mean, he knows what the parent company is worth just as well as we all do, and in a warped way this is like him demanding that they do right by the Blue Jays by doing right by him.

Or, at least, that’s how he should spin it. Not that I think it will work either way! In which case, why set yourself up publicly to be castigated — however inaccurately — as the typical greedy athlete? Just to tell the world you know what you’re worth and remind them that you’ve been hard done by with your mere $14-million per season these last few years? Sure, players deserve every penny they can wring out of the billionaires and giant corporations that make so much money off their backs, but I don’t know how digging in so publicly helps anything.

Kinda fun to watch, though! And speaking of…

Oh, this totally won’t get old over the next eight months!