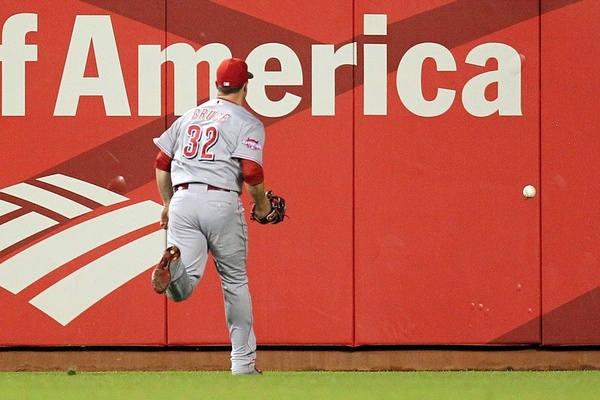 Cincinnati Reds outfielder Jay Bruce is more durable than Michael Saunders. I’ll give him that. But unless you’ve got a time machine, that’s about all I’ll give him without being really, really hopeful, given his being hot garbage over the last two years. Especially if you’re asking me to factor in his salary ($12.5-million for this year, plus a $1-million buyout on a $13-million option for next season) when comparing him to the Jays’ current in-house options for left field.

And why would you be asking me to do that? Because on Monday night trade heavies Jon Heyman and Ken Rosenthal started tweeting about the Jays making attempts to acquire Bruce in exchange for Michael Saunders — something I heard from a random emailer two weeks ago (he later told me the particular deal at the time fell apart, but that they were still trying), and discussed at the time on Birds All Day.

We dumped on the idea then, because Bruce is bad. And yet here we are. Or, rather here we are:

Jay Bruce is coming up in trade talks still. Blue Jays could be a possibility.

Source: Bruce deal, if it happens, could involve 3rd team, and that team could get Saunders from #BlueJays. Saunders earning $2.9M in 2016.

Hey, and lucky us!

Source: #BlueJays are NOT on Bruce’s most recent no-trade list. Can be sent to TOR without his approval.

Oh, and here’s something!

In 2013, Jay Bruce’s last good season, Brook Jacoby was his hitting coach. So this will all end well.

So… they think they can fix him, maybe?

To be fair, though, he’s got power, which is hard to come by. Plus he improved his strikeout rate to something resembling almost league average in 2015 (22.3%), and his walk rate generally a little bit above average. In fact, the small bio on his FanGraphs player page suggests that “combining career best contact skills with his ever present power should have yielded better results. Perhaps those will come in 2016.”

The thing is, to get excited by that you need to overlook the dumpster fires that have been his last two seasons. Even with the platoon advantage he’s been bad, posting a 97 wRC+ against right-handers last year (which is at least OK, I guess), and an 87 the year before that. Hey, and also the defensive metrics don’t like him (mostly), as he sports a negative URZ in three of the last four seasons, including the last two. (DRS actually liked him last year, at least.)

Yep, it’s Bautista in the field and Smoak at the plate. Plan the goddamned parade, eh?

Of course, that’s what he’s been, and only over the last two seasons. He’s certainly been better than that in his career, he’s still only just 28 until April, and he’s only costing the club an unreliable asset who isn’t under team control for 2017 (Bruce is, albeit for $13-million, if the Jays pick up his option — if they even actually pull this trade off!), so it’s not exactly all doom and gloom. Surely whoever is calling the shots thinks this is a distressed asset ready to shine again and make them look like geniuses, which… maybe???

In a fascinating/terrifying FanGraphs piece from November by Eno Sarris we learn that Bruce himself would tell you that it’s a knee injury that’s derailed his career so badly — he had surgery that kept him out of action for just over two weeks in 2014. That’s hard to take seriously, though, given that he said he was healthy at the start of last season, and got so much worse as the year wore on. But… maybe?

And maybe we’ll see more reason to like it once we know what else — if anything — is going the other way.

If it’s just Saunders, and if it’s somehow cash neutral, I can buy believing in Bruce’s ceiling over Saunders’ (despite Saunders’ 3 WAR advantage in 2014, his last healthy-ish season), given the big uptick in durability and his (theoretical) potential as a 2017 asset. I could even buy paying a premium to make that switch, I suppose. But not a big one. And certainly not one where the club ends up committing dollars that could have gone to literally anything else that could have helped this club out.

Not knowing the details — not knowing if it’s even going to happen — makes all that hard to say. What we can say, though, is that Jay Bruce is bad. Or that he was bad in 2014 and 2015, and I’m not sure why anyone would pay more than practically nothing to see if anything is going to change going forward. It’s not like it couldn’t — it’s not like his power couldn’t be an asset at the Rogers Centre or that his possibly improved approach might not pay dividends. Maybe Michael Saunders and a little bit more salary on the books counts as “practically nothing” to the Jays. It’s not! But I guess it’s close enough to not be too distraught over the possibility of this move. But I think it’s worth being just a little bit.

Just when I was getting to like defending Shapiro and Atkins, too!

It’s happening again. After a long period of silence, which had me hopeful this might be falling apart, the rumblings have started again:

Now hearing that this Angels-Blue Jays-Reds trade is close to being finished.

|Hey, so maybe this is still going to fall apart after all. Can’t imagine a trade involving Michael Saunders having some kind of hiccup at the “teams reviewing medicals” stage, but here we here:

Sources: There is doubt among those involved in the Jay Bruce talks that the deal will be completed.

Jeff Passan tweets that it was a player other than Jay Bruce whose medicals have caused the hold up. Jerry Crasnick adds that a source believe that it, specifically, is Saunders’ knee that’s the issue. Because… of course it is.

But here’s the thing: while I didn’t agree, I had a lengthy Twitter back-and-forth earlier with someone who would spin Bruce’s disastrous last two seasons thusly: in 2014 he was so hampered by his knee injury and his swing was so messed up that you can basically just write it off; then in 2015 he was derailed by catastrophically bad luck — as evidenced by the fact that he posted just a .251 BABIP, but still produced one of the better rates of hard contact in the league (35.4%, which placed him 30th among 141 qualified hitters).

It’s… not implausible .But it sure is just about the most favourable argument for Bruce that I can imagine. Which doesn’t mean that it’s wrong, it just really explains away a couple of pretty awful seasons from what has never been a high BABIP sort of guy, who is showing signs of decline in other ways too, such as in the field and on the base paths. If they do end up doing the deal, maybe it’s something we can desperately cling to. But… um… I like this Buster thing where it’s not going to happen a whole lot better!

Aaaaand I may get my wish, because Buster followed up the tweet above with one even more emphatic:

Another source: The proposed Reds/TOR/LAA deal had traction, but hit a snag during the medical review portion of the talks. For now: Dead.

Hoookay then! It sure has been a fun ride here tonight, though, hasn’t it?

Stay tuned for more updates (though… probably not until morning at this point, right?)