Home > 2016 > 02/29 > Mark Shapiro Is His Clearest Yet On Bautista And Encarnacion Extensions, Alex’s Departure, And More 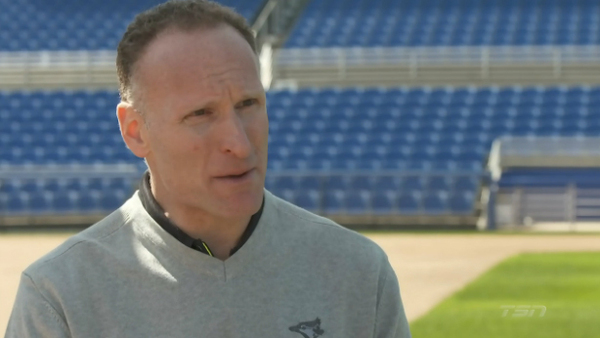 In a terrific and wide-ranging 19 minute interview (which for some reason isn’t embeddable), Blue Jays president Mark Shapiro spoke with TSN’s Steve Phillips in a piece aired over the weekend, making perhaps his clearest remarks yet on the departure of Alex Anthopoulos, the realities of the Jose Bautista and Edwin Encarnacion contract situations, his position on using analyitcs data to guide decisions, and more.

Of particular significance are his remarks on the status of his free-agent-to-be sluggers, and the clear implication that fans shouldn’t expect a resolution any time soon (despite the fact that near the end of the chat he wouldn’t rule out something changing from where it stands now, and a deal getting done with Encarnacion prior to his Opening Day deadline).

Bluntly asked if the club could afford to keep both sluggers, Shapiro demurred.

I think it’s an easier question to answer at the end of the season, right? If we have another season like last year where we are a contending ballclub — but we do it this year from day one to the end — the answer probably is yes. You know that revenues are going to rise to the point where you can afford two guys like that. To be certain of that right now is pretty difficult. The answer is always yes, but the answer is, “What other decisions is that going to force you to make?”

This is hardly an unexpected or surprising answer, of course, and granted he’s only speaking here about the possibility of re-signing both, but it doesn’t exactly make you feel like an extension for either is imminent, does it?

Thing is, they’ve sold a lot of tickets already for this season, so it’s not exactly like they have no idea about where revenues are expected to go over the coming year. On the other hand, if the team doesn’t perform well on the field, their 2017 revenues would certainly experience a hit. So I think it’s fair of him to say that — and smart to get us thinking about this staying unresolved until next fall, because… let’s be honest, it probably will.

That’s especially the case of Jose Bautista, who made waves this week with a reportedly astronomical ask for a player of his age. Shapiro concedes that it might not make sense to apply the aging curve to Jose the same way as normal, though.

Jose and I have had this conversation, that he does not — that there is no comparison for him as you’re starting to frame what it may look like in a decline for him, because there’s almost no comparison for what he’s doing at the age he’s at right now, especially post PED-era.

So that’s good! The club won’t necessarily view Bautista as someone who will age from here like a typical 35-year-old, which you’d think would make them more inclined to at least be serious about approaching the kind of dollar figure he’s hoping for.

On the other hand:

When it comes to age, what scares me about our team is not any one individual guy, it’s having a mass of guys that are that age.

A mass of guys that age is exactly what a Bautista-Edwin-Tulo-Martin-Donaldson Blue Jays core would look like going forward, if both players are signed. And at $20-million or more each, you understand why Shapiro would be scared. Unfortunately for those who would prefer to face that reality than lose their favourite club icons, he’s also quite clear about how he differs from fans when it comes to sentimentality:

It’s always about building a team. It’s never about one player. People want more than anything to win. People may feel in an emotional moment that they want a player more than anything else, but people don’t come to see a great player on a losing team. They love the players that are on a winning team.

Those comments didn’t come in sequence in the interview, but put all three together and… hello, Mr. Thompson!

That doesn’t mean Shapiro isn’t also very clear that they’d like it to be able to happen or that he has anything but respect for the players. But even still, I think one can read a little bit of “don’t expect us to budge any time soon” between the lines.

In getting to know Jose — one of the more unique guys I’ve ever been around in the game. I don’t think I’ve ever seen a player in 25 years who is as focussed on maximizing his performance, and as careful and thoughtful about doing everything he can humanly do. A guy that’s universally respected, not just by this organization, by the city, and by the nation. And a guy that deserves that magnitude of respect. So it’s disappointing to me to see both the nature of the negotiation misrepresented, some of the content of the negotiation just being untruthful, and it’s not a good representation of who he is — his character or his talent. That being said, it’s precisely because of that respect that I’m not going to comment any further than that now or going forward about the negotiation. It’s just, this guy deserves to be revered and appreciated and that’s how I’m going to keep it.

He means he’s going to revere him all the way until the fall, I suspect — which, though I may be reading too much into all this, could also suggest that signing Edwin before Opening Day isn’t in the cards, given how it would make it all the more difficult to sign Jose.

Then again, Shapiro says, “My guess is if we signed Edwin, Jose would say, ‘We’ve got a better chance to win — I want to be there.’ “

Someone who didn’t want to be here (you see what I just did there?) was Alex Anthopoulos, and though the subject is a liiiiiiittle tired, Shapiro addressed the former GM’s departure here, too. He even said something kind of interesting about it, I think.

PHILLIPS: Where we stand on issues often times stems from where we sit, and you sat in a baseball office for a long time. Do you think that your different background coming in was part of what was uncomfortable or awkward for Alex for the long-term — just because it was going to be different. And different might not be bad if it were somewhere else, but different in the place where I’ve experienced it one way for a long period of time is a bit awkward.

SHAPIRO: Yeah… I don’t want to think too much about, or project my opinion of what Alex was thinking. In hindsight that’s a very logical conclusion to draw. I wasn’t getting that from him. Consistently our interactions were very positive. He definitely did express, like, “Hey, you know, you should have the person you want in here, and I’m just being forced on you, and that’s not fair to you or me.” But I was committed — and that’s the reality 90% of the time — I was committed to work with him. I wanted to learn from him, you know?

That’s definitely among the most Alex-like reasons for him to really have departed that I think we’ve heard. I’ve tried to be quick to tear down the sorts of myths that suggest there couldn’t have been a layer of self interest in Anthopoulos’s decision-making, but maybe that simple line above really does get to the heart of why he left.

True or not, you’d like to think they’d have figured out to frame it that way sooner, though. But that, according to Shapiro, isn’t what he’s about. He stresses that he believes in honest communication. When asked what he’d have done differently at the beginning of his relationship with the fans of Canada and the city of Toronto, he basically shrugged.

“I don’t know what I’d do differently. I was myself, and I am myself, and I’m never going to cater the way I communicate any differently,” he explained. I think really the first impression was due more to the circumstances of the situation I walked into, which I had no control over.”

It’s hard to know how much of that is bluster or not (he did, at one point, go way out of his way to fawn over Paul Beeston *COUGH*), but he’s at least honest about his club, admitting that the pitching does still keeps him up at night, and saying that, while the Jays clearly have a shot at the World Series, if they’re going to be successful “there will need to be a good story on that pitching staff” — beyond the blossoming of a Marcus Stroman, he says.

That’s not an unfair assessment. And that sort of pragmatic thinking seems perfectly natural from someone who so emphasizes that he’s not a one-size-fits-all guy whose organization can easily be labelled a “scouting” one or an “analytics” one.

Asked what kind of an organization he’d run, Shapiro responded:

If you don’t change, if you don’t adapt, if you don’t surround yourself with people who have the best — so, my answer is this: I want the best information. I want the best scouting information — that’s important — but I also want the best analytics, and the best objective analysis. I want the best medical information. I also want the best character, personality, and make-up information. And then there’s an art — and that’s the greatest thing about this game: it’s played by human beings. Not by robots, not by video game, it’s played by human beings. So how you weight those different variables — it’s always going to be an art. And I think there’s no computer that’s ever going to spit out the answer on what player to go get — there’s still going to be some judgment involved. And you, having played, you know that to be out on this diamond — to know what that feels like, to be around a player, to think like a player — you’re not just inserting a widget, you’re inserting a human being. You’re building a team, and you want to build a team that defies the objective expectations.

That’s exactly the kind of think you want to hear from the person running your favourite team, I think. Whether it actually translates into a winning culture and organization remains to be seen, though. And there are obviously some rather big obstacles still ahead.

But Shapiro seemed comfortable here — comfortable, even, asserting, “I’m a baseball guy,” and downplaying his excitement about much of the business sphere he also leads — and that can’t not be a good thing.

It’s just… y’know… maybe don’t hold your breath for any Bautista or Encarnacion announcements just yet.