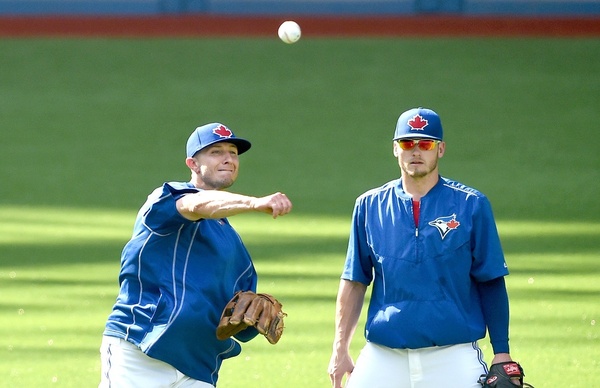 “This is the big-boy league! This isn’t facing the Phillies at Coors Field!”

Those words were awesomely, encouragingly yelled at Troy Tulowitzki last season by Josh Donaldson — an initiation into the world of the Blue Jays, which even still not yet through his first year, Donaldson was a hugely prominent part of, evidently — who seems like the key figure in helping his new, immensely talented teammate feel at home. Literally.

Competing (and somewhat conflicting) pieces on Tulo’s breakup with the Rockies and arrival in Toronto hit over weekend from national U.S. media guys. The “big-boy league” quote comes from Ken Rosenthal’s at Fox Sports, where the title says that Tulo says he’s done feeling bitter about his exit from Colorado — feelings Rosenthal says he wondered if Tulo would ever get over.

Part of the transition came with Donaldson’s help.

“We became close,” Tulo told Rosenthal. “We both love the game of baseball. We love competing. He does it almost better than anybody I’ve ever played with, to be honest. You want him on your team. He might be that guy on the other team that irks you. But you love taking the field with him. He gets the best out of me.”

The “literally” part comes from Bob Nightengale’s piece at USA Today — which suggests, particularly in the title, that Tulo is still seething about how things went down in Colorado — as he explains Tulo and Donaldson’s living arrangement:

Tulowitzki, who rented Tampa Bay Rays third baseman Evan Longoria home for spring training in Scottsdale, actually purchased a home on the water in nearby Palm Harbor for the Blue Jays’ spring training. Donaldson is living in his home so they can talk even more baseball away from the park. He figures he’s not going anywhere now, and has no intentions to ever leave, with five years and $98 million left on his contract.

That’s terrific, terrific news that should put to rest any lingering doubts Blue Jays fans may have had about the mindset of their star shortstop. Especially given that Nightengale’s piece shows much more than Rosenthal’s that Tulo hasn’t exactly yet quite embraced everything about the deal that brought him to the Blue Jays — and one wonders how different those feelings might have been if the move had been to New York or Boston, and not what’s still viewed (though after last season that must be changing) as something of an outpost.

Really, though, it’s the Rockies who bear the entirety of his ire. And, if one wanted to angle it that way (and I do!), perhaps Alex Anthopoulos in a way, too. AA’s insistence on total secrecy (which he thought was necessary to prevent the deal from being interfered with and falling apart), and his job convincing Rockies GM Jeff Bridich of its important, were what made the whole situation — not just the destination — a real gut-punch for the face of Colorado’s franchise.

“All I wanted was to be informed, and not be caught off-guard,’’ Tulowitzki said, “and I was caught off-guard. They always told me, “Hey, we’re going to inform you. You’re going to know exactly what’s going on. If anything were ever to get close, we’ll let you know.’

“All I wanted was them to be honest with me, and that didn’t happen, and that’s why I was so upset. I didn’t have anything against this place, I was just shocked.’’

Even better for Jays fans (if you believe it), Tulo lists off all kinds of reasons why he’s now thrilled to be here, from the legitimate World Series threat of a team he’s now joined, to the fact that he’s no longer the focal point — the lone teacher — in a clubhouse full of young players, to even the dilapidated spring training facilities. The Rockies’ site in Arizona felt like a country club, he says, while the lack of frills in Dunedin “reminds you of spring training, the way it’s supposed to be.”

Maybe don’t get too used to that, Troy. But… um… how do you not kind of love that about him?

And that new leg kick? Whoooo! Look out.