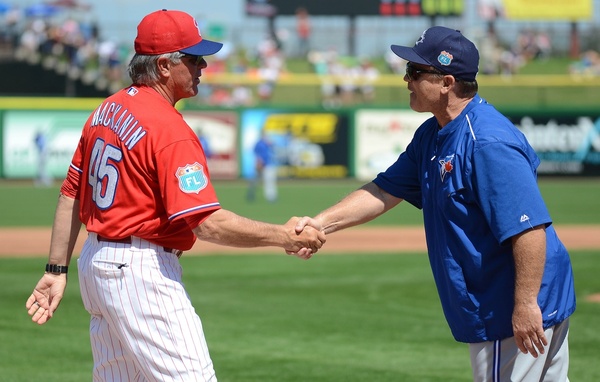 The Jays and the Phillies kicked off their Grapefruit League seasons here on Tuesday afternoon, and I guess I should write something about it, even though I haven’t exactly been paying rapt attention.

Frankly, I’ve been thinking about the best way to recap a game so it hits the key points without requiring too much effort on my part — which should be easy enough at this stage. So let’s see how this goes!

Marcus Stroman pitched pretty well today, particularly (read: only) in his 13 pitch first inning, even though he admitted to reporters later that he was working his delivery a bit. This is the time of year for such tinkering, which is why you never trust spring stats (especially early ones), but not everybody has quite the luxury to do so that Stroman does. The fate of Drew Hutchison’s career isn’t something that was ever going to be decided today, but I really did want to write nice things about him today (Hutch and Sanchez becoming reliable starters would be so key for the Blue Jays going forward, as it would keep them out of the free agent pool looking for guys to just soak up innings) and I can’t really do better than, “Meh, whatever, not a head-turner but it was fine, it’s March 1st, relax,” etc., etc.

True, he gave up the same number of runs as Stroman (or thereabouts — who was counting?), and one Twitter follower of mine suggested he had nice tilt on his breaking ball (sure, probably!), but a towering home run to JP Arencibia? Get it together, Hutch! Which is to say, less facetiously, “Who cares?” (Answer: Maybe Steve Delebar, who would do well to turn some heads early in what will be a fierce competition for low-leverage bullpen spots, and was only just fine enough today?)

In other news that totally doesn’t matter: Darwin Barney had a nice day at the plate. Really earning that big league contract — but will he dance and ham it up for the camera like his backup infield predecessor? That remains to be seen. We got to see Anthony Alford and Rowdy Tellez (who was eventually identified by the CSN Philly crew — which included Matt Stairs, who early in the game scoffed pretty hard at the notion of him going to the dinner when the Jays’ winter caravan passed through his home town of Fredericton, NB, this winter, which totally made me wonder what the rest of the story was) take at-bats in the same inning (to little success). The Philly Phanatic got some big airtime (important given that s/he is prooooobably the Phillies’ most important property for 2016 — other than prospect JP Crawford, who we also saw), as did Arencibia, who was interviewed mid-game about his big hits off Stroman and Hutchison. “I had a good first day in the big leagues,” Arencibia warned with a kind of self-awareness he had never exhibited here, “You set the bar too high sometimes.”

What’s also amazing (see what I just did there) and most amazing, however, is the hopelessly corny fact that the club got through Fake Game Number One without anybody getting hurt (well, Estrada’s back is barking, and Loup’s forearm is sore), and that those of use able to watch it live got to sit through a dogshit afternoon here in the frozen north-ish living vicariously through those soaking up the Florida sun — either today in Clearwater, or tomorrow, when the Jays and Phillies do it again in Dun… Edin?

How the hell do you pronounce that anyway, Matt? I don’t know, Chuck! Well I think if we spend several minutes of this broadcast on it we might just crack this nut!