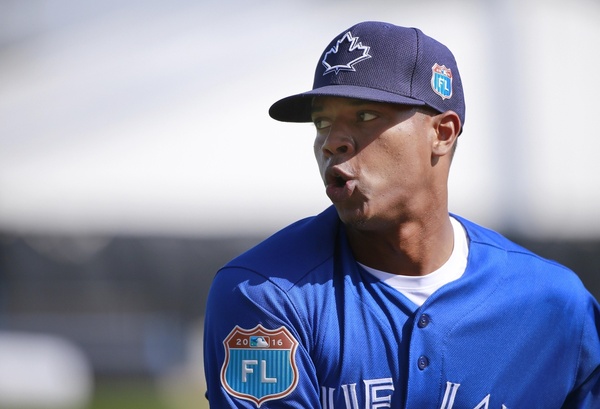 But whatever you want to call this first action of the Grapefruit League season, on this total garbage winter day here in Toronto, I call firing up the ol’ MLB.tv app and shaking off my rusty memory of which number corresponds to which position on the diamond (yes I have to do this every year) very, very welcome.

The Jays took BP in Dunedin, and have now made their way to Philadelphia’s Bright House Field, just a few minutes away in Clearwater, where Marcus Stroman (who’ll pitch what? an inning?) takes on… uh… some Phillies guy we’ve never heard of.

Oh, and what the hell, let’s do this one more time:

But @MLB, if you don’t run with this promo I just spent the last 3 minutes making, there’ll be hell to pay. pic.twitter.com/NTfmk9U3Qh

According to a Scott MacArthur tweet, in addition to Severino Gonzalez, the pitchers the Phillies will send out today are Hector Neris, Gregory Infante, Bobby LaFramboise (!!!), Edubray Ramos, Luis Garcia, Dalier Hinojosa, and David Hernandez. I don’t know either (except Infante, obvs).

MacArthur also tweets that R.A. Dickey will start tomorrow for the Jays in their Dunedin opener against the Phillies.

Oh, but lastly, be sure to like the great John Lott on Facebook — he’s got a new page up. You can like my stuff, too, while you’re at it!