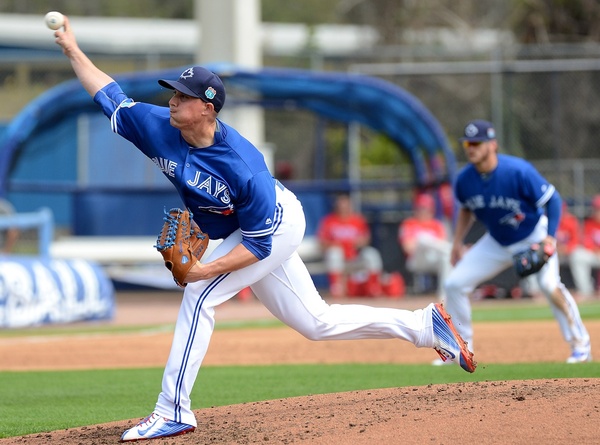 Look. Obviously at some point I’m going to write a recap of a Grapefruit League game and suggest that something significant actually happened. But a damn tie in the minor league-heavy second game of the spring? This is proooooobably not where that’s going to happen.

Patterns take a while to develop, especially when they’re only being built in fits and starts like this very slow beginning to the season — which is especially slow for the Blue Jays, who are deliberately easing players like Jose Bautista into the lineup.

And apparently it’s the club’s brand new high performance department leading the charge on that front.

Melissa Couto of the Canadian Press, via CBC.ca, spoke to John Gibbons about Bautista, who won’t play games in the first week of the spring, being eased in. “”Those guys have a lot of input, a lot of expertise. They’ve gotten together with him to put up a plan together,” Gibbons explained. “They have some good stuff, a lot of new science . . . pretty good ideas for conditioning, how the body recovers. Jose, it’s really perfect for him.”

Spring is unnecessarily long as it is, and having gone to the playoffs (!) last fall, the Jays played a longer season than many players were used to, so I’d say that all makes sense — as does making use of the resource that the club’s new front office has given them.

Perhaps that’s part of the reason why the Jays’ lineup was a little bereft of star power for a home opener — even one in Dunedin. Kevin Pillar, Josh Donaldson, and Russell Martin were the only players that would be guaranteed jobs in a fully healthy Jays lineup who suited up today (with Michael Saunders and Ryan Goins — who are close to that status — joining them as well).

Sure, I ranted about Pillar a little in the Game Threat, but so far in his young career he’s had a tendency to be awfully streaky, and even if he hadn’t, I’d no more say an 0-for-3 means he’s showed anything to suggest he’s not a lead-off guy than I would say that a great game meant that he had. Obviously. “Just one game” and all that.

It’s on the pitching side where you might tend to let your imagination run wild with possibilities so early in the pre-season, I think. But even so, we weren’t offered much today in that regard. Aaron Sanchez says he’s able to repeat his delivery better because he’s bigger and stronger now, and despite a home run he induced three ground balls and struck out three batters in his two innings of work, which is exactly what you want to see from him — especially with zero walks next to his name, too — and yet… Aaron Sanchez throws damn hard with sink. Most guys probably haven’t faced live pitching like that in… a while. Maybe not ever for some of the scrubs in the Phillies organization who were by then (presumably) in the game.

So… meh. It was baseball-ish. We got to spend a few hours listening to a game. Maybe David Aardsma didn’t do himself any favours, Dwight Smith Jr. had a shoulder pop out and back in when scoring the tying run in the bottom of the ninth (not that either of those things is in any way consequential to the Jays’ season), but otherwise? Was just cool to have it happening, mostly. Bring on the next one!