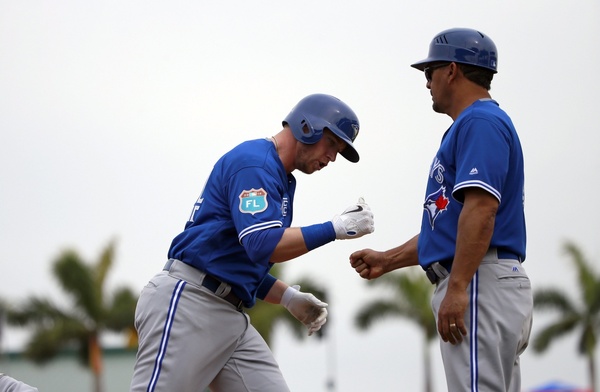 The Blue Jays won a game that was, at one point, a laugher, but that had turned tense by the end. Not that it matters.

As is usually going to be the case this early in camp, the most interesting things happening today took place off the field, rather than on it.

Gavin Floyd didn’t look great (because he was too amped up, he says), not that it matters. But he told reporters that his aim this spring is to pitch his way into the Jays’ rotation. Obviously that’s what any pitcher with a shred of a chance would say his aim is, but Floyd is on a big league contract, as is Jesse Chavez (who also aims to start), and as much as we’ve spent most of the time since they arrived here picturing them as long men well down the bullpen depth chart, I’m starting to wonder (with a little help) if we should be so sure — as I said in today’s Game Threat.

Could Aaron Sanchez end up in the Buffalo rotation alongside Drew Hutchison? At least to start the year? It’s not like they need him in the bullpen, as the fact that they’re willing to try him in the rotation attests. So unless he completely looks ready — and ready, in particular, to get out left-handed hitters, who hit him to the fugly tune of .279/.390/.488 last season — maybe now really is the time to give him a chance to get a nice run of starts in Buffalo, waiting in the wings to once again be a huge mid-season addition to this club, be it in relief or as a starter.

For his long term viability as a starter — something he’s invested in, given Marcus Stroman’s “we weren’t doing two-a-days for him to be a reliever” quote — it makes a whole lot of sense.

Then again, perhaps the bullpen isn’t quite as solid as all that. Or at least it might not be from the left side — not that Sanchez helps any of that — because Aaron Loup has been experiencing tightness in his forearm (never a good sign for a pitcher) here at the start of camp, and Ben Nicholson-Smith tweeted after the game that he threw today, but according to John Gibbons, “didn’t really feel good.” He’ll get tests to determine what happens next, but even though it’s “just” Aaron Loup, in the playoffs, after Cecil’s injury, we learned very quickly how important he is.

There’s still not a whole lot of left-handed depth on this team — but the Jays, even though it’s early days, seem to think they have something in Pat Venditte, the switch pitcher who was especially deadly against left-handers last year, holding them to a .104/.173/.234 line in a small sample for Oakland.

“He’s showed us something,” said John Gibbons, according to an Arden Zwelling tweet. “It’s a great, fun story, but the key is to get guys out. And he looks like he can do it.”

And elsewhere off the field we have… the guys who have been staying off the field. Particularly Jose Bautista, but also Edwin Encarnacion (recovering from an abscessed tooth), and Troy Tulowitzki — who we learned after today’s game will make his spring debut tomorrow. Russell Martin will catch his first game of the spring tomorrow as well.

This slow approach stuff was particularly relevant to today’s game, as Dr. Angus Mugford, the Jays’ new director of “high performance,” joined Mike Wilner and Shi Davidi in the radio booth for an inning today. I’d have to go listen back and pull out some quotes if I really wanted to do it justice, so all I’ll really say is that it was pretty interesting — and maybe interesting that the Jays would put Mugford “out there” in the media. Or at least as far out there as an MLB.com-only spring training radio broadcast.

It’s certainly the kind of thing that makes this new Jays regime look different than the old one — and not in a bad way — so maybe that’s part of what’s behind it? Either way, the amount of thought that’s being put into planning routines, nutrition, and the like, so as to maximize a player’s performance is kind of off the charts. Great stuff.

And Jose Bautista was particularly pleased with these new resources at his disposal, apparently — which makes sense, since Davidi explained on the broadcast how crazily regimented Bautista’s days are. He’ll have snack times scheduled to the precise minute.

That all falls well in line with this kind of talk:

As I tweeted myself, that’s all pretty great. Unless he breaks down anyway.

No need to worry about that for now though. And we’ll finally be seeing Jose back out on the field soon! Just not tomorrow, when the Jays are back at it again, taking on… um… Baltimore?

Who cares, it doesn’t matter!