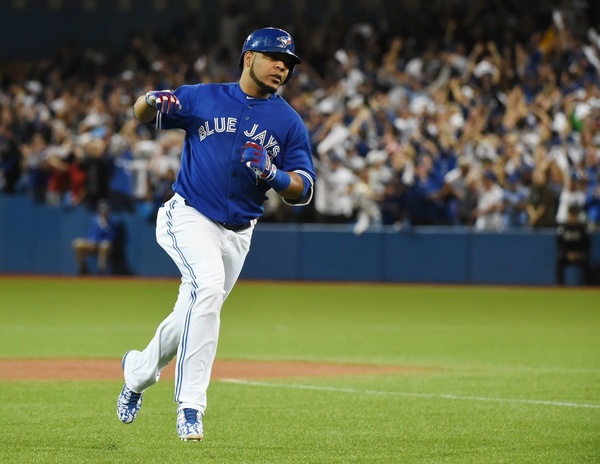 Bob Elliott continues to try to get to the bottom of the Edwin Encarnacion situation, doubling down in his piece today for the Toronto Sun on the suggestion of his “Encarnacion loyalist” from earlier in the week that the Jays have only offered Edwin a two-year extension. He’s also now spoken with the slugger, who says that he’s “really disappointed that nothing has happened, but it’s not my decision,” adding that “they don’t have it in their plans for me to stay here.”

Already one can see the potential for this to become yet another tricky PR situation for the Blue Jays. “It’s an insult!” they’ll say. “Where’s the respect???” But the thing — and the thing that someone like Jose Bautista would exactly tell you — is that it’s all about business.

Edwin Encarnacion is obviously an incredible hitter, and has been a terrific and hugely important Blue Jay — the sorts of things Elliott grimly hits on as he paints dark clouds hanging over the clubhouse — but honestly, how many teams would be willing to offer him a four- or five-year contract right now, with a full season still to go before that contract begins?

It’s hardly the be-all end-all, but the list at Baseball Reference of most similar players to Edwin through age 32 is comprised of a pretty eye-opening group of guys who didn’t exactly have long, productive careers beyond that point: Jermaine Dye, Danny Tartabull, Roger Maris, Pat Burrell, Tim Salmon, Eric Chavez, Frank Howard, Joe Carter, Darryl Strawberry. Four were finished at age 35 or younger, none played beyond age 38 — for whatever that’s worth.

Edwin’s last four years have been a stone bargain for the Blue Jays. He’s averaged 4.1 WAR over that span while making just $8- to $10-million per season. But, unfortunately for him, he’s already been paid for that production, and while his track record of excellence will inform the next contract that he signs, so will things like his age, his injury history, and his comparables.

And so too, for the Blue Jays, will their future flexibility.

Here’s where every fan understandably rolls their eyes. The Blue Jays, owned by Rogers and owning a territory of 35-million people to themselves (nearly the same population as the state California, which boasts five teams), shouldn’t have to be so concerned about flexibility — at least not when retaining a franchise icon is concerned. But they do. Whatever the complexities and frustrating stupidities of the relationship between club and ownership may be, we at least know full well by now that the Jays will be bound by a fairly rigid budget each year going forward. A budget that will limit them from doing every single thing they could possibly want to do. It’s just reality.

Also reality: the frightening lack of flexibility that a badly aging Blue Jays club will face in a year like 2019, for example, especially if they re-sign Encarnacion or Bautista (or both).

Already we know that they’ll have Russell Martin at age 36 making $20-million. Troy Tulowitzki making that same amount at age 34. Josh Donaldson making upwards of $25-million at age 33. Add another $50-million or more for Bautista (by then 38) and Encarnacion (36). Then consider that Marcus Stroman will make his third trip through arbitration heading into that season, Roberto Osuna and Aaron Sanchez their second, and that they’ll probably have to spend some significant free agent dollars on a starting pitcher at some point along the way, too.

I’m a huge fan of those players, and so I want to believe in those players and in the idea that they could still make up the hugely dangerous core of a contending team at that point, and for years beyond. I also think that even if they are deep into decline by then, if the trade-off is keeping the group together in 2017 and 2018 after the incredible ride that was 2015 and whatever big things are in store for this year, I can live with that.

But what if something here in 2016 changes that outlook?

It might not, and certainly nobody wants to believe that it will, but locking in Edwin or Jose right now for longer than two or three years beyond this one? You’re doing it with an absolutely crucial year of information not available.

One way to mitigate the risk of this coming year rendering an extension with Bautista or Encarnacion problematic before the contract even takes effect is to simply wait.

Waiting gets the Blue Jays that extra year of performance and health information, and and it allows them to see how the club’s season goes, both on the field and in terms of revenue, and decide then whether they can justify all those big, long-term contracts for their aging stars.

If the season goes as well as we think it will, the Jays then would still have the advantage of being a winning club in a city these players love, with teammates they love, and with a position wide open for them to return to. They could absolutely re-sign at that point, depending on what else the Jays will need to do with their freed budget dollars.

And if the season doesn’t go well? Maybe in that case they’re better off for not having signed players for market rates a year sooner than they had to.

That doesn’t mean that they couldn’t work out a deal right now that made sense for both sides, but if I’m the Jays, the other way to mitigate against the risks of the coming year is to fish for a potential bargain by offer something shorter term — not necessarily short on dollars, but something that makes the other side really have to think hard about what their market will actually be, and precisely what having to make a bet on the player’s health and performance — the one they’re asking clubs to make — feels like. After all, there’s not much Edwin can do over the next year to justify a longer contract than he’s currently asking for, but he could certainly end up costing himself.

That indeed seems to be what they’re thinking here. And while two years unquestionably seems light for Encarnacion, is it as a starting point? If it provokes Edwin’s camp into acquiescing to a deal of three years beyond this one, maybe the two sides can work something out before the season starts. And if they don’t, and if he stays mostly healthy and puts in another Edwin-like year, maybe the club will be willing to go that high or higher next fall. Or maybe the market won’t quite be where Edwin had hoped, and he still wants to stay, and they don’t even have to.

For the club, it’s a gamble, but it seems to me like the obvious smart play. It’s not unfair or insulting, and it doesn’t mean that he can’t be in their plans. It’s just business.