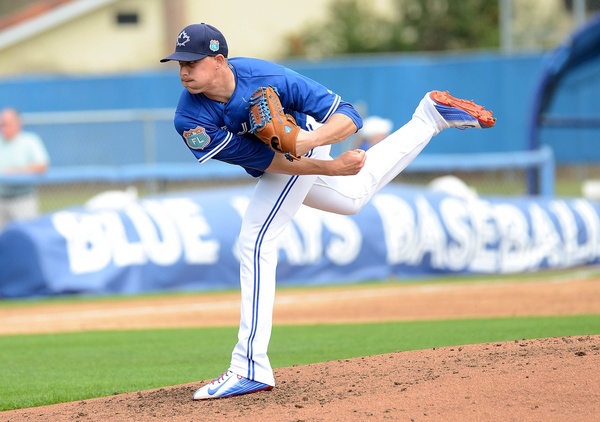 What is Aaron Sanchez? Is he a reliever, or a starter? This is the only real unanswered question for the Blue Jays this spring. Where does the hard-throwing right-hander fit?

The Blue Jays front office are doing their best to keep their rotation plans under wraps. Those eager to parse Mark Shapiro’s words find ample proof — the Jays president citing Sanchez’s “unknowns” — to suggest the new front office is leaning towards using Gavin Floyd as the fifth starter, with Sanchez relegated to the bullpen.

One thing we do know: Aaron Sanchez has great stuff but iffy command, a problem is that isn’t uncommon and isn’t unique to Sanchez. What is unique to Sanchez is arsenal. His unusual repertoire, along with his lackluster strikeout totals, makes him so tough to predict. It could also be the single biggest barrier to him becoming a successful starter.

Drafted by the previous regime, Shapiro, Atkins, et al are able to look at Sanchez with fresh eyes. If they see breaking balls and offspeed pitches unlikely to become consistently effective weapons, that means when they look at him, they see a reliever.

This spring, much as been made of Sanchez’s attempted mastery of both his curve and the change up, with some cutters thrown in for good measure. The Grapefruit League results are good but what if the brain trust is doing more than just looking at his stat line?

At some point, there needs to be a conversation about Sanchez’s ability — or lack thereof — to utilize those secondary offerings. There needs to be consideration given to the idea that he won’t develop not one but the two additional pitches required to take a regular turn in the rotation. Maybe wasting his bullets in minor league starts won’t accomplish much of anything, given his long history of professional instruction. What else do we expect him to learn?

We know Sanchez has been a professional baseball player for going on seven years now. We know that, despite making 97 starts between the minors, Arizona fall league, and the big leagues, he is basically a one-pitch pitcher.

To compliment his bowling ball sinker, an upper 90s two-seamer that induces copious ground balls and coaxes weak contact, Sanchez goes to the curveball as his favored breaking ball. Sinker/slider is a familiar profile, but sinker/curve? Much less common.

Former Orioles closer Jim Johnson is one such pitcher – he got by on ground balls and home run suppression for a while. And then he didn’t. Ex-Pirates starter and aspirated Roy Halladay clone Charlie Morton boasts a similar arsenal. He’s shown flashes of competence at times but spent the last five seasons tinkering with other pitches (a cutter, change, and eventually re-introducing his four-seamer) in pursuit of consistent results.

The list goes on, and it features mostly relievers. Adding to Sanchez’s problematic pitch profile are his troubling bouts with wildness. Yesterday on Blue Jays Nation, John Lott discussed pitchers who fizzled out after bouncing between the rotation and the bullpen. Many of those hurlers have something in common, beyond mistreatment at the hands of management: they never found reliable third pitches and struggled to throw strikes. Which sounds very familiar…

“Will Sanchez start?” is the only interesting spring question due to its perceived possible outcomes. While the arguments against placing him the rotation revolve around innings pitched and workloads, the reality for Aaron Sanchez might well be that his skills, while considerable, make him a reliever in the end.

Unless you think a guy with huge platoon splits and an on-again, off-again relationship with the strike zone can make it as a one-pitch starter, it’s time to embrace the idea of him in the bullpen. Without reliable secondary pitches, it’s better for him and for the club, both now and in the future.