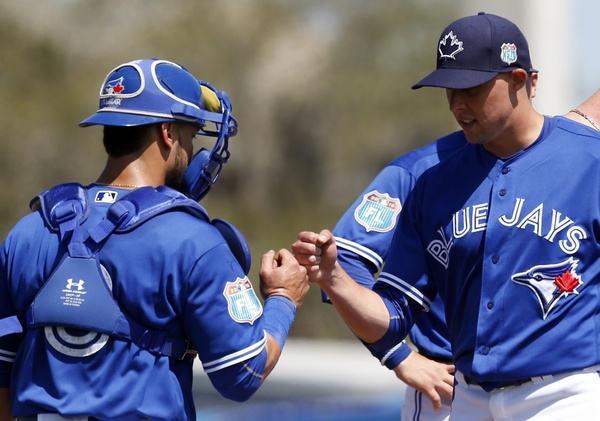 Aaron Sanchez produced another pretty little spring training line today against the Mets, as he continues to make the Blue Jays’ decision on what to do with him a difficult one. He’s done everything they’ve asked of him, and the results so far have been spectacular.

But here’s the thing about Aaron Sanchez that Jays fans and Jays management alike need to keep in mind before working themselves into a lather about what they’ve seen this spring: we know he can get right-handers out (in 2015 he held them to a ridiculous .162/.242/.194 line as a group over 47.1 innings/178 batters), and we know he can get minor leaguers out.

What really remains to be seen is whether he can get big league left-handers out — a question that revolves around his ability to harness his secondary stuff, and remains central to his future role.

Mike Wilner noted at one point during the audio broadcast of today’s game that Sanchez was struggling to throw his changeup for strikes — a problem he acknowledged he’d been having in his previous start.

That said, Sanchez’s results against lefties so far this spring have been very strong indeed. After going through his game logs, I’ve found 38 total batters faced, with Sanchez having given up just five hits and two walks while he’s struck out eight (21%).

All of that seems pretty good for a small sample. It’s encouraging! And I’m certainly not going to tell Jays fans not to be encouraged by what they’ve seen from him so far.

What’s not so encouraging, however, is the quality of left-handed hitters he’s faced. That’s obviously not in his control, and full credit to him for mowing down just about everybody who has stepped into the batter’s box to face him, regardless of which side of the plate they were on. But here’s a list of the left-handers (or switch hitters batting left) that Sanchez has faced so far this spring and the results he’s had against them.

Oh, there are certainly some big leaguers in that group, but Chris Davis and David Ortiz they are not. Let’s be honest: save for Conforto today, they’re probably not even Brock Holt, Jackie Bradley Jr., and Travis Shaw.

Which, again, isn’t to say that we shouldn’t be encouraged by the results Sanchez has produced. It’s to say that we can’t just extrapolate from what he’s done this spring and insist that he’s ready. Nor should the Blue Jays.

Nor should we let ourselves get filled with rage about it if they don’t.

The question of whether he can get big league lefties out on a regular basis simply can’t be answered by facing a bunch of flotsam.

Which isn’t to say that he can’t still be very effective despite a harsh platoon split (though one that should surely improve from last year’s disasterpiece). His wOBA against by lefties in 2015 is right in line with James Shields (though he had a bad year, don’t forget) and Andrew Cashner, for example. It’s just, to use three other examples, that he’s also in line with the non-Padre dumpster fires that used to be Ryan Vogelsong, Bud Norris, and Charlie Morton. And worse.

Cool your jets on this, is what I’m saying, kids. Don’t not get excited, but maybe just cool your jets a little here.