Home > 2016 > 03/28 > Aaron Sanchez Will Begin The Year In The Blue Jays’ Rotation, But Will Eventually Return To The Bullpen 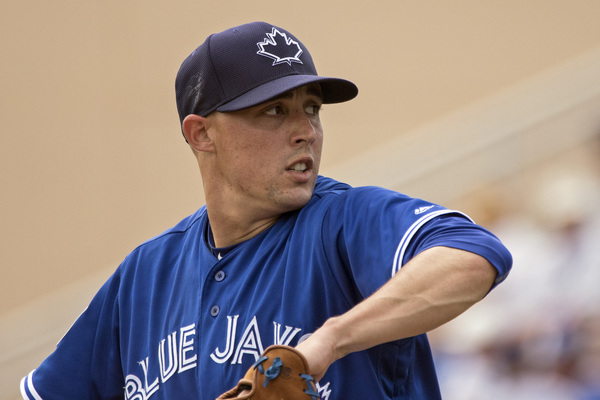 Aaron Sanchez will get his wish – for at least part of the season.

“I’m thrilled,” he said after learning that he will open the Blue Jays’ season as a starter. “This is one of the days that I’ve been waiting for.”

But Blue Jays manager John Gibbons also made it clear that the Jays will impose an innings limit on the 23-year-old right-hander. That will likely mean sending him back to the bullpen, where he excelled down the stretch last year, at some point later in the season.

“I don’t see him pitching the whole year as a starter,” Gibbons said, “because I think it’d be harmful to him. We’ve got to be smart about this too – his future.”

Over six seasons in pro ball, Sanchez has never worked more than the 133.1 total innings he threw in 2014. Last year, between 11 starts and 30 relief appearances, he pitched 92.1 innings.

Sanchez himself said he has not been advised of a specific innings limit or the timing of a move back to the bullpen.

“The main key is just pitching all year and finding a way to do that,” he said. “I don’t know how that’s going to happen. I know we talked about maybe going down to the ‘pen. I feel like we’ll deal with that when the time comes. My main goal is to just pitch from start to finish.”

And when pressed, Gibbons refused to take the bait about how many innings the Jays have in mind.

“We’re talking about that, but we’re never going to come out and reveal what that is. It gives you guys too much red meat,” Gibbons replied.

The starter-vs.-reliever debate provided plenty of red meat all spring for fans and media types. And in the Blue Jays’ front office, there was no unanimity about which way to go until the past few days.

The decision smacks of a compromise of sorts.

Sanchez, who stands 6-foot-4, added 20 pounds during a grueling workout regimen with his buddy Marcus Stroman in the off-season in hopes they could finally become rotation mates. Sanchez came to camp determined to start, and over five spring outings he allowed three runs in 20 innings with 19 strikeouts and three walks.

But those who favoured a relief role figured that with Sanchez, Brett Cecil, Drew Storen and Roberto Osuna at the back of the bullpen, the Jays would have a better chance of protecting early leads. And with a strong offence, the argument went, the team could get by with Gavin Floyd, for example, in the fifth starter’s role.

By late summer, whether it’s Floyd, or Jesse Chavez, or the just-demoted Drew Hutchison, someone else will fill Sanchez’s spot. Or perhaps, at the trade deadline, another starter will become available, just about at the time Sanchez moves to the ‘pen.

I asked Gibbons – who always wanted Sanchez to start ­– whether there were strong views on both sides in the front-office debate.

“Oh yeah,” Gibbons said, “I totally understand it. I [acknowledged] too how much stronger that might make our bullpen possibly. If we didn’t have guys like Jesse Chavez down there, I think [he’s] going to be really big down there. He could pitch some late inning roles. I think even Gavin Floyd could pitch in some good roles down there late.”

Floyd was Sanchez’s main rival for the vacant starter’s spot. He will pitch in middle relief. Hutchison, who also has pitched well this spring, was sent to Triple-A Buffalo.

Sanchez said the strength he developed from his conditioning and weight gain has made his delivery more effortless and his fastball command more precise.

“In terms of secondary pitches, I think I’ve made tremendous strides with everything,” he said. “The cutter is still lacking, but that’s something that’s a work in progress and will continue to be  a work in progress. I think my three-pitch mix is right where it needs to be and I’m ready to attack 2016.”

When he got the call to the office Monday morning, where was his anxiety level?

“I think I had anxiety the last four days, just the suspense, man, of not knowing what I’m doing, feeling like I did everything I could do and just letting the chips fall where they may,” he said. “I’m thrilled about the news, but now it’s time to work.”

He said he has not been told where he will slot into the rotation. And Gibbons wasn’t saying either. Too much red meat, probably.