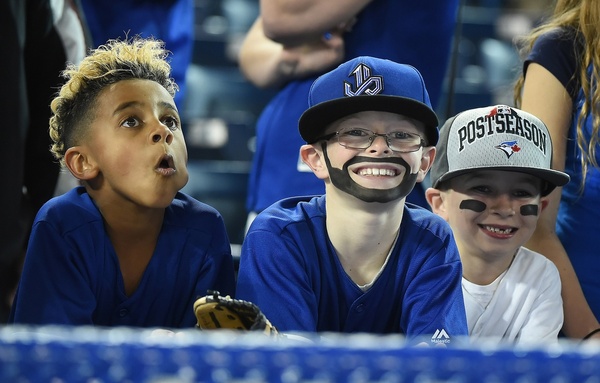 Baseball is back in the city of Toronto. Those are some fine words for a chilly day in April with so much promise ahead of us.

It’s easy to get a bit maudlin about it when days like this come around — especially if, y’know, you’ve already been drinking — but that’s probably mostly because it’s fairly understandable. Winter’s end is a powerful aphrodisiac, spring training is just a giant tease, and so every year when this day comes, whether our optimism is false or genuine, there are some pretty great things to feel and to celebrate. So let’s party.

The Jays’ home opener is traditionally exactly that, but this time around it feels like it’s going to be more about baseball than bacchanal. I’m hopeful of that, at least. It should be.

The first DJF post I ever wrote was in late December of 2006, making this the 10th home opener that I’ve written about, and I don’t think I have to tell you, there’s been none other like it. Not even the pomp of 2013, after the Jays won the off-season with their splashy trades and signings, which so quickly slipped away and rolled to the backstop, like so many knuckleballs off JP Arencibia’s glove.

It has been so fun to be a Blue Jays fan over the last eight months. When winning is the backdrop, all the other up-and-down bullshit is just part of a great ride. And the Blue Jays are going to win a whole lot of games this season. They probably should have won four already, frankly!

And they may not win tonight. And we don’t even get to see David Price on the mound this weekend. And Josh Donaldson’s balky calf muscle is forcing him to DH. But so what? Who even cares that the Flight Deck is closed for a private event tonight? Its time is coming.

To regularly be at the Rogers Centre late last summer was an incredible thing to experience. This time we might get six months of that? Seven months? It’s hardly out of the question. But you never know what might happen, either. So let’s not take it for granted, and let’s get back into that spirit of last October.

Let’s fucking do it again.

Some notes from Mark Shapiro, who spoke to reporters ahead of tonight’s game: Brendan Kennedy tweets that Shapiro says he doesn’t agree with John Gibbons’ “dresses” comment, but the organization won’t act on it. Arden Zwelling adds that Shapiro sounded positive about being able to get a deal done with the city of Dunedin to keep the Jays’ spring home there.

Mike Harrington of the Buffalo News writes about Shapiro’s comments on the relationship between the Jays and the Bisons, which there is no reason to discontinue, Shapiro says.

Don’t forget, here at BlueJaysNation.com we have a contest going with JUST EAT that could net you a voucher for $250 worth of their food, if you’re in the GTA. Find out how.