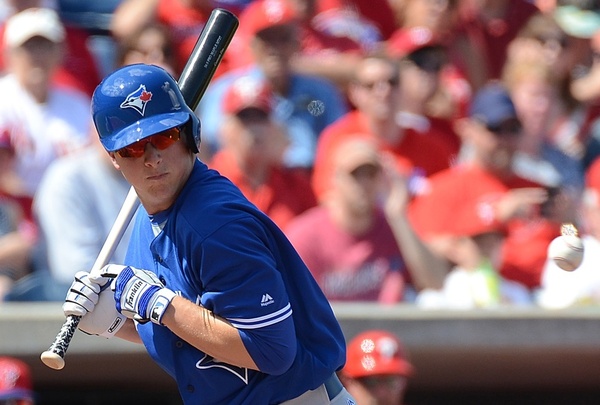 With Josh Donaldson still smarting from taking a Liam Hendriks pitch over the weekend, the Blue Jays have elected to recall 3B Matt Dominguez from Buffalo, according to a tweet from Ben Nicholson-Smith of Sportsnet.

Dominguez can play both third and first base, which made him a more attractive candidate to the Jays than, say, Jesus Montero. Now that Montero has given up his catcher’s gear for a first baseman’s glove, he’d have been a more like-for-like candidate to replace Chris Colabello on the roster (which is essentially what this move is doing), but as we saw on Monday night, the Jays are awfully thin on infield depth when Donaldson is at DH, and both Darwin Barney and Ryan Goins are in the lineup.

He’s also a right-handed bat, who will prove useful against the left-handers that the White Sox will throw against the Jays on Tuesday and Wednesday. Justin Smoak vs. Chris Sale just wasn’t meant to be, I guess.

He can also be optioned back to the minors (according to Bluebird Banter’s ultra-helpful option and outright status table) when his time with the big club ends, which will likely be the next time the Jays feel they need an extra reliever, but could theoretically could last until Devon Travis gets healthy. Or if there’s a setback there, maybe even until Colabello is ready to return which… I wonder how that’s going, by the way…

One Blue Jay told TSN.ca, speaking on the condition of anonymity, that Colabello remains despondent and confused in the wake of his positive test. This player said he views performance enhancing drug use with great suspicion yet is inclined to believe Colabello’s story.

Not much that can be done about that now, of course. And as MacArthur does well to point out, Colabello is at least the very least guilty of ignorance over what he was putting into his body.

Anyway, I think we’ve talked about that enough. On to Colabello 2.0! Let’s hope the luck dragons smile on Dominguez as much as they did his predecessor!