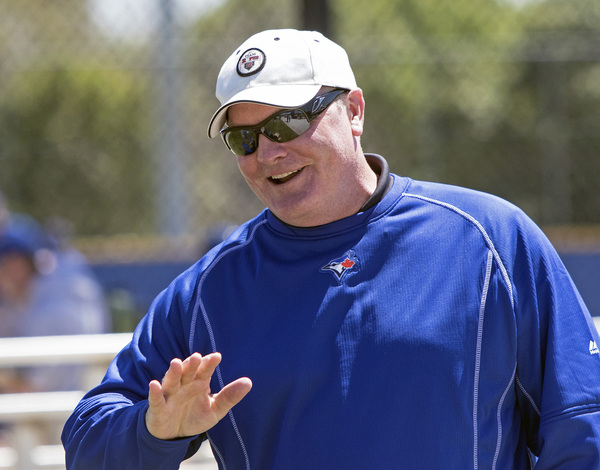 I thought the story would make a good ice-breaker.

So when I introduced myself to Eric Wedge during spring training, I recalled the first time I saw him – in 1989, when, as a freshly drafted catcher in the Boston Red Sox organization, he was playing for the Elmira Pioneers against a new Pittsburgh Pirates affiliate in Welland, Ont.

That night had stuck in my mind for all these years because, when Wedge came to bat in the third inning, he fouled off a pitch that somehow hit him on the hand on a checked swing. An argument ensued over whether he deserved to take first base. Then the Elmira trainer spent a good five minutes examining Wedge’s hand while Wedge flexed his fingers and grimaced – in retrospect, this might have been a touch of melodrama for the umpire’s benefit – before the game resumed.

And when it did, Wedge, sore hand and all, hit a grand-slam home run.

Twenty-seven years later, Wedge remembered none of it.

“That would have been my first year in pro ball,” he said. “I remember playing in Welland. I think I might have hit a couple of home runs there. I don’t remember a grand slam.”

I had come to interview Wedge about his new job with the Toronto Blue Jays, and about that convenient narrative that immediately dubbed him a manager-in-waiting, a vulture circling the rotting carcass of John Gibbons in case the Blue Jays got off to a shaky start.

But for a moment there, I wondered if I was wrong about what happened that night in Welland. I remembered a batter with a sore hand hitting a grand-slam. Or maybe it wasn’t a slam. Geez, maybe it wasn’t even Eric Wedge.

It took some digging to get to the truth.

Eric Wedge managed in the big leagues for 10 years and was manager of the year in 2007 with the Cleveland Indians, whose general manager at the time was Mark Shapiro. (If Stoeten had written that sentence, he would have inserted *COUGH* at least twice, but I digress.) Since quitting as the Mariners’ manager at the end of the 2013 season – and firing a strident volley of criticism at the Seattle front office on his way out the door – he had been working as a commentator on ESPN.

His name was among the first that Shapiro, the new president, and Ross Atkins, the new GM, mentioned when they listed their chief cronies after they arrived in Toronto. So it was no surprise that Wedge was soon hired as an “advisor” in player development.

“The appeal initially was the people – my relationship with Mark Shapiro and Ross Atkins – and the fact that I was interested in doing something that I haven’t done before, and my excitement about being a part of the player development system,” Wedge says. “I’ve always been passionate about young players in the game, and helping to make a difference for them on and off the field.”

So you’re not just hanging around, waiting for Shapiro to kick Gibbons to the curb?

Wedge laughs at the suggestion.

“I just squash it right away,” he says. “Anybody that knows me, I’m not the type of guy with an agenda. I wouldn’t be here if I was that person. I have no desire to manage the Toronto Blue Jays.”

He reiterates his enthusiasm for a chance to learn something new in player development. Then he adds: “Yeah, I’d like to manage down the road, but I’m in no hurry to do it. John Gibbons is a heck of a manager, and we go way back.”

Back to 2001, when both were managers in the International League. Wedge managed Triple-A Buffalo, then a Cleveland affiliate, and Gibbons skippered the Mets’ top farm club in Norfolk. Subsequently, they managed against each other in the big leagues. In 2006, both were American League coaches in the All-Star Game in Detroit.

It is still early days in the new Blue Jays regime. Wedge is one of a slew of new staff – no, not all of them with ties to Cleveland – who are rebuilding the club’s front office in Shapiro’s image. It will take time for all the systems to synchronize.

“We know what we want to end up with, but how to navigate getting there, that’s another thing,” Wedge says. “The first thing you have to do is get to know everybody in the system, from front office to field staff to your scouts, and from my standpoint, more so everybody in the player development system.

“Incrementally, you implement your process and in time, you hope to have everything in place that’s the essence of what you want, which is to give every player every opportunity to be the best player that they can be and the best person they can be, on and off the field.”

It is clear that Eric Wedge has spent a fair amount of time listening to Mark Shapiro. 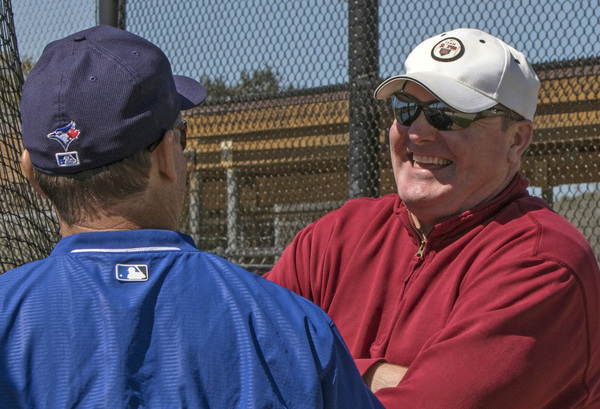 Wedge wound up in Welland that night in 1989 because the Red Sox drafted him out of Wichita State in the third round that year, four picks after the Jays took a first baseman-pitcher named John Olerud.

“Eric was a football-mentality type of guy,” says Paul Quantrill, a Port Hope, Ont. native and a Wedge teammate that year in Elmira. “He was always so fired up. He had a hard time letting go of a bad at-bat. He was a perfectionist. He was also an awesome teammate and one of my closest friends as we were coming up in the Red Sox system.”

In a nine-year pro career, Wedge appeared in just 39 big-league games and batted .233. But like Gibbons and many other journeymen catchers, he showed leadership potential early on. He was only 33 when he took over in Buffalo in 2001 and 35 when Shapiro hired him to manage the Indians.

In 1989, though, Wedge loomed as a future catcher for the Red Sox, who assigned him to short-season Elmira in the New York-Penn League. Welland landed a franchise in that league that year as a Pirates’ affiliate, playing in a spanking new sports complex. The new stadium, however, was not finished in time for the start of the season, so the Pirates opened in a cozy town park with stadium seating imported for the occasion.

I occupied one of those seats, which offered a close-up look at Welland’s third baseman, Tim Wakefield, who was already proving he could not hit but had not yet moved on to his renowned love affair with the knuckleball.

And I was in the new stadium on Saturday night, July 22, when the Elmira Pioneers played a doubleheader in Welland. I was sure I saw Eric Wedge hit a grand slam. After talking to Wedge, I wasn’t sure at all.

The Welland Pirates lasted only six seasons. It was unsurprising that I couldn’t find much about their history, let alone their box scores, online. I sent messages to newspapers in Welland and Elmira asking if they could find a story or box score. They did not reply.

So wedded am I to the internet that I was ready to abandon the search. But finally, and somewhat sheepishly, it dawned on me to seek help from a legacy source. I called the Welland Public Library.

The next day, I received an email from Cathy Comar, the librarian who looks after local history matters. Attached was a copy of a page from the Welland Tribune of Monday, July 24, 1989, filled with accounts of three weekend games.

My eyes lit up when I found this sentence: “A walk by Javier Magria with two out loaded the bases and opened the door for Eric Wedge, who blasted a Magria offering high over the left-field fence.”

The story also says that Paul Quantrill pitched a scoreless inning of relief for the winners.

“I don’t remember the game but I remember playing in Welland,” Quantrill says. “They had a great new stadium. It was my first year in pro ball and that place felt like the big leagues to me.”

Now, both Wedge and Quantrill work as advisors to the Blue Jays’ front office.

I sent Cathy Comar a note of thanks for producing proof that I can still remember details from a 27-year-old baseball game, even if I can’t remember which day to put the garbage out.

She replied: “I used to bring my son to these games! A memory tweak to me as well!”

I was somewhat older. My memory for detail isn’t that sharp, of course, and I’d rather not do the math.