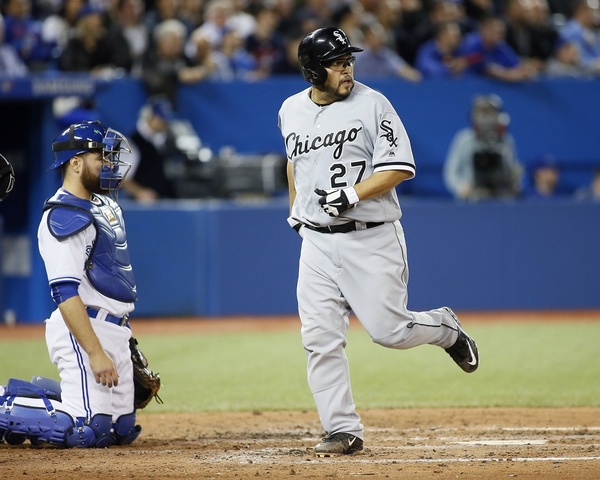 When you’re second in the majors in strikeouts, it probably follows that you’re also among the leaders in carping at umpires.

Blue Jays’ batters did a lot of grousing and moaning at plate ump John Tumpane on Wednesday night, occasionally with good reason. That trend started early this season, and so did the Jays’ ferocious strikeout pace, which has now reached 217 in 23 games. That’s 9.4 per game, roughly one per inning. Last year, with essentially the same offence, they averaged 7.1 strikeouts per game.

Let’s get this out of the way: on almost any given night, the men who call balls and strikes continue to make a strong case for robots to do their job. Their inconsistency and their determination to personalize the strike zone makes one wonder just how MLB’s umpiring supervisors occupy their time.

But this is not new. It has been evident since technology let fans see for themselves. It was the same last year, when the Jays’ vaunted offence scored 127 more runs than anyone else.

The Jays struck out 13 times in a 4-0 loss as the White Sox completed a three-game sweep Wednesday night. They struck out 31 times in the series. Granted, the White Sox (2.24 team ERA) are pitching better than anybody else in the world right now.

“Nothing good can happen when you’re striking out, other than maybe staying out of a double play sometimes,” said manager John Gibbons, seemingly seeking solace where none exists.

“A lot of times strikeouts happen when you’re not staying on the ball long enough, if you’re not willing to use the opposite field,” he said.

Sure, it’s early, and the strikeout trend certainly could change. But equally alarming so far has been the number of good pitches that Jays’ hitters have either taken or failed to hit hard. They have often looked tentative and defensive.

Russell Martin struck out in all four at-bats Wednesday, extending a personal slump. In 56 at-bats, he has struck out 29 times.

Asked about the team’s strikeout contagion, Martin said, “It’s kind of tough to tell. Right now, I’m just trying to get myself going. I feel like we’ve just got to keep grinding.”

Which, when an offence is averaging 3.96 runs per game, is about all anyone can say.

Except for this: speaking to Sportsnet’s Shi Davidi, Josh Donaldson intimated that his teammates need to bear down and step up with better at-bats. Stop giving in, no matter how good the pitcher happens to be.

“I feel like we need to do a better job of being good hitters,” Donaldson told Davidi.

Which wouldn’t take much, given the way things are going.

The team’s current offensive funk reminded me of something Cito Gaston told me back in 2001, when he was the Jays’ hitting coach, between his two terms as manager.

“I’ve got 14 hitters,” Gaston said. “They’re never all going good at one time. But they can all go bad at once.”

And if you’re looking for another cause for alarm, consider this: Marco Estrada, who pitched six brilliant innings before fading in the seventh, was seen repeatedly rubbing his shoulder during the game.

Asked about his shoulder after the game, Estrada replied: “It didn’t feel very good.”

He paused and looked at the floor.

Gibbons was asked about Estrada’s shoulder too. His reply: “I don’t know anything about that.”

Despite Estrada’s pitch count and whatever was going on with his shoulder, he had allowed only two hits before he gave up a two-run triple to ex-Jay Dioner Navarro – his primary catcher last year – with two outs in the seventh. Gibbons said he did not consider lifting his pitcher before he faced a batter who probably knows Estrada better than anybody.

Gibbons said Estrada had been “so good, (and) we’ve been scuffling a little bit in the pen anyway.”

Which brings us to Drew Storen, the former Washington closer who was generally regarded as the Jays’ biggest acquisition of the off-season. But in short order, he has become a poster boy for the bullpen woes that have badgered the club during April.

On Tuesday night, Storen staggered through his worst outing of the season after Gibbons summoned him to mop up in the ninth with the Jays’ trailing 8-1. He recorded only one out, gave up four hits, including a leadoff homer, and three runs.

On Wednesday afternoon, Storen said he feels fine physically, but is not entirely comfortable with his mechanics and the challenge of adjusting to a new league.

“It’s all learning new hitters,” he said. “It’s getting comfortable with catchers. It was kind of an autopilot situation the last couple years for me, kind of the same game over and over again, facing similar guys. It’s kind of like making it to the big leagues all over again.”

The learning curve with the hitters is understandable. Getting comfy with catchers, after six weeks of spring training and nine outings in the new season, seems a little less so.

In his nine games, covering 7.2 innings, Storen has allowed 13 hits and eight runs. His strikeout and swinging-strike rates are way down from last year and his rate of hard contact (42.9 percent) is way up, according to FanGraphs.com.

“It’s just locking in and getting muscle memory,” he said. “Early in the season, it’s just getting a rhythm more than anything. I’m always kind of making adjustments. The numbers aren’t really where I want them to be but I’m confident they’re going to get there. I’ve been able to execute, but not as much as I want to. I haven’t had the dominant innings that I’ve really had before, but I’m confident that it’s going to happen.”

Advice to Michael Saunders: stock up on tart cherry juice.

And if you happen to be fighting inflammation, that goes for you too.

This morsel of medical guidance comes directly from Blue Jays’ head trainer George Poulis, who, for the first time in his 14 years on the job, is being permitted to talk to the media about injury issues.

Former general manager Alex Anthopoulos was adamant: injury information would come from him alone, and woe to the trainer who violated the gag order. But in Cleveland, the head trainer routinely updates reporters about injuries, and Cleveland, of course, is the baseball orchard that nurtured new Jays president Mark Shapiro and GM Ross Atkins.

So there was Poulis on Wednesday afternoon, taking media questions in his second scrum of the season, and one of the discussion topics focused on tart cherry drinks.

This subject arose after Poulis said the Jays new high-performance team is doing a full-court press on outfielder Michael Saunders, who is coming back from serious knee surgery and battling a nagging hamstring problem.

Poulis mentioned that Saunders is getting advice from various specialists, including a nutritionist. That led a reporter to ask how a nutritionist can help fix a sore hamstring.

“Say you eat a lot of sugar,” Poulis replied, no doubt causing a collective wince from the paragons of fitness in his audience. “A lot of sugar products can cause inflammation in your body … In a nutshell, our nutritionist will recommend an anti-inflammatory type diet, which helps with recovery.”

Asked to elaborate, he suggested consuming tart cherry juice, because it is “known to have anti-oxidant, anti-inflammatory properties.”

In the case of Saunders, and every injured player, the new high-performance department teams up in the recovery effort, Poulis said.

The high-performance team has been busy. Here is the list of players Poulis talked about on Wednesday.

Devon Travis: The second baseman’s long recovery from shoulder surgery is scheduled to take an important step forward on Friday, when he gets three or four at-bats in an intra-squad game of minor-leaguers in extended spring training at the Jays’ complex in Dunedin. But no one knows when Travis will be ready to return to the majors. “We’re very optimistic, but no timeline right now,” Poulis said.

Bo Schultz: The reliever is scheduled to start a rehab assignment with Class A Dunedin on Friday. Schultz is recovering from off-season hip surgery.

Franklin Morales: The lefty reliever worked in only one game after his late signing, then experienced shoulder fatigue when he warmed up the next time and landed on the DL. Morales had thrown only four innings in spring training with the Brewers and had not sufficiently built up his arm strength. He is progressing in his throwing program on flat ground and will throw off a mound in the next few days, Poulis said.

Aaron Loup: He battled two separate injuries near his throwing elbow this spring, but is doing well on flat ground and is scheduled to throw a bullpen session in Florida on Monday.

Anthony Alford: The Jays’ top prospect jammed his knee sliding into home plate in Dunedin’s first game of the season and has been on the DL since then. However, he did play five innings in an extended spring-training game on Wednesday and is scheduled to do the same Thursday. Alford, a fleet outfielder, is wearing a brace to protect the knee ligaments that were “stressed slightly” in that slide, Poulis said.