Okay, I certainly hope I’m not jinxing anything here, but based off of the way things have gone for him this season, seeing Chris Archer’s name on the lineup card today isn’t inducing the same sense of worry as it usually does. Of course, this is still Chris Archer we’re talking about here. You know, the guy who can make Jose Bautista look like Kevin Pillar with his remote controlled slider, and even though he’s having far and away the worst season of his career (it’s early, obviously), he isn’t really somebody that you expect to knock around.

I don’t know. I’ve got mixed feelings here. I want to believe that Archer is going to continue struggling, but then I look at his strikeout rates, then the Blue Jays hitters’ strikeout rates, and I don’t see the greatest combination. You can’t predict baseball, so I’ll talk about what happened yesterday instead.

Let’s start with Aaron Sanchez, who deserves the gold star for this game. I’m not sure if Kevin Cash forgot to do his homework, or if he really want to do the Jays a solid because he genuinely enjoyed his time in Toronto as a backup catcher, or if he felt bad for Aaron after he got smacked around by Oakland last week, but for whatever reason, he certainly did his best to make Sanchez’s life easy by not loading the Rays’ lineup with left-handed batters. Instead, he did a nice split up kind of thing in which Sanchez never had to face two lefties in a row.

And it worked out great! Sanchez struggles with lefties, as we all know (he’s allowing a .239/.329/.418 slash against them this season) based on the way he pitched against the lefty-stacked lineup Oakland trotted out there last week. But this time around, since he didn’t have to navigate through a gauntlet of left-handed hitters he basically carved up Tampa Bay’s lineup, scattering six hits, two walks, and collecting six strikeouts through seven scoreless innings.

As much as I’m crediting Cash’s bad lineup composition for Sanchez’s great start, Aaron deserves a pat on the back for pitching a good game himself, too. In the first inning, he allowed back-to-back singles to start the game, but he stranded them by striking out Evan Longoria and Corey Dickerson (a lefty!), which was impressive. He did the same thing again in the third, sitting down both Longoria and Dickerson with two runners on base.

Sanchez was relieved by Drew Storen, who allowed a homer to Brad Miller (???) and then got one guy out before giving the ball to Brett Cecil, who finished off the eighth inning with a groundout and a really nice strikeout. Roberto Osuna came in for the ninth, allowed a double and a single, but stayed composed and shut it down, such as he always does.

In terms of the offence, this was closer to a Blue Jays big bats game than what we’ve been exposed to recently. Drew Smyly pitched a really good game, but allowed two solo home runs to Michael Saunders and Josh Donaldson, which happened to be the only two hits he allowed over six innings. Saunders grabbed another home run in the eighth (three of his four homers this season have come against the Rays, I guess it’s because he hates Tropicana Field even more than he hates underground sprinkler systems), Justin Smoak singled with the bases loaded to cash in a couple more, and Ryan Goins smacked a home run to opposite field (tripling his wRC+ in the process) just for the hell of it.

They still struck out a bunch, eight times to be exact, but it was nice watching this lineup smash some home runs. Michael Saunders thinks they’re close to firing on all cylinders. I hope he’s right.

Michael Saunders: “I feel like it’s only a matter of time before we click on all cylinders” #BlueJays

Brandon Holmyard at Jays Journal did a pitching prospect update, which features some good news about guys doing really well in Lansing, and some bad news about some guys who should be doing better than they are. Check this out if you haven’t heard about Francisco Rios, he’s tearing it up in Lansing, which is exciting.

Gregor Chishom has an update on Devon Travis at MLB.com that I’m sure everybody has seen at this point. Travis played a game at extended spring training, taking five at bats but not playing second base. He’s still a ways away from returning, but it’s a step in the right direction.

According to MLB Trade Rumours via a tweet from Jon Heyman, Jose Bautista may be willing to relax a little on his $150 million, five-year contract demands, but he doesn’t think the soon-to-be free agent will go any lower than $100 million.

I mentioned it earlier, but Chris Archer hasn’t been himself this season. Does that mean the Jays are going to have a good time today? Not necessarily, this is still Archer, he’s still good, and he’s still striking guys out at an elite clip, of course, but I feel better heading into a game with him starting than I usually do, if that means anything (it doesn’t). Anyways, Archer has posted a terrible 5.47 ERA through 26.1 innings (five starts) this year. He’s got a career-high 13.3 strikeouts per nine, he isn’t walking anyone, but he’s allowing waaaaay more home runs than usual. Apparently this is because his slider isn’t quite moving as much as it usually does.

But in his last start, Archer managed to pick up his first win of the season against the Disgusting Orioles, shutting them out through six-and-two-thirds innings, which could be a sign that he’s got it all figured out and all this stuff I’m babbling about is moot.

On the other side, the Jays are countering with J.A. Happ, who’s been excellent this season. Jays’ Ace has gone 26 innings through his first four starts, and he’s allowed only seven runs. Though he isn’t striking anybody out, he’s done an excellent job at keeping the ball on the ground, which is a good thing to do when you’ve got Josh Donaldson and Troy Tulowitzki playing behind you. 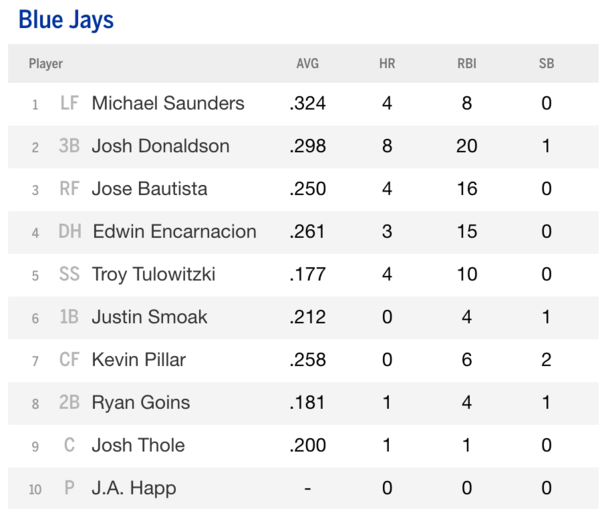 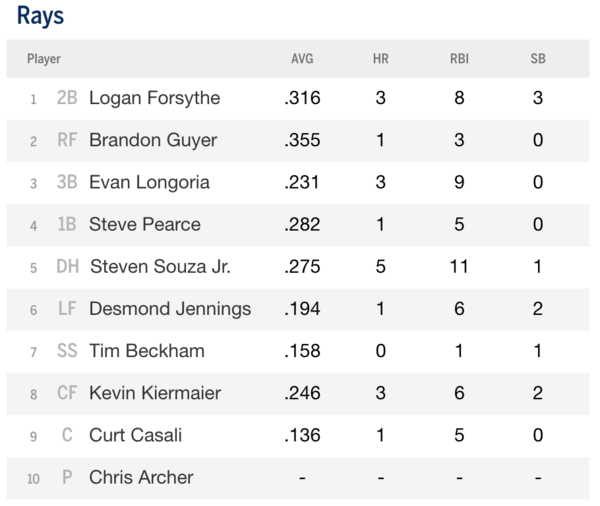 Weekly Rumours – Timing is Everything

WDYTT: How to fix the Canucks’ dismal special teams