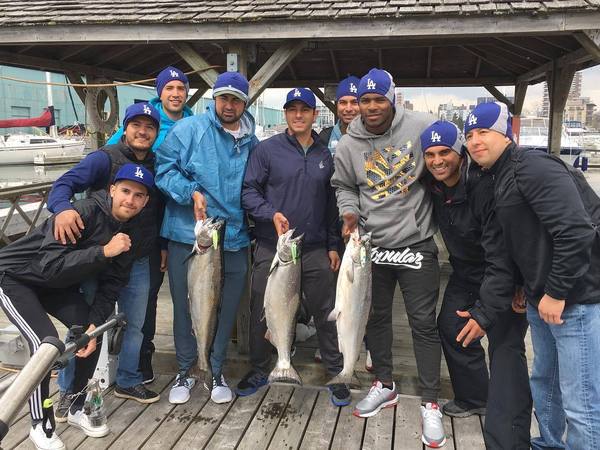 On Wednesday night, the Los Angeles Dodgers played in Tampa, losing 8-5 to the Rays. The game began at 7:10 PM ET and, according to the box score at MLB.com, lasted three hours and 21 minutes. That means they probably weren’t on their way to the airport until something like 11:30. The team then had to board their plane, fly to Toronto (where they play the Blue Jays in a three-game weekend set starting tonight), go through customs, then bus downtown to their hotel before they could finally check in and get some sleep.

That’s a fairly late night for the club, but with an off-day on Thursday they could have easily just spent a nice, relaxing day here in the city to make sure they were well-rested and ready to go for when the series begins.

Orrrrrrrrrr they could have been crazy people, waking up at the crack of dawn to go fishing in Lake Ontario in cold-ass early May. Like Yasiel Puig and Adrian Gonzalez did.

And I know what you’re thinking, but it’s really not Tampa! Puig has another Instagram pic that indicates that he is indeed “Fishing, Lake Ontario.”

This has had an especially profound effect on our dear friend, the Zubes, it seems…

Honestly this photo should be in an Ontario tourism brochure

@DrewGROF the thought of how excited Puig had to have been to get up and go is absolutely killing me right now.

lol man my mind is spinning! What did he do with this big ass fish he caught? Did he actually make sushi lmaooo https://t.co/0kLciFiSYj

Like, Yasiel Puig came to Toronto in early May and someone said “You’ve GOT to go fishing here” ???

What a catch!! check it out on my Snapchat: https://t.co/WfSZ7zG3re pic.twitter.com/snTeCFoF1G

I have another dozen questions about the Puig fish but I will keep them to myself.

(Sent while staring intently at the lake and wondering)

The punches. The hash tags. The sushi? The…everything.

I love this so much.

Jake Muzzin stretchered off the ice in third period