In his last few starts, R.A. Dickey has been solid, but he didn’t have anything to show for it. Last weekend against the Dodgers, Dickey tossed 7.0 innings and gave up four runs, just two of them earned thanks to some ugly fielding behind him, resulting in a loss. The time before that, against the Rangers, Dickey went six-and-a-third, allowing only one run on six hits, but earning a no decision.

And today, after dealing with some terrible luck over his past few starts, Marco Estrada will also seek his first win since his first start of the season. From my memory, he tends to pitch well in Texas.

It felt like a loooooooooong time between games, as an entire 48 hours passed between when Ryan Tepera walked the world in the bottom of the 13 inning for a walk off loss in San Fransisco and when Martin Perez got things rolling yesterday.

That’s what happens when you play an afternoon game before an off day, it begins to feel like a dizzying purgatory in which you obsess and overthink the pervious game. So this was probably one that Jays fans really needed, because not only did Wednesday afternoon’s loss suck, but it was left to rot for the next two days.

And thankfully, R.A. Dickey came through for us, tossing easily his best start of the season en route to a victory backed by home runs from Edwin Encarnacion and Troy Tulowitzki. The Rangers only mustered three hits and one walk off of Dickey and Chad Girodo, who came in to pitch a clean ninth inning.

Gregor Chisholm tweeted today to let us know that Jose Bautista will play in his 1000th career game as a Blue Jay, which, like he said, seems nuts. It feels like just a coupe years ago Bautista was a replacement-level fourth outfielder with the Pirates. Damn, this guy’s career has been a treat to watch.

I wonder if the fans at Arlington will give him a standing ovation?

Tonight will be game No. 1000 for Jose Bautista in a #BlueJays uniform. Ranks 11th on the club’s all-time list. Time flies.

Speaking of milestones, Tulo’s home run in the eighth yesterday off of Tom Wilhelmsen was his 200th of his career, putting him into some pretty elite company among power-hitting shortstops.

Congratulations to Troy Tulowitzki! His 8th inning homer was the 200th of his career! #OurMoment pic.twitter.com/8TfvBgXvIR

First and foremost, Colby Lewis gets the ball for the Rangers, which should be a good thing for the Jays, as he’s always been one to allow a whole bunch of home runs. That said, he’s been solid over his past few starts, including a strong seven inning, three run performance against the Jays last week.

Marco Estrada has been damn good this season, even though he doesn’t have much to show for it. In his last two starts, he’s gone 13 innings, allowing just two earned runs on five hits and three walks while striking out 11. That’s pretty much on par with his season totals, which sit at an impressive 2.39 ERA, 1.08 WHIP, and 8.6 strikeouts per nine.

So it would be nice if the bats could get some runs for him, and it would be even nicer if the bullpen could hang on to one of the leads he gives them! 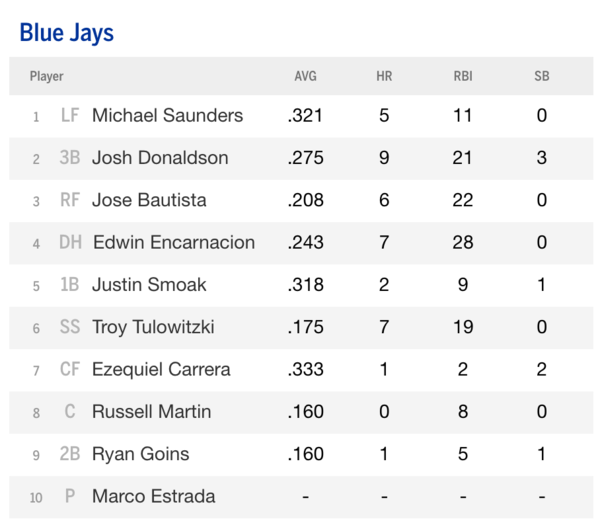 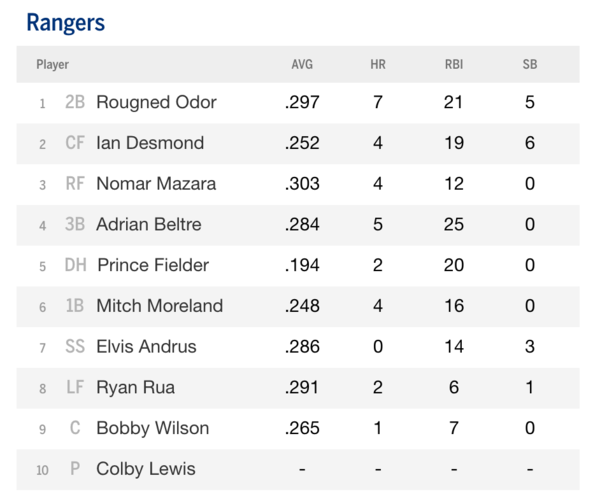