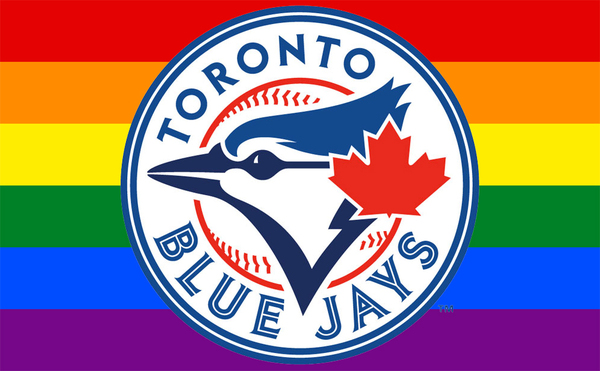 Tonight, before the Toronto Blue Jays face the Baltimore Orioles, Rachel Lauren Clark will become the first openly trans person to throw out a ceremonial pitch for the team. The Pride Toronto Board Secretary, who has been a baseball fan since the eighties, sees the moment as a way to convey to young people that the ballpark can and should be a safe place for all fans.

“I’m very pleased to represent the LGBT community and especially transgender and genderqueer people, for whom which going out to the baseball game is not always accessible,” Clark said in a Pride Toronto media release. “I hope this historic moment will send a message that everyone, regardless of their sexual orientation or gender identity will, as Robert Frost once eloquently put, ‘never feel more at home than at a ballgame.’”

It’s a certainly buoying and notable event during what is Toronto’s (and Canada’s) first ever Pride month—an expansion from previous years to more than thirty days of programming, “designed to unite and empower people with diverse sexual orientations, gender identities and gender expressions.”

This year’s roster of Pride events includes the return of the internationally popular parade, the Trans March and the Dyke March, myriad talks, panels and conversations, and a first ever Family Pride Day at Centre Island. High profile personalities like George Takei, Margaret Atwood, and Rufus Wainwright are involved. Institutions like the Toronto Symphony Orchestra, the Royal Ontario Museum, the Art Gallery of Ontario, Luminato, Second City, and even Canada’s Wonderland are hosting events. All in, Pride Toronto boasts a robust, diverse, and unprecedented offering that, at least on paper, seems to have a little something for everyone.

But with all the many festivities, and in light of Clark’s celebrated first pitch, I find myself asking the same question I do almost every year. Where is the Toronto Blue Jays Pride Day at the ballpark?

While many teams in the MLB have instituted annual LGBT nights and afternoons as part of their regular season schedule (the Cubs are believed to have had the first in 2001, and the Nationals have been playing host since 2003,) overall, the Jays have had a bit of an inconsistent relationship with Pride. If you look into the franchise’s history, you’ll see there were some initial “Play With Pride” days at the Rogers Centre about a decade ago, the team promoting discounted tickets to the “LGBT community and friends,” and donating a portion of sales to support gay athletes in the city. Since then Pride representatives have been invited to throw out the first pitch a handful of times, Ace has taken the field dressed in the rainbow flag, and the team has developed ongoing public relationships with organizations like Athlete Ally and You Can Play.

But while the Mets, the Red Sox, and the A’s join an increasing list of teams committed to the LGBT community via annual event days, it’s hard not to wonder why Toronto—which boasts the biggest Pride celebration in North America—hasn’t followed suit. Though the Jays have certainly made efforts and gestures in the past, it just doesn’t appear to be a present community or marketing outreach priority for the club. All of this seems a bit odd contextually, especially when you note that the MLB at large is making notable (and widely publicized) strides. In 2014 former outfielder Billy Bean was anointed the MLB’s first-ever Ambassador of Inclusion, and earlier this year the league announced a major partnership with National Gay & Lesbian Chamber of Commerce.

I’m certainly not suggesting a conspiracy, but instead am encouraging the Blue Jays to add an official Pride Day to their annual schedule, take advantage of an opportunity, and answer an obvious, widespread demand. When I spoke with Pride Toronto yesterday about the ongoing public hope for an official ballpark event, they were certainly positive about their current relationship with the team, and enthusiastic about an expansion of said relationship in the future. They further offered the suggestion that a Jays representative make an appearance at the annual parade, just like reps from other sports have done in the past. From where they sit, MLB, and the team, is making important moves forward, and the future looks bright.

So what exactly should the Jays be aiming for when it comes to a Pride celebration at the ballpark? Late last year I emailed with Eireann Dolan, sports media personality and partner to Oakland A’s pitcher Sean Doolittle, to get a sense of a successful team initiative. In 2015, the pair famously made a public offer to purchase tickets from season ticket holders who expressed “discomfort” over the team’s announcement of its first ever Pride Night, with plans to donate said tickets to Our Space, a Bay Area program for LGBT youth. When no homophobic fans took her up on the offer, Dolan raised money for the same purpose, with a commitment from Doolittle and her to match up to $3,000. I asked her how the Oakland A’s reacted to highly popular initiative.

“The team’s response was overwhelmingly supportive. From the top down,” she told me. “People in the front office sought Sean out in the team weight room or in the clubhouse to talk to him about it and to ask how they could help. Sean’s teammates were definitely on board, and several of them (along with former teammates and players from other teams) actually donated to the fundraiser. Manager Bob Melvin went on record and spoke about it at length, as did Stephen Vogt and Dan Otero. I had hundreds of fans approaching me at games throughout the season telling me that they donated to the fundraiser. The marketing department also did everything they could to help the fundraising gain traction.”

After corresponding with Dolan, I learned that the A’s (who are giving away a fetching rainbow headband at their Pride night this year) very much represent the green and gold standard to which teams like the Toronto Blue Jays should aspire. While noting that other ballparks do host events but fail to make them robust, lacking in obvious signifiers and giveaways, Oakland went all in. “They had constant photos of the celebration on the video board,” Dolan told me. “They made rainbow coloured team logos… They had a huge pre-game ceremony on the field which Sean and I got to participate in, with Billy Bean and all the representatives from the charities that would collect proceeds from the night.” She also added that the event marked the first time an openly trans person—opera singer Breanna Sinclair—performed a national anthem at a professional sporting event. (A talent who, incidentally, will be appearing as part of Pride Toronto’s Village Medley lineup on July 2.)

Sportswriter Jamie Neal was there last year in Oakland, and her personal experience affirms exactly why ballpark Pride events are so important. “They show that people in the LGBT community have a place at the table. That the MLB cares enough to share a day with us specifically means a lot,” she told me. “When the A’s had theirs last year, it was the first time I had attended a game as Jamie in my life. That day gave me the confidence to start moving forward with living as myself full time. And as I sit here almost a year later to the day, after making the decision and following through with living as Jamie full time, I know that the A’s, MLB, and those individuals I met on June 17, 2015 directly impacted my life in the most positive way possible.”

“For other teams to withhold that same opportunity from people who are struggling with or celebrating their gender identity and sexuality is really doing a massive disservice to their fan base,” she says.

Certainly Rachel Lauren Clark’s appearance on the mound at Rogers Stadium matters, but there’s more that can be done, and we can only hope this will be the start of a more comprehensive relationship between the LGBT community and the Toronto Blue Jays. Pride is not only important when it comes to visibility and inclusion, it’s a hell of a lot of fun for the community and allies alike, and a vital initiative for a league that faces declining viewership and attendance numbers. In fact, when I raised the issue of Toronto’s lack of an official ballpark Pride celebration on Twitter, many were enthusiastic about the idea of instituting one, with one baseball fan smartly noting how neatly this year’s schedule coincides with Toronto Pride’s closing weekend.

On July 2, the day after Canada Day, the Jays face Cleveland for a Saturday afternoon home game, prime for an unofficial celebration for fans to make their own. It’s certainly not the same as a sanctioned and promoted event, but it may be a start in revealing to the Jays powers that be the demand and the need certainly exists.