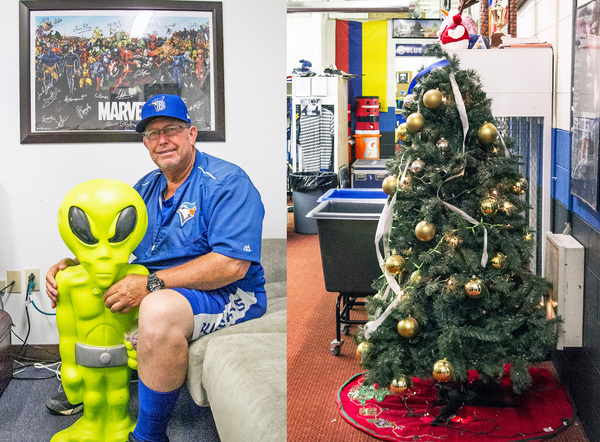 BLUEFIELD, Virginia – The first time I walked into Dennis Holmberg’s office, back in 2007 in Auburn, N.Y., he had a lime-green alien figure by his desk, a Hawaiian shirt hanging on a hook with his uniform and a Christmas tree in his clubhouse.

Here in Bluefield, not much has changed. The same little green creature stands guard in his office. Another Hawaiian shirt on a hook. Another clubhouse Christmas tree, decorated with gold bulbs and blinking lights.

And on the clubhouse walls, hanging large above the lockers, a flag for each nationality represented on the Bluefield Blue Jays’ roster. Well, almost every nationality.

“We had a meeting and I asked them how many players were unrepresented,” Holmberg says. “Three hands went up – Honduras, Nicaragua and Greece.”

“Andrew Florides said Greece. I guess that’s his background. So now I’ve got to get three more flags,” Holmberg says.

Florides was pushing it. The shortstop was born in Glen Cove, N.Y. But Holmberg, the manager of the Bluefield Blue Jays, goes out of his way to make his kids feel at home, so if Florides wants to honour his heritage, he gets a flag. (If others follow Florides’s lead, Holmberg may need to impose generational limits on his policy. Wall space is not infinite.) 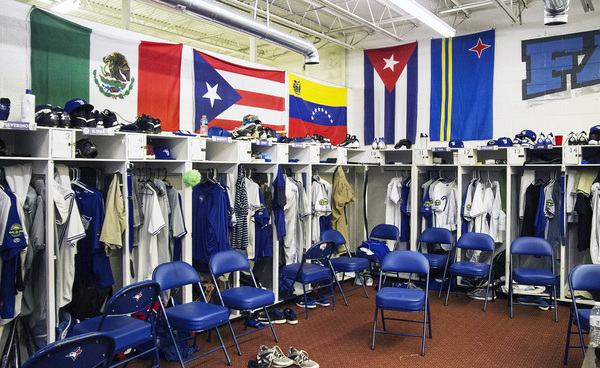 Holmberg’s players – including 17-year-old prospect Vladimir Guerrero Jr. – are among the least experienced in the Toronto system and the least accustomed to the daily grind of pro ball. They also quickly discover they are not nearly as polished as they once thought, back in their star-studded amateur days.

All of that is old hat to Holmberg, but it is not old. This is his 38th consecutive season as a manager or coach in the Blue Jays’ system, mostly in the short-season, small-town venues like Auburn (no longer a Toronto farm club) and Bluefield (added to the system in 2011). He is content there, for he is a teacher at heart.

He keeps things loose, in a homespun and sometimes quirky sort of way.

The little green man came with him from Auburn. A fan gave it to him after he heard about his interest in extraterrestrials. The Hawaiian shirts comprise about 90 percent of his wardrobe, he says. The Christmas tree, another tradition he started in Auburn, is designed to add some cheer to the clubhouse and nurture a spirit of giving. By the end of the season, each player is required to buy a gift – pitchers buy for girls, position players for boys – and place it under the tree. The gifts are distributed to needy local children at Christmas.

“I tell them, you’ve got to give back in this game,” Holmberg says. “If we can give back one small gift to an underprivileged kid, it might make his day come Christmas time.”

Occasionally, Holmberg, 64, dates himself when he addresses his troops, who range from 17 to 24.

While pitching batting practice the other day, Holmberg stopped and called to the batter, “Have you ever heard of Rare Earth?”

Rare Earth released Get Ready in 1969. That would be about the time the batter’s parents were born.

The official address of the Bluefield Blue Jays is a post office box in West Virginia. But Bowen Field, where the team plays, lies in Virginia. The state line crosses the stadium parking lot. A newcomer to Bluefield can quickly become confused, because the towns on either side of the state line bear the same name, and if you make enough turns in your explorations, you will keep seeing signs welcoming you to both states and have no clue which state you’re in at any given moment.

The history of the Bluefield professional baseball team has its deepest roots in the Baltimore Orioles’ system. For 53 years, Bluefield was an Orioles affiliate. Cal Ripken Jr., Eddie Murray and Don Baylor played there. A catcher named Gregg Zaun was 19 when he turned pro in Bluefield in 1990.

Then, after the 2010 season, Baltimore dropped one farm team just as the Blue Jays decided to add one. Bowen Field suddenly had a Canadian tenant.

Opened in 1939 – with an all-dirt outfield and infield – Bowen Field was rebuilt after a 1973 fire. It is showing its age, but has a certain antiquated charm, with its roof-covered red seats behind home plate and green-painted concrete-block backstop. 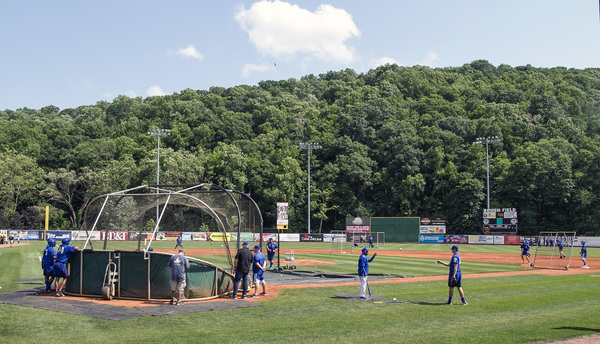 In the Blue Jays’ five-year tenure, Holmberg and his coaches have groomed Kevin Pillar, Aaron Sanchez, Roberto Osuna, and Dalton Pompey for the big leagues. (And Noah Syndergaard too.)

The Bluefield area once held some of the most productive coal fields in the world. It became a railroad hub to haul the fuel across the country. The railroad yard remains. The local coal boom is long past.

Today, the city’s population is just under 11,000, down from 25,000 in 1950. Its economy has declined as well. Bluefield is an old, quiet city of many steep hills and many fatigued buildings. In short, it is the sort of place familiar to Dennis Holmberg, who has spent many a summer in such towns breaking in raw recruits who come to him with high hopes.

“This is like the big leagues to them,” Holmberg said. “It’s not a big city but they’re here for one reason, to play baseball. It’s a beautiful setting, nice ball park, lights are good, travel’s good, gives them a chance to pack and unpack bags, check into hotels. And it’s a whole different environment in terms of competition. I think they start to see, wow, there’s a whole lot of good players out here.”

After eight seasons as a minor-league infielder, Holmberg started his managing career at 25 in the Milwaukee system, where he had played. Then he moved to the Blue Jays for good, starting a career that included six minor-league stops and two years (1994-95) as Toronto’s bullpen coach.

What keeps him coming back for more, especially at this level? 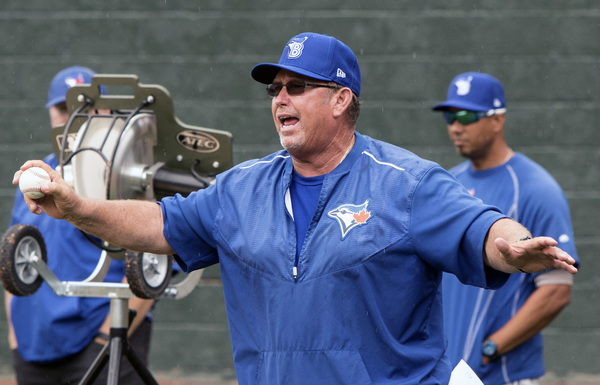 “Very simple: love for the game, passion for the game,” he says. “At this level, although it might sound repetitive, it is teaching the same thing year after year for the new players that are coming in, to hopefully help them to better understand the game itself, not only on the field but off the field.

“There’s so much more that goes into being a professional athlete than just playing the game. You have to understand what you can do and can’t do off the field in terms of checking into hotels, how to dress, how to be respectful.”

He pulls out a sheaf of laminated papers. They’re the lesson plans he had just used during a 30-minute lecture to his position players gathered around him on the infield on the day before his team opened its season. Every so often he paused so that Sandy Alomar Sr., a senior advisor in the Jays’ front office, could translate for the 11 Latin players. The lesson plans represent the accumulated wisdom of nearly four decades of coaching.

“I just try to give them little tips, little pointers,” Holmberg said. “Like today out there, I tried to share some collective thoughts that I’ve gathered over the years from players before them that have made mistakes. I try to persuade them not to make those mistakes. They’re not going to remember everything I say, but hopefully they’re going to be better players and better people afterwards.”

That Alomar Sr. is in Bluefield for the team’s opening series reflects Toronto’s determination to get these players off to a good start. The father of former big-league stars Roberto and Sandy Jr. is a nimble 72. He coaches non-stop during his stay in Bluefield, keeping a sharp eye on everything and everyone as he hits ground balls to the infielders during batting practice. At one point, he stops and calls a player aside, grabs his bat and demonstrates proper bunting technique. During the team’s first game, he huddles with an infielder in the dugout for a lecture about proper footwork. 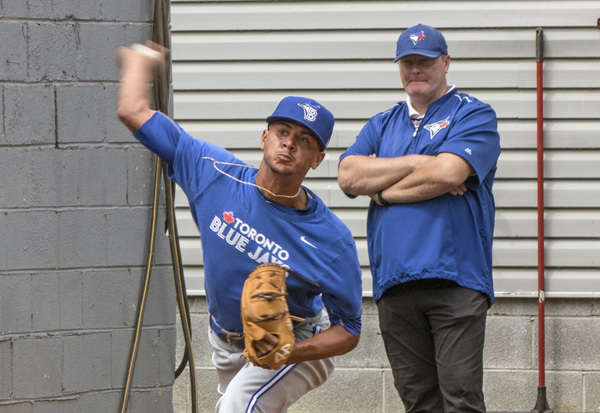 Also on hand is Eric Wedge, hired by new president Mark Shapiro as a player development adviser. Wedge, who managed for Shapiro in Cleveland, has been on a non-stop tour of the Blue Jays’ affiliates, evaluating prospects and their instructors.

Wedge is a former catcher. On the day before Bluefield’s first season, he assembles the team’s three catchers and gives them a pep talk, reminding them how valuable a good catcher can be to his manager, pitcher and teammates.

Of Holmberg, Wedge says: “On and off the field, you can see the passion pouring out of him.”

A baseball historian back in Auburn keeps track of the number of players Holmberg has coached or managed on their way to the big leagues. The number is somewhere around 270, Holmberg says. The walls of his office and the adjacent stairwell are decorated with framed photos of some of them. 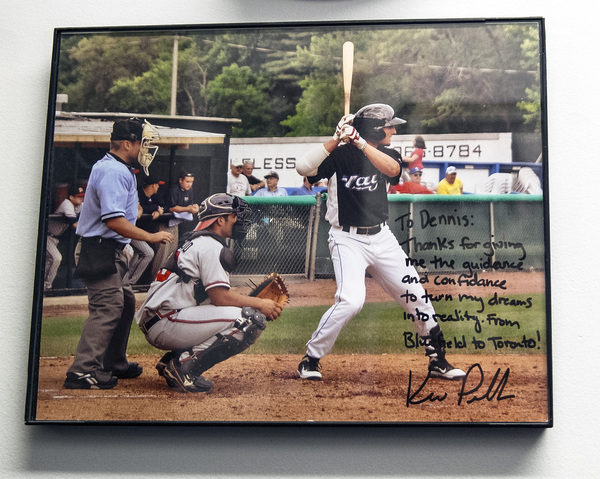 The bond extends to his players who have not reached the majors, and the majority who never will. His 2014 Bluefield team is honoured with a framed print depicting a slew of superheroes and festooned with player autographs.

“We sure had a lot of fun with that team,” he said. “That was a good prospect team.”

The nicknames he gave his players heightened the fun. Rowdy Tellez was the Incredible Hulk. Richard Urena was The Flash. Danny Jansen was Ironman. Josh Almonte was Spiderman. The list goes on.

Holmberg bought the print. The players signed it. His walls are covered in memories. But he remains very much in the present.

Young players, like young people in general, have changed over the years, he says.

“I think kids today expect a lot more and don’t think that they have to work as hard to achieve what they need to achieve,” he says in a matter-of-fact tone, without a hint of complaint.

“I’ve always thought of myself as a very patient guy,” he continues, “but over the years I think I’ve added a third level of patience, maybe a fourth. Those kids that I managed in (Auburn) and now the kids that go to Vancouver, they’re a little more advanced. Here, it’s a different animal. Even though we’ve been through extended spring training and gone through all the fundamentals, the competition’s going to be different when the lights go on.

“They’re all coming from a small pond where they’re the big fish. Now it’s a big pond, with a lot of big fish. Now they’ll be able to measure themselves against the competition.” 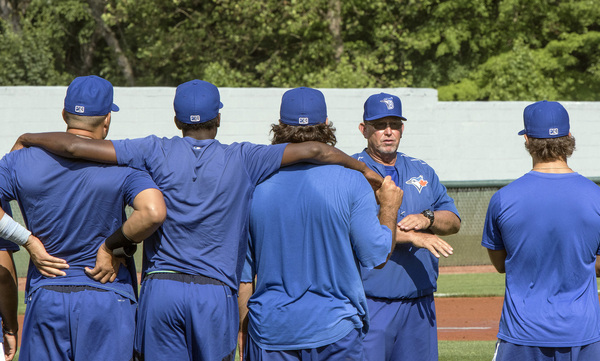 He acknowledges that the job becomes a tad repetitive at times, but each year brings new players and unique challenges. Each year he constantly reminds them that the right attitude is as important as tools and desire. He urges them to make their teammates better as well as themselves. He tells them to become coaches on the field.

For the Bluefield Blue Jays, the ultimate reward remains a fantasy. For most of them, it will stay that way. For some, like Vladimir Guerrero Jr., who hit two homers in his first four games, it is more likely to become reality.

Meanwhile, Holmberg follows his eccentric imagination to add fun to their workplace with comic-book nicknames, national flags and a Christmas tree. And let’s not forget the strobe light in the clubhouse.

He turned it on to wrap up a team meeting on the day before the season opener. Sitting outside in the dugout, I could hear a ruckus behind the concrete walls.

“You might have heard them cheering in there,” he says. “The strobe light goes on when we win. When we lose, it doesn’t go on.”