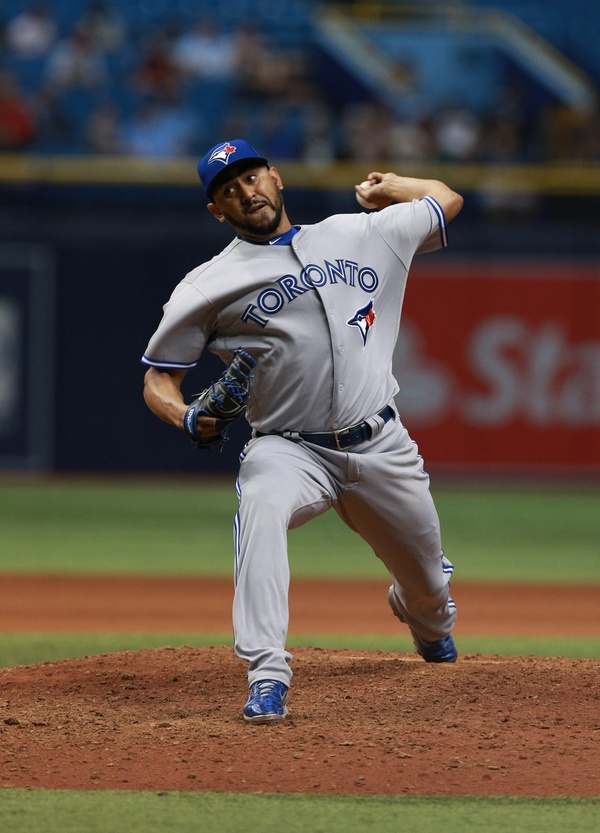 Brett Cecil rejoined the Blue Jays on Thursday, buoyant and convinced he had revived his trademark curveball during his time away. He also delivered an effusive scouting report on another left-hander whose injury rehab recently marched in lock-step with his own.

You’re forgiven if, as a Jays fan, you’ve forgotten about Franklin Morales, or if you didn’t even know he was a club employee, and on a $2-million contract, no less.

Morales, 30, is a veteran reliever with history of success against left-handed batters. He is currently on a rehab assignment with Triple-A Buffalo. Cecil, who just left Buffalo, says Morales could help the Blue Jays right now.

“He’s good,” Cecil said. “He’s got a great curveball. It’s pretty sharp but it’s so much slower. He’s throwing an 88-89 fastball, a cutter I think (at) 83-85 and that curveball is like 72. He was getting quick outs, balls on the ground, punching guys out. He was looking good.”

Shortly before Cecil’s acclamation, John Gibbons was asked whether Morales would soon join Cecil to shore up the Jays’ oft-combustible bullpen. The manager said a callup is “not imminent.”

Morales has had a lot of time. It might seem odd that he would need more, but for the time being, he will get it in Buffalo. The reason is simple: management is not nearly as bullish on Morales as Cecil is.

General manager Ross Atkins says Morales is “making progress” in his rehab but at least three other left-handers at Buffalo – Aaron Loup, Chad Girodo and Pat Venditte – are better options at the moment.

To earn a call-up, Morales “needs to be better than those guys,” Atkins told me.

The Morales saga was fraught from the start, and the intrigue continues.

Released by Milwaukee at the end of spring training, Morales signed with the Jays on April 2, the day before the season opened. He appeared in two games, throwing a total of seven pitches to a total of two batters, both of whom he retired. Then, warming up on April 8, he complained of shoulder tightness and landed on the disabled list a day later with what the club called arm fatigue.

An industry source told me last month that Morales showed no signs of fatigue in spring training, which figures, since he pitched only four innings in four exhibition games for the Brewers.

Coincidentally, during his time on the disabled list, his $2-million contract became guaranteed. It didn’t begin that way. Morales, a  Scott Boras client, reluctantly agreed to a deal that only became guaranteed if he stayed on the big-league roster for 45 days. That meant that if he didn’t measure up within that period, the Jays could release him without further responsibility to pay him.

Morales spent most of those 45 days, and all of the days since, on the DL. A player cannot be released when he’s on the DL.

So it has taken Morales almost three months to rejuvenate a tired arm. That seems a long time, but it may not be unreasonable, given that the condition comes with no precise recovery time.

But he is in fact pitching again. And with the Jays on the hook for the full $2-million, and the bullpen fragile, pragmatism might suggest that management would be eager to find out if they can derive a return on their investment. But when I spoke to Atkins, it became clear that the club’s scouting report on Morales is less sanguine than Cecil’s.

“Franklin is progressing, not at the level we had hoped, but he still is making progress,” Atkins said. “We’re encouraged and certainly remain confident because of what he’s done in the past. He’s pitching in games. His velocity is climbing at a steady rate and gives us confidence that at some point he can help this major-league team.”

If Morales is hitting 88 consistently, and his velocity is increasing at a steady rate, one wonders where it started when he began his rehab in Dunedin on June 21, the same day Cecil started his. One also might wonder whether he can approach his career average of 92.9 or even the 91.7 he averaged on those few fastballs he threw for the Jays in April.

I asked Atkins whether velocity is the biggest issue for Morales. The GM’s answer suggested Morales simply isn’t good enough to help the Jays at the moment.

“It’s a combination and balance of overall stuff and effectiveness and how he’s getting prepared, how he’s warming up for the game, how he’s recovering,” Atkins said. “All of those things will factor in.”

Pitchers have a maximum 30 days for an injury rehab stint in the minors. That means Morales must come off the DL on or before July 22. And that he must be better than three other Buffalo lefties to earn a shot in Toronto.

If he’s not, the Jays may have to pay him $2-million not to pitch for them.

Meanwhile, the bullpen merry-go-round continues. Cecil is back, ending Ryan Tepera’s fourth call-up after three days. With Gavin Floyd on extended leave with a shoulder injury, Gibbons said Bo Schultz would be called upon to work multiple innings on occasion.

Schultz has appeared in two games since his recent call-up. His fastball sits in the mid- to high 90s, which Gibbons called a vital asset in situations when the Jays need a strikeout – “when contact’s your enemy,” which it has often been for Toronto relievers this season.

Schultz found himself in one of those situations Thursday night in the ninth inning with a runner on second. He threw a 90-mile-an-hour cutter, which Tyler Naquin whacked for a triple, driving in the final run in Cleveland’s 4-1 win.

Cecil said he used his rehab time to adjust his pitching mechanics. He admitted he had been desperate early on to rediscover the curveball, his money pitch, and began overthrowing as a result, creating flaws in his delivery.

Could that have a contributed to the triceps strain that put him on the shelf with an 0-5 record and 5.23 ERA?

“You never know,” he said. “It’s certainly not good to overthrow, overthrow, overthrow. I’ve made some changes, trying to stay more upright and not arch my back so much. That way it keeps me over the rubber and keeps my arm from not going away from my body so much.”

A reporter asked him to assess the bullpen’s performance this season.

“Not very good,” he said. “I mean, how would you guys describe it? Including myself, I’m not pointing anybody out … Overall, I would probably have to rate us about a D, D-plus.”

The goal, he said, is for the relievers to raise that grade to the B range quickly and to earn a collective A by September.

He earned an A on his return Thursday night, pitching a perfect eighth inning (ground-out, strikeout on a curveball and a pop-up).

“I’m not saying me being back is going to kick-start things and turn things around,” Cecil said. “I’m sure as hell going to try.”

Beyond the Boxscore: Johnny Gaudreau comes up clutch as the Calgary Flames advance to Round 2

Monday Mailbag: Draft targets if the Canucks trade down, Rathbone on PP2, and #MustardSzN

Hellberg, Suter off to strong starts at the 2022 IIHF World Championship

Gamethread Playoffs Game 6 – way to early to do or die