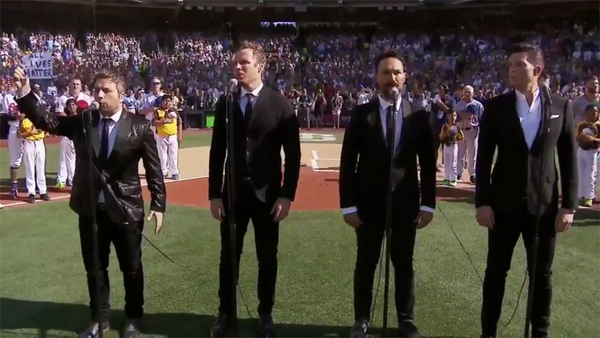 What morons. What absolute utter fucking morons. Let’s get that out of the way first.

Or what a moron, if you believe the official statement. Because holy shit. On Tuesday night, at Major League Baseball’s All-Star Game in San Diego, while performing O Canada in front of a Petco Park crowd of over 40,000 and a massive international TV audience, a quartet of tenors from British Columbia, named simply The Tenors, changed the “With glowing hearts…” line into a message of support for “All Lives Matter.”

Or, as the group would like to breathlessly insist, “lone wolf” member Remigio Pereira — who was soloing the aforementioned line — did it without any of their knowledge.

However it happened (and I tend, at this point, to believe the band), it happened. And it turned literally one of the most pointless exercises in all of professional sports, the playing of national anthems, into something we have no choice but to talk about:

I know it’s just a song before a sporting event, but I have so many emotions about this, as I’m sure many of us do. But first, let’s just quickly make sure we’re on the same page about stuff here. As offensive and dumb as it is that Pereira would think it’s OK to take it upon himself to change the words to O Canada, I’ll admit that I probably wouldn’t be quite as bothered if he changed it to something like “kittens are adorbz, cotton candy for all.” I’m pretty sure people have changed the odd word and not met with the same kind of ire from me, or from a whole staggering lot of the internet. Some people aren’t even bothered with this, it turns out! Michael Saunders, for example.

But insomuch as an anthems matter, the fact that he inserted a political message matters here. As does the fact that, as a message, it’s utter horseshit.

“All Lives Matter” seems on the surface to be a pretty innocuous thing to say, but of course it’s not. It’s used as a way to repudiate and to silence and to hijack the conversation from the “Black Lives Matter” movement, and is based on the phony assumption that anybody in it means to say that *only* black lives matter. The fact that “All Lives Matter” might actually seem so benign — and that I’m sure some people genuinely don’t know what they’re doing when they use it — makes it all the more insidious. And the “Black Lives Matter” movement is important because no community should ever feel threatened by the police, or be unjustly harmed or killed by them, or be forced to endure systemic unfairness of any kind, and when people genuinely say things are wrong with their lives and their condition we should listen and try to help, not rush to be dismissive. So people saying “All Lives Matter” ought to be called out.

It’s just not a cool thing to say. And it is especially not — and this is really what’s quite amazing, and somehow even hilarious about this story — to be INSERTED INTO THE NATIONAL ANTHEM. AT THE MLB ALL-STAR GAME. YOU FUCKING WEIRDO!

I mean, I’m kinda fucking outraged here! I’m fucking outraged and I haven’t even really hammered home how fucking offensive it is for some clod to take it upon himself to change the words of O Canada to *anything*. Let alone to something legitimately offensive. LET ALONE how purely embarrassing it is that this jizzheel, who was there as a representative of our country, used his soloing a line of our national anthem in a giant American spectacle like the All-Star game to blast his ca.-2016-doofus-bro views out to the world!

I’d be even more outraged, too… if it wasn’t just so goddamned funny.

Watch this clip, look at the faces of his bandmates as Remigio takes out the card with his rewritten lyrics on one side and the message “All Lives Matter” on the other, and try not to laugh. (Try also to not conclude that this pretty much exonerates the other members of The Tenors):

You can actually see the other #tenors slowly like at him like “what the fuck” when he starts his solo.@bruce_arthur pic.twitter.com/awZGTHjyk0

They’re trying to be professional, but I kinda think he might as well have dropped trou and taken a dump right there and then. It’s a pretty amazingly fucked up thing to do if he really did it on his own! And whether he was a “lone wolf” or not, one gets the sense that it mostly happened because Remigio, it turns out, is something of a kook. That’s not to excuse it, or put too much of a goofy face on something that’s either incredibly shitty or profoundly ignorant. But my Twitter timeline is currently telling me that he was making flat earth posts on Facebook, and other truther/conspiracy-type stuff, which honestly just makes me sad. And feel bad for his bandmates, especially if they’ve innocently been consumed by the backlash. And just makes him pretty fucking hard to take seriously, frankly.

Because, I mean, I don’t think anybody tonight is approving of this sudden change to O Canada some dickhead inserted of his own accord. Nor do I think anybody is suddenly woke to some “All Lives Matter” bullshit because of fucking Remigio the tenor with the card at the fucking All-Star game. LOL.

In fact, in a way, this moron may have unwittingly done right-thinking people a favour by underlining what a waste of time the national anthems are before sporting events that don’t feature competition between nations. Because if we have to have a conversation about anthems — and apparently right now we do — that’s the one I’d much prefer.

What a world! Now let’s give it a rest with the anthems at sporting events already, eh?