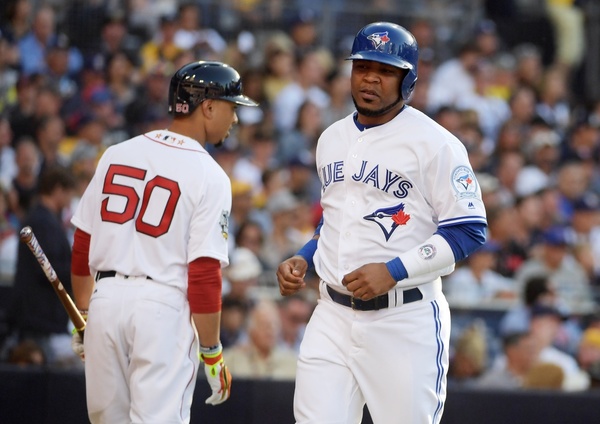 The on-field action at last night’s All-Star Game in San Diego was pretty good! But hoo boy, it was no match for all kinds of shittiness and weirdness that was taking part off the field around it. Three things, in particular, stuck various ways in my maw’s gullet’s craw. And so now let’s unstick the shit out of them, shall we?

Look, I’m pretty sure “tampering” is something specific and, by definition, can’t be engaged in by an employee with no decision-making power unless it’s part of a conspiracy within his organization — which I’m sure the Red Sox wouldn’t be dumb enough to have David Ortiz go and do publicly at a press conference. Speaking after the game last night, the retiring Red Sox slugger talked about the the club needing to revitalize the middle of their lineup once he’s gone, adding, “Who better than Encarnacion?”

For one, he’s not wrong. But also, it’s hardly going to be news to the Blue Jays’ free-agent-to-be, or anybody, that there will be a Papi-sized hole at DH for the Red Sox next season — provided Ortiz, who is in the midst of his best ever season at the plate (he entered the break with a 182 wRC+; his career high is 175, set in 2007), actually goes through with his plans. Saying the Red Sox should go out and get him isn’t tampering. Or even if by someone’s definition it is, who honestly cares? It doesn’t matter an iota.

What gets me about this, though, and what I think gets a lot of Blue Jays fans about it, is the entitlement that seems to come out of Boston on the issue. Like it’s preordained. I don’t know. That’s probably just the angry Jays fan in me talking, but the mentality from a whole lot of fans and a whole lot of their media cheerleaders seems to be, “Of course Encarnacion will want to come to Boston. Why wouldn’t he — why wouldn’t anyone want to come to Boston?”

Because fuck you, that’s why! And don’t you kinda need that spot for Hanley anyway?

I hope he pulls a Stamkos on these clowns. And I hope the Blue Jays give him a damn chance to.

I see Jesse Spector is at it again

Irrepressible goober Jesse Spector may have clarified some things about his Tuesday night piece for the Sporting News via his Twitter account, but I’d have no idea what those are, since Spector blocked me a long time ago for pointing out how utterly useless and unfunny he is. So I guess I’m just going to have to take the thing at face value, meaning I’m going to have to add another descriptor for him to my pile: shitheel.

Spector pounced on Michael Saunders’ comments on the O Canada fiasco under a hopelessly disingenuous headline (which, to be fair, may have been written by somebody else; in print it’s standard that an editor gives the piece a headline, but on the web it’s far more often the author him or herself).

“Jays’ Michael Saunders supports singers ‘All Lives Matter’ message” screams the headline from the once-respectable publication. And while Saunders did tell reporters he liked what he heard and “it’s a great message, obviously,” he also said that he didn’t actually hear what words were said. More to the point, he was being asked — to put it politely — about an issue with nuances that not everybody is aware of. If I were to put it impolitely, I’d say that he was being baited into giving answers that shitheels could then use to get shit-clicks with their shitt “Michael Saunders supports ‘All Lives Matter’ message” headlines.

Spector himself even admits that “it’s not really fair to rip him for saying that ‘all lives matter’ is a ‘great message,’ ” but by then the unfair ripping has already well taken place.

I’ve already said my piece on the O Canada thing, so I don’t really want to go into all that again, but I will say this: as cringeworthy and embarrassing as that message being inserted into our national anthem was, and as offensive as I think it is, we do have to understand that the reason the phrase is problematic isn’t necessarily self-evident, and a lot of people genuinely don’t understand the subtext of what they’re saying. It’s a white supremacist message disguised as something that almost looks beautiful and speaks, on its surface, to the notion that we’re all one. As I said in my earlier piece, that’s what makes it so insidious. But that also means we ought to be understanding of the fact that people may unwittingly think it’s something that it’s not — that people can be saying it’s “a great message, obviously,” but not actually supporting the “All Lives Matter” message.

So maybe don’t be so fucking disingenuous about it in your shit-click piece, y’know? Be an asshole or be wrong, never both.

Jon Morosi of Fox Sports crawled out from under his bridge to appear on some show on the Fan 590 this morning, and was quick to throw cold water on Jays fans’ high hopes for the second half. Specifically, he’s “concerned” about the club’s two best pitchers:

Anytime it’s July and you need four cortisone injections just to get back on the mound, I’m nervous about it. So I’m a little worried about his back and if [Marco Estrada is] going to be able to really sustain his success here in the second half. And then, certainly, Sanchez, with his mythical innings limit — does it exist? Does it not? Do they really want him to be a reliever? Do they want him to be in the rotation. I mean, those two questions, there’s your season. Really, in many ways, if you tell me how many starts both Estrada and Sanchez make in the second half, I’ll be able to tell you if they’re a playoff team or not. Because if they duplicate what they can do — if they do in the second half what they did in the first — I think they you’re potentially, and quite possibly, talking about a Wild Card team for the Jays. And if all of the sudden one of them is not available or injured or ineffective in the second half, I think that you’re going to have some issues keeping pace with teams like the Astros.

Like… hold on just a second here. For one, Estrada has been dealing with a sore back since at least February (when he injured himself with some kind of Bruce Lee move), and has been utterly fantastic all year. Estrada began the season on the DL, and just happened to have been placed on it again to coincide with the All-Star break, meaning that with off-days and the chance to reshuffle the rotation as the second half begins, he’ll miss as few starts as possible.

It’s possible he isn’t the same in the second half, just like it’s possible that just about any pitcher with any kind of red flag might struggle to maintain his success, and that sure would make Morosi look smart, I guess. But to me this simply isn’t the “ominous sign” he wants to portray it as — especially since I don’t think we can even say whether or not these were his first cortisone shots of the year.

The Aaron Sanchez stuff is a bit rich, too.

Sanchez may be sent to the bullpen, it’s true, but that will only be at a point where the Jays are starting to see him wear down — where his effectiveness in the rotation would have been diminished anyway. And where he can still be a huge asset to the club as a late inning reliever — provided they make the switch in time to preserve his arm a bit (at least theoretically), if they even make the switch at all.

And really… this team can’t win a whole bunch of games behind Drew Hutchison? This team has no hope of finding another starter at the trade deadline, in the event that somebody actually does get hurt or suffer a dip in performance over the next three weeks?

Worse yet, this team is already thinking about the Wild Card because presumably we’re to believe they’re not going to find a way past the Baltimore Orioles???!?!?

Oilers Prospect Update: A nice Kesselring to it

JN Recap #60: Jets Beat Blackhawks On A Sunday Yet Again