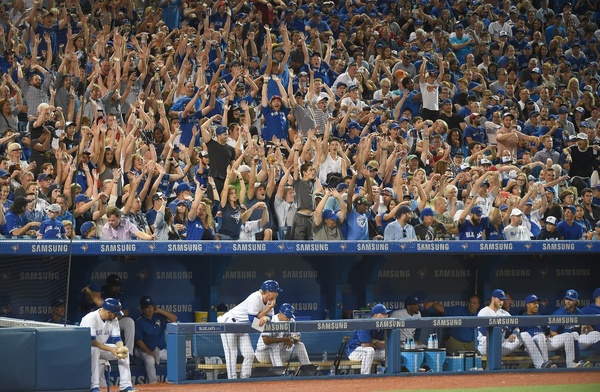 Picture it: Seven innings deep into a tied, tense, back and forth mid-August affair between the pennant-chasing Blue Jays and Tampa Bay Rays, Melvin Upton is at the plate facing a Rays pitcher, Dylan Floro, who just walked Russell Martin to load the bases with no outs. As you edge forward in your set, all the energy of the crowd focussed on battle between pitcher and batter, the pressure ratcheted up with each pitch, each deep breath, as the count runs full. Floro brings his hands set in front of his body then begins his motion as you hear a rumble to your left and sense movement in your peripheral vision. Before you know it Floro explodes towards the plate, releasing the baseball and driving hard as it cuts through the air like a bullet and Upton zeroes in. And it’s precisely in that moment that from out beyond your concentration the sweaty back of the assface in front of you stiffly rises from out of its seat to block your view as your fellow fan raises his arms to the heavens in sync with the rows of cascading morons mindlessly abiding some squid’s call for a ritual that seemed boring and corny as fuck by the time you were eight.

Are you shitting me?

The wave? With the bases loaded in the tie game with only a quarter of the season left and the team needing a big win to feel like some momentum might be shifting their way after a dismal trip to Kansas City and a hardly inspiring series win over Houston before that?

The boring-as-shit nuisance game for babies? The hey-we-don’t-actually-care-about-this-shit-happening-on-the-field signal? The tepid, resigned mass response to some sad human’s desperate plea for attention?

The dumb-as-shit shit that forces *me* into my own ritualized bullshit, writing yet again about how painfully fucking inconsiderate it is to the non-children around you who are trying to watch the baseball game when you’re doing the wave — a post I have to write every goddamn year, apparently, because of how soul-crushingly difficult it seems to be to get people to grasp this concept.

You’re not helping the team. You’re not being a kooky, fun-loving fan getting “into it.” Yeah, it’s great that you’re at the game and that so many people are there too — and on a Monday, no less. So, uh… here’s a radical idea: watch the game! You’re not the game! The sad asshat who won’t stop trying to get people to start the wave is not the game! Putting your arms up into the sight lines of the people around you as a key pitch is being delivered isn’t the game! The game is the game!

Like… fuck. This post should be about how ridiculously great Devon Travis is playing, or a breakout for the Jays’ offence that’s been too long coming, or another perfectly competent outing from the bullpen! And yet here I am talking about the fucking wave. The wave! Because people want to honestly, seriously, dumbly fucking do the fucking wave *just* when shit on the field is actually starting to get serious? The wave????

Fuck the wave! Fuck off with the wave! But *especially* fuck off with the wave if you’re doing it at literally any time resembling an actually interesting moment of the baseball game that you and those around you have paid to attend. Is it a blowout? Is there a pitching change? Do you need to do something to keep your attention away from the discomfiting and vaguely tribal chanting or any of the other of the parts of the pile of shit song they’re trying desperately to make “a thing” like the Red Sox have with Sweet Caroline late in games? Fine!

Knock yourself goddamn senseless with the wave in those situations. Go nuts. I might not join in, but I can’t tell you not to have your little I’m-an-eight-year-old moment of fun. Just don’t be an asshole about it! And newsflash, Thomas fucking Young, when you’re doing it — and especially when you’re starting it — in a crucial part of the ballgame, you’re being an asshole.

Take it away, hero…

Ranking the Leafs prospects prior to the draft