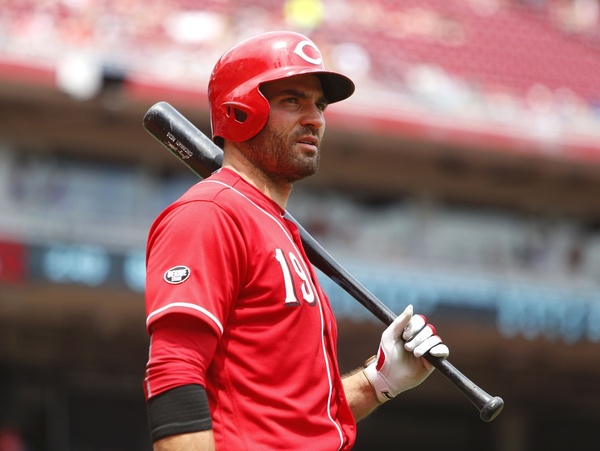 Joey Votto is great. Let’s get that out of the way first.

I mean, obviously. I could dig up all kinds of numbers to prove his bona fides, but the most striking and concise one that I’ve encountered is one GROF threw at me on Wednesday morning: “Votto’s career 156 wRC+ is third best since they lowered the mound. THIRD.”

If you clicked the link or saw it at the time, you’ll know that the first part of Drew’s tweet was “Stoeten is out of his mind.” That’s because he was responding to my mocking of the typical, throbbing, instantly erect, blasting-through-the-underside-of-your-desk maple dick reaction to anything resembling the suggestion that the Toronto Blue Jays should, and *could*, find a way to acquire the Cincinnati Reds’ Etobicoke-born superstar.

Believe it or not, I didn’t put it quite as elegantly as I perhaps could have. I tweeted: “Contract is terrifyin– oh, I’m sorry, he has *what* passport? — sounds swell!”

Is the contract really so bad? I mean, no, not so much so that you’d turn up your nose at even thinking about taking it on. He has seven years and $179-million still owed to him after this one (including the $7-million buyout on his $20-million option for 2024), and will turn 33 years old next month. He has had trouble staying on the field in a couple of seasons, but has mostly been healthy — including last year and this — and is always ridiculously productive.

And honestly, of any of the seasons in which the idea trading for Votto has arisen — i.e. literally all of them since Votto has been in the league — this is the one where actually talking about it might rise slightly above the level of a pipe dream! But only slightly.

And yet here we are talking about it! Why? For the same damn reason that we do every single fucking season: because of Votto’s passport.

Sure, he’s an elite, expensive player at a position of need for the Blue Jays and playing for a bad, rebuilding team. Guys in those situations don’t necessarily come around every year, but they certainly do come around. We just don’t talk nearly as much about them.

Remember how the Troy Tulowitzki trade came completely out of nowhere? That’s because Jays fans weren’t working themselves into a lather over Tulo every single fucking year for the last half-decade, despite his being an upgrade with a big contract on a bad team.

Ahhh, but what’s that you say? That most of that was because of his health or the fact that the Jays had a decent enough player, Jose Reyes, at his position for many of those years? Newsflash: the Jays had Edwin Encarnacion and Adam Lind for a whole bunch of Votto-dreaming years, but that didn’t seem to be an obstacle! And when Votto struggled to stay healthy? Why, that was a reason the Jays could swoop in and get him for pennies on the dollar!

I’m not saying they’re entirely apples to apples, so save your “well actually,” but face it: Votto’s name constantly comes up in this market, year after fucking year, because he’s the Canadian guy. There’s an attachment there — and that’s fine; I can assure you that Dennis Bergkamp wouldn’t be my favourite soccer-ball player if he was a fucking Belgian! — but what it means is that fans delight in scheming for ways to get Votto on their favourite team.

It also means that a media person searching for ways to fill airtime whispers *Votto* and off we go.

But what it doesn’t mean is that the Jays landing Votto is in any way realistic, or the best use of their resources, or something they can just snap their fingers and do as though the world owes us this player because of some accident of his birth — and as though he actually wants to play in his own back yard, which, though I’m not actually going to look it up, I’m pretty sure I’ve heard he maybe doesn’t (or at least was wary of in the past). (He has said that he doesn’t want to waive his no-trade clause at all, though that was in front of an audience of Reds fans, so maybe isn’t what he thinks privately.)

I get that nobody’s quite saying anything like that, it’s just… it’s a frustratingly enduring pipe dream.

But sure! Votto here would be great, hypothetically. There are so many years left on that contract in which it could still take an ugly turn, and his salary is so high that it would preclude the club from doing a lot of other things, it would mean the Jays continuing to be a team full of expensive guys on the wrong side of 30, but it would also mean Joey Votto! I get the appeal.

Of course, were this a thing that was actually happening (and as far as I can tell it certainly isn’t), I don’t think the Reds would be just giving him away for salary relief, like so many pipe dreamers also want to believe. You’d have to give something up to get him, too. You might even have to compete with other teams trying to acquire him — maybe a team with a whole lot more prospect capital than the Jays have, a bigger budget, and an impending vacancy at DH. *COUGH*

That sure complicates things! And while that would be more of a move for the off-season, I’m sure we’ll still be pipe dreaming on Votto at that point, too!

It’s just, I guess what I’m saying is: how about we don’t.