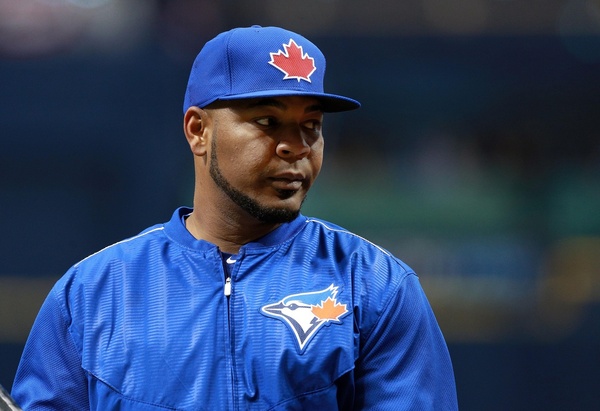 We are eons away from finding the truth, if indeed it ever emerges, about the stunning STD allegations that erupted Monday against Blue Jays’ slugger Edwin Encarnacion.

Blue Jays general manager Ross Atkins indicated to me late Monday night that the club, at the moment, is straddling a precarious fence.

“We’re not going to comment on this until we can gather more information,” Atkins said in a text message. “We will do everything we can to support Edwin throughout.”

Quoting from a lawsuit, the website TMZ reported that Encarnacion knew he had “multiple” sexually transmitted diseases when he infected a 24-year-old woman during at least two sexual encounters earlier this year in the Dominican Republic.

The allegations are outlined in an $11.5-million lawsuit the woman has filed, TMZ says. TMZ’s report does not name the woman or specify the jurisdiction in which the lawsuit was filed.

I asked a Major League Baseball source whether MLB is investigating the allegations, whether its officials have talked to Encarnacion and whether the allegations would fall under MLB’s domestic violence policy, which has disciplined high-profile players Jose Reyes and Aroldis Chapman this year.

The reply: MLB has no statement at this time.

My interpretation, for what it’s worth: MLB is taking a very close look at the allegations, but isn’t sure at the moment whether knowingly transmitting STDs would fall under its new policy, which covers domestic violence, sexual assault and child abuse.

TMZ’s report comes in the heat of a pennant race in which the offensively challenged Blue Jays are desperately battling for the upper hand. At the moment, Encarnacion is Toronto’s biggest threat, the man opposing pitchers fear most. He has hit 35 homers and leads the league with 101 RBIs. He is scary powerful.

The case is multi-layered, both in terms of legal redress and the issues it presents to Major League Baseball.

Legally, it’s the sort of case that can take years to go to trial and more often is settled out of court, under terms that are cloaked in secrecy, with the accused person acknowledging no responsibility. The accuser gets money and the case goes away.

Which is not to say the allegations against Encarnacion are factual. In an interview in the Dominican Republic, Encarnacion’s lawyer, Guillermo Estrella, reportedly said the lawsuit has no foundation: “It seeks to damage the image of Edwin Encarnacion.”

And in a story by Sportsnet’s Shi Davidi, Encarnacion’s agent Paul Kinzer calls the allegations “meritless” and “frivolous.” Kinzer told Davidi that Encarnacion will file counter-suits “against all of the individuals seeking to exploit his financial position.” The Kinzer statement did not specify how many individuals could be subject to clounter-suits.

Kinzer told Davidi that Encarnacion is a man of “exceptional character and stellar reputation within the baseball community … who carries himself with the highest level of integrity.”

For MLB, the case is complicated.

Reyes assaulted his wife and, although she refused to testify and the criminal case was dropped, he was suspended and lost more than $6.2-million in salary.

Chapman’s case also did not made it to the courts, but he “accepted” a 30-game suspension for allegedly choking his girlfriend and later firing eight shots from a handgun inside a garage on a property they shared.

The Reyes and Chapman cases were the first to test MLB’s policy. The allegations against Encarnacion do not fall so neatly under the new protocol. The lawsuit, according to TMZ, is civil, not criminal, and accuses Encarnacion of battery – essentially, that he knew he had one or more STDs, told her he was clean and deliberately risked infecting her when they had consensual sex.

If MLB finds evidence to prove that allegation – irrespective of the lawsuit outcome – does that represent domestic violence or sexual assault? MLB officials are undoubtedly pondering how the answer to that question applies to their definitions of those terms.

TMZ’s report does not name the woman involved. It says she is a friend of the Encarnacion family. Presumably, her name is on the lawsuit and MLB will try to talk to her – which, of course, complicates her decision to seek legal redress through a lawsuit because MLB’s probe would add another invasive layer to the process she decided to launch.

In such cases, the victim is often at a decided financial disadvantage. Encarnacion is making $10-million this year and, as a pending free agent, will make much more next year.

So on the face of it, the woman is seeking an amount roughly equivalent to Encarnacion’s 2016 salary as compensation for contracting two STDs from having unprotected sex with him.

These cases make for quick-fix conclusions, depending on one’s point of view.

For the Toronto media, Encarnacion is a popular, personable sort, and of course, a star.

His limited proficiency in English creates a small challenge when it comes to asking questions and a tendency to take it easy when probing for answers. He is typically accommodating when a reporter comes calling. In his eight years as a Blue Jay, he has always seemed like a good guy.

And perhaps he is. No one, however, falls neatly into this or that category. We are all nuanced.

And today, many Blue Jays fans have reason to wonder: Why would a woman make this stuff up, and subject herself to the agony such a lawsuit would surely create?

The story’s shelf-life will probably be short, in the short term. Blue Jays management and MLB will continue to “gather information.” If Encarnacion keeps hitting home runs, Blue Jays fans will be happy.

And by the time a quiet out-of-court settlement is reached, Edwin Encarnacion may be hitting home runs for someone else and we will probably never know the truth.

Which affords no justice to anyone.