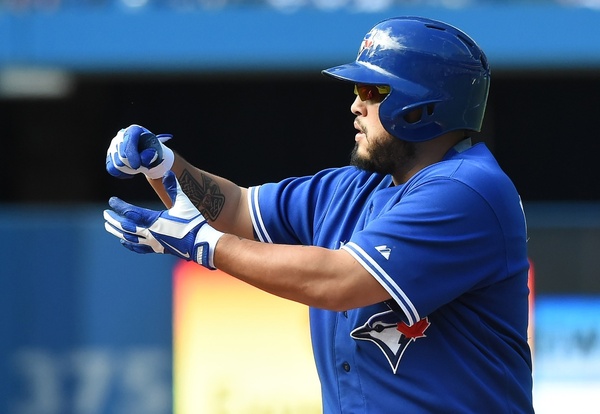 Ten years ago, I fell in love with a person who doesn’t really like baseball.

Of all the possible problematic relationship dynamics, I know that this one doesn’t even crack the top one hundred. In terms of compatibility, I’m certainly one of the lucky ones. Having said all that, this specific imbalance of personal interests has created the occasional conflict in our day-to-day lives. In the marriage of two workaholics, down time is a very precious thing, and because I wanted baseball to monopolize pretty much all of it—whether from the couch or at the stadium—we’ve had to negotiate our fair share of relaxing moments.

Summer Saturday lunch locales usually have to come equipped with a television turned to a sports channel, and I’ve been (rightfully) chided for checking the score on my phone during less than optimal family moments. I’m also guilty of trying to sneak a ballpark visit into pretty much all of our much-needed vacations. That glorious two-week road trip through California? It had a lot more to do with the Dodgers and the Giants than the Pacific Coast Highway and a tour through wine country. That weekend visit to DC? Sure the National Archives and the National Gallery of Art were lovely, but if I’m completely honest Max Scherzer and Bryce Harper were the real draw. I’ve tried to sneakily hunt down a baseball game to attend in Cuba during a short resort vacation in the dead of a Canadian winter, and even attempted to eek out some University ball when we were in Las Vegas to get married. (I finally conceded to the sheer ridiculousness of that last one. I’m not a monster.)

That’s why when, in 2014, my husband told me that he thought he’d discovered his favourite player, I was more than a little elated. Anyone who has fallen head over heels in love with this game knows that the favourite player is the first step in developing a genuine all-encompassing obsession. I still remember the burgeoning baseball feelings that Devon White and Kelly Gruber gave me when I was in my early teens. Hell, Josh Donaldson is probably solely responsible for a not insignificant percentage of the current Toronto fan base. For whatever inexplicable reason, you fall in baseball love with a single man in cleats, and through him the whole game opens up for you. You buy his jersey. You manically check his stats and defend him at every turn. Like Pavlov’s dogs you feel a thrill every time his walk up music plays.

But my husband didn’t decide to go with an expected, common Blue Jays pick. He wasn’t into Edwin, or Jose, or that easy to love Canuck named Russell. He didn’t prioritize the fun, youthful energy of Marcus Stroman, or the intellectual, benevolent vibe of R.A. Dickey. No, he wanted to cheer the loudest for the lesser-celebrated Dioner Navarro. (As a long time die-hard Adam Lind devotee, I was in no position to judge.) In fact, Navarro interested him precisely because he wasn’t a star, because he seemed like a down-to-earth genuine nice guy, and the steadfast, cerebral allure of the catcher appealed to my husband’s personality.

And thus, whenever Navarro came up to bat, my generally reserved partner-in-life would yell and cheer enthusiastically—the more comical chosen missives being “we should be friends!” and “we should hang out!”

I watched as my husband exploded with unbridled joy during this home run and that home run, and in time, I came to realize that maybe, thankfully, I wasn’t the only fan in our house anymore. Dioner Navarro had brought him closer to baseball, and in turn had brought us closer together.
“I honestly can’t explain why I liked him of all of the players when I first was like ‘that’s my guy,’” my husband told me while washing dishes last night.  “I guess he’s like the anti-star. He’s not the athleticism of Josh Donaldson. He doesn’t belt out home runs like Jose Bautista or Edwin Encarnacion. I like him because he’s not the thing the game is known for. He’s just this quiet dude. He’s just a solid catcher who is actually shockingly good in a clutch.” (My husband then questioned whether or not he was using the term “clutch” correctly.)

It’s true that in 2015 Navarro wasn’t exactly a stereotypical baseball hero. Backing up Martin, he played in only fifty-four games, and had only 192 plate appearances. He had five (very fun) home runs, twenty RBIs, and batted .246. But he captured my husband’s imagination regardless, just like his smiling face compelled the gleeful adoration of an entire playoff-intoxicated fan base. It’s actually not all that surprising that Navarro would sneak stealthily into my husband’s otherwise sports-hating heart — this is a ballplayer who wears the number 30 because that was the day in September 2003 that his wife survived a cerebral aneurysm after being given a 5% chance of survival. Also, I’m sure his status as an animal lover who is reported as having two dogs, two birds, a chameleon named Jeffrey, and a pig named Sassy who he “treats like a princess” doesn’t hurt either.

When Navarro signed a one-year deal with the White Sox last December, I worried that my husband’s love affair with the game would go with him. I was concerned that this was the end of the enthusiasm for baseball I had longed for all those years. Instead we made a plan to go visit the catcher in Chicago, a sweltering June game that featured both a miraculous inside the park home run care of Brett Lawrie, and a 10-8 win for the Jays. My husband may have (shock, horror) worn a White Sox cap the whole time, but it was a genuine thrill to see him cheer for his personal fave all over again. Despite his time away, I now have Navarro to thank for the fact that my husband comes home with baseball stories and stats, trade news and game theories, and that we can finally, truly share this thing I love so much.

When the news broke last week that Navarro was returning to the wide-open arms of the Toronto Blue Jays, there were baseball feelings abound. I actually didn’t see one negative reaction to the acquisition, the celebration less about stats and more about how good he makes us feel about the game. On social media, fans posted and reposted that classic photo of him sucking on a cigar in a borrowed cop hat (apparently a photo Navarro now has a blown up framed version of in his home.) But me? When I got that “Um, did we bring Navarro back?” text, all I could think about was how happy seeing him on that line up card again would make the person I love.

And sure, I may have thought about how this will make it a little more fun for us to go to games together—well into October and beyond.

The Flames should be a younger group next season

Jake Muzzin is the hero we don’t deserve