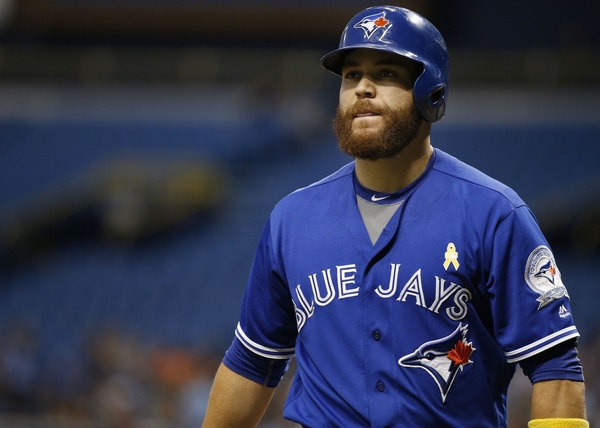 Players-only meetings hold no guarantees that a team will drag itself out of a ditch, but four veteran players say they came away feeling encouraged after Saturday’s 40-minute session in the Blue Jays’ clubhouse.

Naturally, no one was about to spill any secrets about what was discussed. And naturally, everyone was in an upbeat mood after the Jays edged the Red Sox 3-2 less than 24 hours after an ignominious 13-3 defeat dropped Toronto two games behind front-running Boston.

Catcher Russell Martin, however, tossed out a few hints that the team’s recent struggles might have generated some clubhouse grumbling that troubled the team’s veteran leadership.

“I’m more of the school of thought, keep everything positive,” Martin said. “Keep your thoughts positive, control what you can control and just …”

“… stop complaining. Just toughen up a little bit and be resilient. That’s kind of just what our meeting was about.”

Martin also volunteered that the session was meant to remind players that team goals take precedence over their own.

“Just remembering that it’s just about winning, it’s not about individuals,” he said. “It’s about the team. And it was just nice to get everybody together and talk about it and get back on the same page.”

Back on the same page. Without details, which won’t likely emerge, it is unfair to put too much emphasis on the word back. But with that in mind, I asked Martin whether there were concerns that some players had not been singing from the same song sheet.

“Not necessarily,” he said, adding an intriguing qualifier to his reply. “I think it was just to make sure, just to reassure, just to make sure that everybody’s in a good mindset and focusing on what they need to focus (on). Focus on the good stuff. I’m not going to really going to get into details, but it was a good meeting. It was a positive meeting.”

Reliever Jason Grilli, whose magnificent eighth inning was a key to Saturday’s victory, also was preaching the evangel of solidarity after the game.

“I think everybody in here locked arms today, and we trust each other’s ability, and we know that we’re going to stay in the fight right to the end,” Grilli said.

Although it was not immediately clear who called the meeting, Edwin Encarnacion said five veterans – himself, along with Martin, Troy Tulowitzki, Josh Donaldson and Jose Bautista – discussed their concerns after Friday night’s embarrassing loss. Martin said he didn’t know who actually called the meeting, only that he received a text from Mike Shaw, director of team travel and clubhouse operations, setting the meeting for 10 a.m. Saturday.

Encarnacion: “We had the meeting because we were losing five of the last six games, so we need to get together, like a team, like we’d been doing, and we can’t lose this thing in the last month.

Entering the weekend series, the Blue Jays had just ceded first place in the division race to the hot-hitting Red Sox. In the series opener, the Jays played bad baseball in just about every way possible and the Red Sox looked the champions they aspire to be.

Encarnacion said he believes the session let the players exhale. It “refreshes your mind,” he said. They left feeling positive, he said.

The Jays offence has gone cold. Saturday marked only the fifth time in 10 games that they scored at least three runs. And while Saturday’s victory pivoted positively on pitching, the team’s pitchers have been struggling too. Their September ERA is 5.51.

“We don’t feel good the way we’ve been playing,” Encarnacion said. “That’s not the Toronto Blue Jays. That’s not our team the first five months. So we know we can do it better than we’ve been doing and we need to do it now.”

While the five veterans were instrumental in organizing the meeting, Encarnacion said, “everybody spoke.” The only anger expressed was over the way the Blue Jays have been playing and the possibility of seeing their playoff hopes collapse down the stretch, he said.

“We can’t wait to get it worse,” he said. “We are in September right now, the last month, the last three weeks, so we need to do it now.”

Grilli said he fully understands why fans have been frustrated. He gets frustrated too.

Friday’s game was so tough to watch that many fans took to the exits early. Saturday’s sellout crowd of 47,829 might have found that game hard to watch too; the Jays led 3-0 into the sixth while squandering several chances to add on and then the Red Sox started pushing back, creating a thriller.

But nobody left this one. And after Roberto Osuna struck out Jackie Bradley Jr. with the potential tying run on first base, the audience exploded in joyful pandemonium.

While he spoke in vague terms about how the Jays can stop their slide, Encarnacion said the discussion focused on shared responsibility.

Whatever happens next, no one will know for certain what effect the meeting had, if any. But at least it gave everyone a chance to air their views, Encarnacion said.

“I think everything gets clear, like you see anybody that has to say something, it’s a good time to talk, to express yourself and to let it go.”

In an interview with Sportsnet’s Hazel Mae, Jose Bautista indicated he felt the meeting gave the players a psychological boost during a period of “adversity.”

“We’re all just using today’s meeting as a refocus kind of thing, and I think we’re going to be all right,” he said.

Like Encarnacion, and as one would expect in these circumstances, Bautista was not about to reveal the specific topics of discussion.

“Especially heading down the stretch in the position that we’re in, we don’t want to take anything for granted and we don’t want to leave anything unsaid,” Bautista said. “So we just went in there and aired some things out as teammates. Obviously, I don’t feel it’s right to share (the details).”

One detail remains obvious: the Blue Jays need to start hitting again. They will try that again on Sunday against Clay Buchholz with their ace, Aaron Sanchez, on the mound, and a chance to climb back into a first-place tie with Boston.