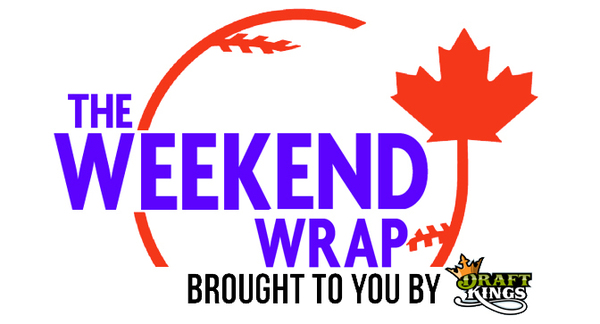 A deep-ish dig into the numbers and whatever else that was fun from the past weekend of Toronto Blue Jays baseball, brought to you by Draft Kings  — get your Daily Fantasy Sports on at Draft Kings!

I’m sure that nobody wants me to talk about how entertaining Sunday’s rubber match of the weekend’s Jays-Red Sox series was. I don’t even think I want to think about it that way. It was a frustrating and demoralizing loss in a lot of ways — most especially in the standings — and an exclamation point for Boston on what was a big weekend win. And one that started in the most hilarious way possible for them. (And I know this because I watched Friday’s game with a Red Sox fan, which was… not fun.)

But the silver linings for the Jays were obvious and plentiful, too.

We saw painfully clearly how much of a game of inches this can be and how thin the margin for error is. If Joaquin Benoit doesn’t go right back to the same pitch to David Ortiz, maybe the outcome is different. Or if Russell Martin’s foul ball hit the wall in the corner just an inch or three to the left. Or if the two shitty ground balls Bo Schultz allowed had managed to find gloves rather than sneak through holes.

That sort of stuff cuts both ways, of course. The Jays could easily have pissed away Saturday’s game and been swept. But that’s sort of the other thing. As impossibly fucking mind-shatteringly dumb that there were people that thought the Jays have been aloof about the skid they’re in, or that they don’t care or have no fight in them, this series clearly proved otherwise. They maybe didn’t come through on Sunday, but they sure as hell didn’t roll over. And Friday was incredibly ugly, but the team came right back ready to go in the next two games.

If you didn’t feel that, or if you’re still sour about this team and the three weeks to come, do everyone else a favour and just go away.

Troy Tulowitzki went into Sunday sporting just a 104 wRC+ on the season. By the end of the game it was at 108. A four point jump for a guy who had 457 plate appearances coming in is pretty nutty!

But Tulo, of course, is just making up for what was a brutal start to the season. Since he came off the DL in mid-June he’s slashed .296/.353/.514, which is good for a 130 wRC+, and makes him worth every damned penny the Jays are paying him.

And that’s before this!

Troy Tulowitzki on where the Blue Jays stand after dropping two of three to the Red Sox this weekend: pic.twitter.com/AdKrmbR8uZ

I can’t entirely avoid being a downer after a weekend like this and given the trough the Jays are currently in, so… uh… here are the innings pitched and earned runs allowed by Marco Estrada over his last five starts:

I mean, I saw that he was out on the field playing catch after Friday’s start, which allayed some fears about his aching back, but… that’s not great. It is, in fact, the numbers of a pitcher with a 7.71 ERA over those starts. He’s earned a lot of rope, especially because he’s been battling through injury, so I’m not suggesting anything wild here, but that’s… troubling.

Remember when Jon Morosi trolled Jays fans at the All-Star break by suggesting trouble if Marco Estrada and Aaron Sanchez couldn’t keep up their huge first halves either by innings limit or injury, and we were all like, “OK, sure, but why the hell are are we just assuming that’s going to happen?”

Yeah… uh… Sanchez and Estrada were worth 3.5 and 3.2 RA9-WAR respectively in the first half. In the second half those numbers, albeit in significantly fewer innings, are 1.1 and 0.0.

Add in R.A. Dickey going from 1.5 to -0.4 and… uh… are we sure it’s the struggling bats that are the biggest issue here?

1. I asked MLB about the umpires conferring to change the fair call to foul on Martin’s “double” before video review yesterday …

2. That reversal changed the burden of proof for replay officials in New York. An MLB official gave me this reply: pic.twitter.com/8oNJ2zXcom

3. FWIW, I thought the ball was foul from the outset. They got it right.

Provided we keep releasing Birds All Day mini episodes on time, this is going to be where you can find them here at BlueJaysNation.com. (Well, here and in the sidebar). Drew’s got this week’s mini ‘sode, so I’m sure it’s much more interesting that whatever I might have rambled about!

Hey, and while we’re here, if you’ve been scared off the podcast by some less-than-perfect sound quality in the past, give it another try. It’s improved and hopefully will continue to get even better!

Hey, and also since we’re here, you can help keep this podcast going while helping to keep us honest; support us with a small, recurring monthly contribution through Patreon at patreon.com/birdsallday

What do you meme?

There was a whole lot of great stuff happening on social media on Sunday (though let’s never talk about what it was like on Friday again), especially in that joyous part of the afternoon following Tulo’s incredible grand slam, but this made me chuckle.

Another angle of Brock Holt stealing home against the #BlueJays pic.twitter.com/u8vlZzyUN7

Despite the bad results that keep piling up, the Jays looked like a real threat to the Red Sox over the weekend, and so the race for the AL East is far from over — as we’ve discussed.

Um… unless they keep stumbling in their next bunch of games! Because this is really their chance to really go on a run and set themselves up to finish strong, and in charge of the AL East.

Sound crazy based on their last three series? Maybe! And yet…

After that the Jays go to Seattle for three before coming home to host the Yankees and Orioles, then finishing at Fenway from September 30th to October 2nd.

There’s also this (ignore the “bad news” bit, since those records are utterly meaningless):

Ranking the Leafs prospects prior to the draft