The schedule for the 2017 season was released today, as if we don’t have anything else to worry about.

But I think we ought to squeeze in a look at some highlights and — far more importantly — some lowlights anyway, because, for one, there are a bunch of those. And for two… uh… how much do we really want to think about the 2016 season right at the moment?

– The Jays open, for some reason, with a two-game series in Baltimore, followed by four games in Tampa Bay. ¯\_(ツ)_/¯

– No, there’s nothing weird about the off-day between those two games in Baltimore — those are always scheduled in cities that don’t have indoor stadiums, to ensure that the club has a day to honour tickets sold for the home opener, in case there is a rain out.

– The Jays’ home opener will be April 11th, and I’d complain that it’s against a National League team, but the Brewers? Classic rival! I’ll complain about it being another two-game series though, because what is not a first perusal of a schedule for if not complaining.

– Hey, look, it’s the damn Rays again. The Jays play the Rays ten times before May 8th, and seven of which come on the road. If I believed the Rays had some kind of magic power over the Jays — and, fuck, maybe I should — that might be concerning.

– Victoria Day (i.e. May 2-4) falls on Monday, May 22nd. That day the Jays have an off day before the final two games — yep, another two-game “series” with the Brewers — of an Atlanta-Baltimore-Milwaukee road trip (just in case you’re thinking of making trav– ahhh, never mind). Thanks, MLB schedule-makers!

– Of note: Joey Votto will be here! He’ll face his former team when the Reds visit the Jays from the 29th to 31st.

– In something that I’m going to dub Trash Week the Jays go to Texas on the 19th for four games, followed by a trip to Kansas City, and then they return home to host Baltimore and Boston! It’s actually two weeks, but whatever. Get the fuck outta here, trash teams!

– The middle game of that weekend set against Boston falls on Canada Day, July 1st, so the Jays are at least home for that. Oh! But hey, what’s this… because Canada Day is on a Saturday, everybody gets a day off on Monday, at which point the Jays will be… in New York to face the Yankees. Thanks again, MLB schedule-makers!

– The Jays come out of the All-Star break with 20 games in a row, beginning with a road trip to Detroit, Boston, and Cleveland. Fuck you, MLB schedule-makers!

– An actual travel weekend worth looking into comes about beginning August 18th, when the Jays travel to Wrigley Field to take on the Cubs in a rematch of the 2016 Worl– ahhh, never mind.

– Hey, and so how about the August long weekend? In 2017 it falls on the 7th of the month, which finds the Jays… with another off day. Starting to piss me off a little, MLB schedule-makers!

– OK, so to this point the Jays are at home for just one holiday all summer, meaning that Labour Day they must be… in fucking Boston??? Jesus Christ, MLB schedule-makers!

– The Jays, in fact, play 17 of their final 29 games on the road, beginning September on a Baltimore-Boston road trip and ending it on a road trip to Boston and then New York. Eat a dick, MLB schedule-makers!

So there you have it. The 2017 schedule. One good interleague road trip and almost no acknowledgement of Canada’s holidays. Whoopty fuck.

Now have a look at this whole damn thing in all its glory! (via a tweet from John Lott): 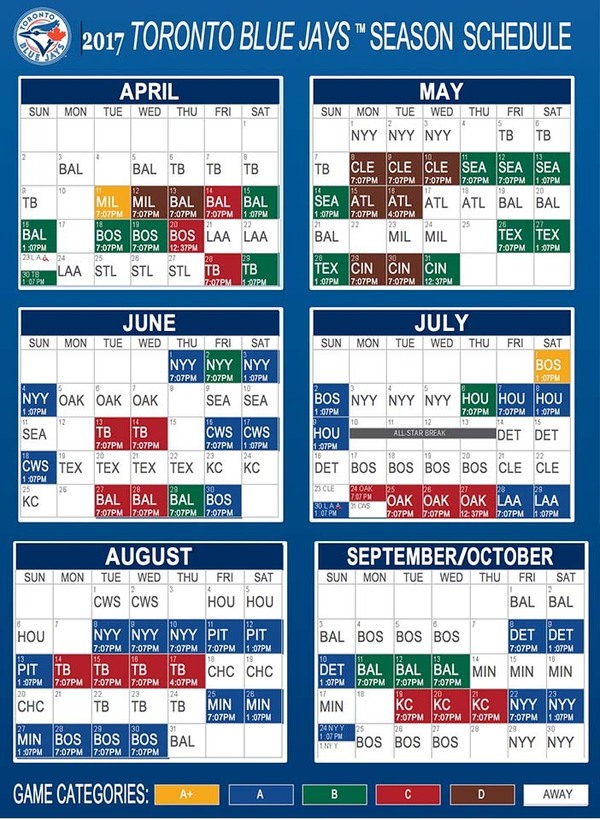 I dunno. Jays should be decent, at least! I think.

The Flames are rumoured to be interested in everybody

How the Leafs can afford Alex Pietrangelo