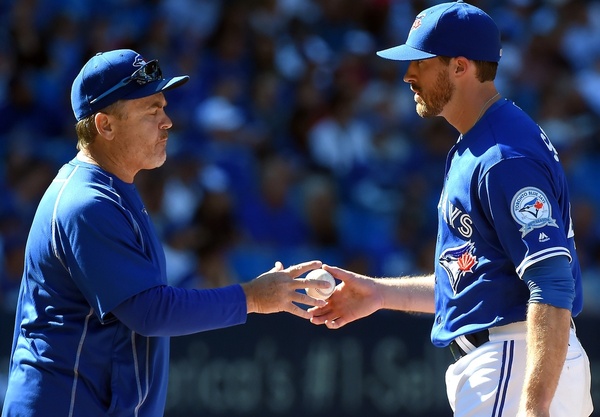 Shock and awe dominated the narrative Saturday after nine Cleveland relievers recorded all 27 outs in a 1-0 win over Detroit. Two pitches in, starter Carlos Carrasco had to leave. Ian Kinsler’s line drive broke his hand.

As a communal pitching performance, it was undeniably remarkable. And it could have happened only in September. From April through August, Cleveland would not have had nine relievers available.

Before Carrasco got hurt, the Indians were carrying 19 pitchers, thanks to an archaic rule that allows teams to expand their 25-man rosters to 40 in September.

The rule is absurd. For five months, every team must confine its rosters to 25 players. The names vary because of injuries and call-ups, but 25 is the limit. In September – the month when the stakes are highest for many teams – the rules change and they load up with extras, mainly pitchers, many of whom are selected to provide advantageous matchups against division rivals.

The rule has been around for more than a century. Everyone tries to benefit from it. But Blue Jays manager John Gibbons says many in baseball want to see it changed because it is inherently unfair. It creates a competitive imbalance by giving a sudden, month-long edge to teams who happen to have prospects available to fill a strategic need and to rich teams who can go outside their organizations to pick up useful rentals.

“I think nobody likes the (status quo), except maybe if you’re a team that’s rebuilding and you want to get a look at some of your young guys,” Gibbons told me before the Blue Jays left for the west coast.

He added that the rule might well be changed after negotiations begin in earnest for baseball’s new collective bargaining agreement. The current CBA expires Dec. 31.

“My understanding is they’re going to look at it pretty seriously because so many people are vocal about it,” Gibbons says.

Meanwhile, as the races heat up, the rule sometimes turns baseball into a pale imitation of itself. In the past couple of weeks, for example, teams in the American League East have somehow discovered 47 qualified new players to drop into the stew of a tight pennant race. Across MLB, rosters average 34.6 players at the moment.

Most notably, September’s bloated bullpens change strategies that apply over the first five months of the season and the playoffs.

When Boston beat the Blue Jays 11-8 on Sept. 11, each team used eight relievers, the rough equivalent of a full bullpen. Neither manager had to worry about the next game because he had relievers left over. (The Jays are carrying 17 pitchers, the Red Sox 18.)

Of the relievers used in that game, half were not active in the majors on Aug. 31.

Among managers, San Francisco’s Bruce Bochy would likely bleat the loudest if the current rule were changed. Bochy is obsessed with matchups, and September sends him into orbit. He is carrying 20 pitchers. No team has more.

On Sept. 7, in a 6-5 loss to Colorado, Bochy used eight relievers over the final four innings. None faced more than three hitters. Three faced just one batter each.

Across the majors, teams are carrying an average of 18 pitchers. A few of those are hurt (notably Carrasco, Stephen Strasburg and Jacob deGrom) but still officially on the roster because teams don’t need to put players on the disabled list in September.

And just about everybody is carrying three catchers. It is no coincidence that the Red Sox, Cubs and Cardinals are carrying four, maximizing flexibility in a playoff race.

And if a player on the disabled list must stay there for at least 15 days in July, why should the luxury of a bigger roster let him escape the DL in September and return to action sooner?

The roster-expansion rule is “the most ludicrous thing I see in sports,” former Milwaukee GM Doug Melvin told MLB.com in 2009. Back then, Melvin was a lone-wolf objector within baseball’s ranks, at least in public.

Gibbons says that’s changing, and he thinks the rule will too.

Critics believe that MLB and the players’ union will come up with a way to allow fewer September additions while still affording managers flexibility. Most suggested solutions recognize that some expansion is necessary, given that the minor-league season is over, which eliminates baseball’s normal feeder system.

“I think it’s probably the consensus – designate each night who’s available,” Gibbons says. “Put a limit on how many guys you could actually use in a game. You hear that a lot now.

“Maybe you can have 28 guys a night, but you’ve got to designate who those three extra guys are. Then the next day it can be a totally different group. I think that would probably do wonders.”

In the interest of fairness, my inclination is to keep the 25-man roster in September. If it was good enough for the first five months, why change it for the stretch run?

But that’s not practical, given that the pool of available minor-leaguers dries up after Labour Day. Two possible compromises:

1.   Go with some version of that “consensus” Gibbons mentioned. Limit the number of call-ups to five or six, for example, with only two or three activated per game. Barring an injury, no deductions from the Aug. 31 roster would be allowed to accommodate extra players.

2.   Create a taxi squad of five players who would work out and travel with the team but could be activated only to replace players who get injured. And if designated as injured, that player would have to go on the DL for at least 15 days, just as he would during the rest of the season.

Expect the players’ union to drive a hard bargain if this comes up in CBA talks. The union likes the status quo because callups get big-league pay and service time. The proposals above would not change that aspect, but they would cut roughly five players per club, based on the current September average of about 35. The union would not be receptive.

So perhaps the answer is to add a couple of extra players per team for the whole season and a couple more in September. At least to some extent, that would address the inequity in the current policy. It might also mollify the union.

But change is overdue. If everybody gets 25 for five months, nobody should get 35 in September.