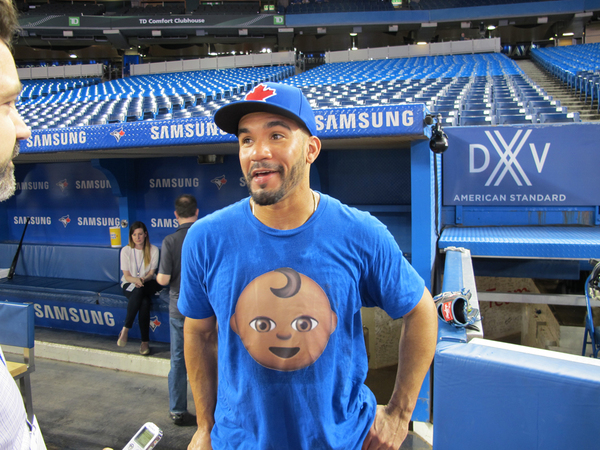 “He’s like a newborn,” said Blue Jays teammate Ryan Goins. “He sleeps and eats and poops, that’s all he does. And gets hits.”

So in keeping with this oddball description, Goins ordered a set of T-shirts with a baby-faced emoji on the front and Travis’s name and number 29 on the back. The parcel arrived Friday afternoon, before the Blue Jays opened a four-game series against the Yankees, and most of the players wore the shirts for batting practice.

“I’m always either late to breakfast or I’m asleep and I don’t make it, so that’s how (the nickname) started,” Travis said.

He acknowledged that his recent ribbings always include the sleep-eat-poop elements.

“I guess that makes me a baby,” he said with a smile. “So the guys love it. It’s a little bit of fun. I guess I better embrace it.”

Goins insisted that Travis and the emoji have “very similar faces,” which underscored the mockery Travis has been getting.

The baby-faced emoji is smooth-skinned and bald, except for a single curl on the forehead. For most of the season, Travis has sported a considerable shock of gold-tinted curly hair (he recently had it cut short) and his five o’clock shadow is in full bloom by noon.

“It caught me off-guard today, so I’m embracing it,” Travis said. “It is a little bit weird, but it’s pretty cool to be able to have fun at this time of the year.”

Travis is one of the few Blue Jays hitters having fun in September. He’s batting .354 this month. Collectively, the rest of the offence is hitting .215.

Travis’s September surge included a 17-game hit streak, during which he batted .392.