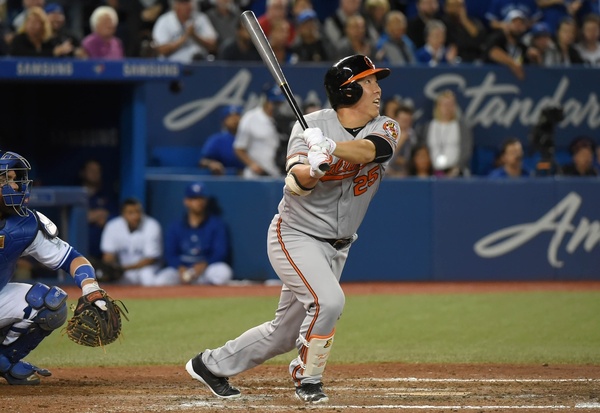 On Monday night against the Yankees, Jason Grilli entered the ninth inning to protect a 3-2 lead. He gave up four runs. Three came on homers. Afterward, the usually affable veteran declined to take questions from the media.

The next afternoon, he granted a brief audience to two reporters, of which I was one. In the context of his heavy workload, mostly as the Jays’ primary setup man, I asked whether fatigue was setting in.

Then he noticed a mob of media wading into the interrogation.

“Oh, here we go, OK,” he said, smiling but clearly irritated. “Here we go. What’s the questions here? Now we got the questions.”

They went unanswered. Grilli promptly excused himself and joined his fellow pitchers outside for their afternoon stretching session.

On Wednesday night, after he gave up a late homer in the Orioles’ 3-2 win, he faced the cameras and the same question. This time, he replied: “Everybody’s tired. We’re all on a level playing field that way.”

At this time of year, it is true. And perhaps it was easier to admit to fatigue late at night after a disheartening loss than on Tuesday afternoon, when he and his teammates were hitting the reset button for the 157th time this season.

Baseball starts fresh every day. And in September, in a torrid playoff race, it is more important than ever for players to fool themselves into thinking that what happened yesterday is ancient and irrelevant history.

Which is what the Jays must do on Thursday as they try to take two of three from the Orioles and restore their lead to two games in the wild-card race. If they are to win that game, they will likely have to do it without the weary duo of Grilli and Roberto Osuna, who have formed a forbidding back end of the bullpen since Grilli arrived in a May 31 trade.

After Wednesday’s loss, those inclined to point fingers were targeting Grilli, of course, and Osuna, who gave up a two-run homer to Hyun Soo Kim, a very good left-handed hitter who whacked a 96-mile-an-hour heater that looked far enough inside to be a ball.

Osuna said he wanted it up and in, just under Kim’s hands. It ended up too far down.

After trying to hit to the opposite field earlier in the nine-pitch at-bat, Kim opened his hips, kept his head down, swiveled his body and unleashed a looping swing that put the ball into the bullpen beyond the right-field fence.

“That kid’s a tough out,” Toronto manager John Gibbons said. “Nobody knew anything about him coming into the season, but you watch him all year, he’s got a great ability to foul off tough pitches and stay alive. He uses the whole field. He’s really nice pickup for those guys over there.”

Kim’s homer was a crusher for nearly 45,000 fans who had come to see the Jays extend their wild-card lead to a watertight three games over Baltimore. Now the margin is back to one, and not only because Grilli and Osuna could not protect a 2-0 lead.

Once again, the Jays’ offence was anemic. They mustered six hits. This month, they are averaging 3.88 runs per game and giving up 4.24. They have lost 15 straight games in which they did not hit a home run. Their record is 11-14, the same as it was in April.

Until now, April was their worst month.

Until Kim homered, the at-bat of the game had come in the Orioles’ fifth inning. They had loaded the bases with two outs against Francisco Liriano, who was otherwise pretty well unhittable.

This time, he faced slugger Chris Davis in a left-on-left showdown.

Liriano already had eight strikeouts by then, seven of them swinging. Batters could barely touch his darting slider.

After getting a foul strike on a fastball, Liriano threw four sliders in a row. Davis managed to nick the fourth one to stay alive in a 2-2 count. On that prodigious swing, the crowd roared, then groaned when they saw the ball stuck in the dirt.

Davis had every reason to expect another slider or a fastball. But Liriano had saved something special for this moment: a pitch he had not thrown, not even once, since arriving from Pittsburgh on Aug. 1.

He even surprised his catcher, Russ Martin.

I asked Martin: What did you call?

After battling 87-mile-an-hour sliders, Davis froze on the curveball, which registered 79. The pitch might have been high; Davis certainly thought so. Martin, the master framer, deftly pulled it down a titch.

Liriano, an 11-year veteran at 32, said he started learning the curve for the first time in Pittsburgh this year.

“I’m going to continue working on it in the off-season and hope it gets better next year,” he said.

According to Fangraphs.com, his curveball accounts for 0.02 percent of all his pitches this year. He has thrown 2,793 pitches. That means he has broken out the curve about six times.

Davis was the first American League batter to see it.

Liriano has been a surprisingly welcome addition to the rotation. He hauled a 5.46 ERA from Pittsburgh to Toronto. As a Blue Jay, his ERA is 2.92 in 10 starts. In eight of those, he has allowed two or fewer runs.

His performance gives Gibbons plenty of confident options if the Jays make it to the playoffs.

Among fans and some of the media, however, sudden angst surrounds Grilli and Osuna. Neither has lost velocity in recent outings, but their pitches are catching more of the plate more often. And sometimes, they are simply losing battles to good hitters. Trumbo and Kim are the latest examples.

And with the loss of Joaquin Benoit to injury, Gibbons acknowledged that he will need to rely more on Brett Cecil in the late innings, which might not be a bad thing. Cecil has not allowed a run over his past 15 outings.

Osuna insisted that he feels fine – what else would he say? – and that he and his bullpen mates will buck up over the remaining four games of the regular season.

“We’re playing against the best teams in the major leagues in our division,” he said. “Stuff like today, it’s supposed to happen sometimes. But I’m not worried at all. We’re going to be in a good position after the next four games.”

Added Grilli, with a smile: “This is what September baseball is like, right?”

Right. Tight and scary and edge-of-your-seat terrific. And for fans, the stuff of madcap day-to-day deductions if your team wins or loses.

Grilli is right. This is where teams want to be in September.

The Orioles are fighting for their playoff lives. And after Wednesday’s loss, so are the Blue Jays.