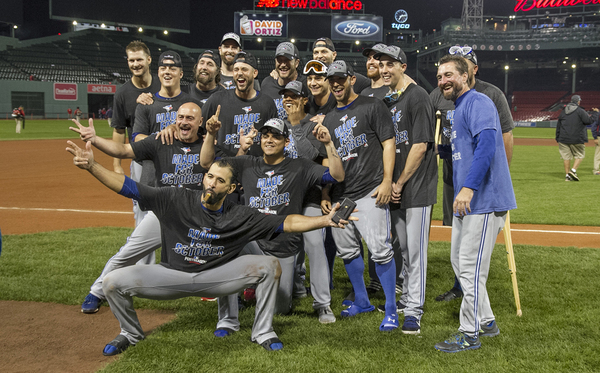 Blue Jays pitchers and their coaches gathered for a photo after Sunday’s game, with a ringer in the front adding some smoke to the gathering. Photo by John Lott

BOSTON – Where to begin?

With Aaron Sanchez, who talked management into letting him start all season and pitched brilliantly in Game 162?

With Troy Tulowitzki, the veteran whose defence dazzled once again and who delivered the game-winning hit?

With Devon Travis, who was a forlorn figure awaiting a second shoulder surgery a year ago but who rebounded this season and hit a Monster home run on Sunday?

With Roberto Osuna, the 21-year-old who pitched six times in the past nine days and locked down the two biggest games of the year on Saturday and Sunday?

Each one was a vital constituent in the Blue Jays 2-1 win over the Red Sox on Sunday, an edgy affair that caused stomachs to tighten and teeth to clench among Blue Jays fans who simply could not believe their team was playing in another game like this.

But this one made the Blue Jays a playoff team for the second straight year and gave them home-field advantage for Tuesday night’s wild-card game against Baltimore.

With all due respect to the aforementioned contributors, let us focus for the moment on Russ Martin, a remarkable catcher with a remarkable charm. His teams almost always make the playoffs. In the past 11 years, he has missed the postseason only twice.

And here we go again, after he nudged and coaxed and cajoled four pitchers through the most harrowing nine innings of their lives.

First there was Sanchez, who took a 1-0 lead – and a no-hitter – into the seventh before yielding a barely-fair homer to Hanley Ramirez.

Then came Brett Cecil, the rejuvenated veteran, and Joe Biagini, who had never been this far before, and Osuna, who reminded someone in the beer-soaked clubhouse later that yes, he is old enough to drink now, unlike during last year’s celebrations.

Martin acknowledged that his stress level rose in those last few innings as he worked with two-pitch pitchers and tried to outguess the shrewd Red Sox batters.

“Absolutely,” Martin said with a smile, wiping beer from his beard. “For sure it’s stressful. But it’s a good stress. It’s a challenge. The fact that I’ve been there before obviously helps. The fact that I know my pitchers well, that helps. You don’t always know what’s going to happen.”

What happened next proved his point. Someone walked up behind him and emptied another can on his head. But he kept talking as he rubbed the sticky sting from his eyes, lapsing into clichés about overcoming adversity and staying focused.

Soaked and smiling, he was doing just that. 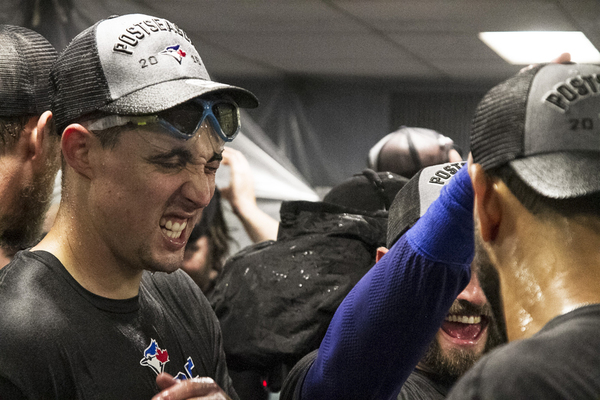 Management insisted for much of the season that Sanchez would eventually go to the bullpen to protect him from overwork as he approached, then pushed through, his previous innings ceiling. Ultimately, they relented, partly at his insistence and briefly used a six-man rotation to give him extra rest. He finished with a 15-2 record, a 3.00 ERA and 192 innings.

Martin thinks he will only get better. Sanchez threw mostly fastballs on Sunday, but he has that reliably nasty sinker and an improving curveball that finished three of his six strikeouts.

“Sanchy threw the ball unbelievable,” Martin said. “For a second there I thought he was going to have a no-no. The defence too. The way we played today is how we’re going to need to play if we want to win in the postseason.”

He added that it would help too if the batters could chip in a little more often.

One who has been reliable is Travis, whose two hits off Price helped him finish with an even .300 average, tops on the team. His homer was his 11th.

As is his habit when he does something that quickens the pulse of Blue Jays fans, he said he simply blacked out for a moment when he hit it.

“I was just frantic, man,” he said during a brief pause between champagne and beer showers. “I saw (first-base coach Tim Leiper) do a little celebration and I knew I got it.”

A year ago, Travis was suffering between surgeries. His August operation was officially described as a “general cleanup,” but it did nothing for the lingering pain in his left shoulder. He traveled with the team for a time near the end of the season, a shadowy figure in the clubhouse of a team blissfully on its way to a division championship.

Then came another operation that finally fixed the problem. A long rehab followed. His season didn’t start until late May. Finally, he was part of it, and no Blue Jay has hit more consistently.

“Just absolutely incredible, man, to be a part of something like this,” he said. “It’s a kid’s dream.”

Tulowitzki, who has quietly taken over as the team leader, made several terrific defensive plays at shortstop and flared a two-out single to centre field in the eighth that drove in the deciding run.

Martin, who bats ahead of him, kept the inning alive with a single of his own.

Then it was hold-the-fort time. Martin guided Cecil through two batters and Biagini for two more before Osuna emerged from the bullpen to start the ninth.

Osuna had thrown two innings the night before. But he came in hot, consistently hitting 97. Martin got him to mix in several sliders, particularly to Ramirez who drew a full-count walk after two were out. Xander Bogaerts then singled and suddenly the Red Sox had the potential tying and winning runs in place.

But Osuna, sticking with his fastball, coaxed a ground ball to third from Jackie Bradley Jr. For Jays’ fans, the world seemed to stop for a moment. Josh Donaldson collected the ball, took his time and made a deliberate throw to first.

Afterward, Martin said he knew Osuna had to get the ball again, even though he has been ridden hard in recent games.

“He’s got ice in his veins,” Martin said. “For a young kid like that to go out there and do what he’s done all year, same thing last year, he’s been tremendous for us. I have tremendous faith in that guy.”

So, obviously, did John Gibbons.

“With two innings last night, he bounced back today,” the manager said. “He looked like he was on three or four days’ rest. That’s good. If you’re playing good and winning games, those guys are going to pitch a lot.”

It is hard to overestimate the contribution of Martin. At 33, he played in 137 games, his most since 2009. He battled a neck injury early in the season and kept catching. Like all catchers, he is battered and bruised at this time of year, but he long ago found ways to endure the slings and arrows of a long season and, of course, to keep going after most teams have gone home.

“Just to have a ticket to the dance feels good,” he said. “We grinded all year. We know we had guys banged up for a while. Obviously every team goes through that. We showed a lot of guts this year. Now that the regular season’s over, it’s time to move on and keep playing like today.”

He added one caveat. To play beyond Tuesday, the Jays have to hit. They had four hits in each of their two wins against Boston.

Indeed, their pitching has carried them all year. Martin has carried a lot of that load too.