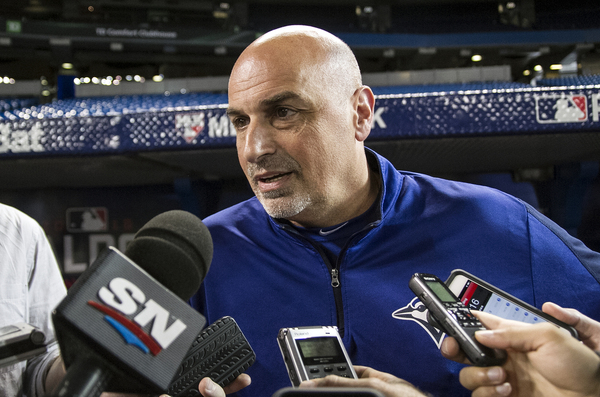 For a man who took a line drive to the back of his head, Francisco Liriano received the best possible news. And after the Blue Jays delayed their flight home to await his arrival from hospital, there were sighs of relief all around when he walked on the plane.
“He seemed perfectly fine – normal. Walked right on and said hello to everybody,” said teammate Aaron Loup.
Tests showed Liriano suffered a mild concussion from the 102-mile-an-hour line drive hit by Texas Rangers outfielder Carlos Gomez late in the Jays’ 5-3 win in Arlington on Friday. He was taken to hospital by ambulance and cleared to fly home.
And on Saturday in Toronto, he underwent a second battery of tests under Major League Baseball’s concussion protocol. The results were encouraging.
“All the tests today were all normal,” head trainer George Poulis said. “It was great. We’re very excited how he felt today. So is he.”
The protocol requires another round of tests on Sunday. If Liriano passes those, then he must also pass a series of exertion tests and be cleared by both team doctors and MLB before returning to action. That process will likely take at least a couple of days.
While the news on Liriano’s diagnosis is good, his absence could undermine the health of the bullpen as the Jays try to finish off the Rangers after winning the first two games of their ALDS on the road.
However, under a new concussion rule for the playoffs, the Jays have been granted permission to replace Liriano on the ALDS roster with right-hander Danny Barnes. If the Jays reach the league championship series, Liriano will be eligible to play, provided that he has been out of action for at least seven days. Normally, an injured player who is replaced is not eligible for the next playoff round.
Advertisement - Continue Reading Below
Switched from the rotation to a relief role for the playoffs, the veteran left-hander played a pivotal role late in Toronto’s wild-card win over Baltimore. He was in Friday’s game to protect a late lead before Gomez’s liner caromed off his head and landed in centre field.
“It stunned me because he didn’t go down,” said catcher Josh Thole, who was watching from the bench. “You don’t want to see a teammate leave in an ambulance. That’s where it hits you. It was scary.”
*** 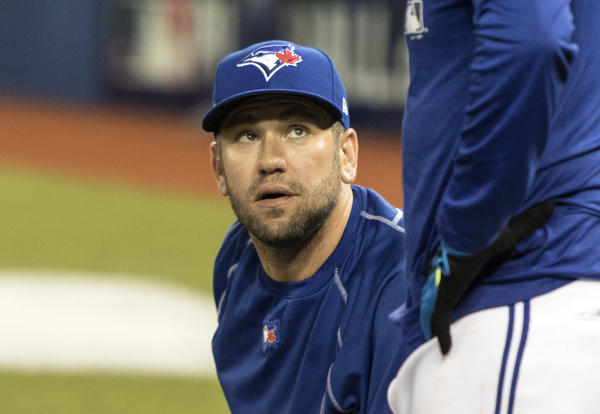 Thole could emphasize on a very personal level. He suffered through a scary period of his own in 2012 after a collision at home plate left him dazed, confused and sick to his stomach. His concussion symptoms were severe.
At the time, Thole was the Mets’ regular catcher. Philadelphia’s Ty Wigginton slid awkwardly into the plate, and as he popped up, his elbow smashed Thole in the left temple.
Thole walked up the tunnel on his way to the trainer’s room, but he was so disoriented that he turned left instead of right, sat down in a massage room and waited. It took a while for the medical staff to find him.
“I was scared,” Thole recalled Saturday. “I was so messed up, I just laid in my apartment in New York in the dark, and even the noise outside bothered me. I did that for about 10 days before I even felt like I wanted to do anything. Then you go see the doctors every day. You’ve got to do like computer tests at that point, CT scans, MRI stuff on your brain. And then you’ve got to get cleared. The team doctors clear you, but then MLB has to clear you.”
He missed almost a month.
It took MLB more time than expected to sign off on his paperwork, delaying the start of his minor-league rehab assignment by two days. Since instituting its concussion protocol in 2011, it has been evident that MLB’s medical experts are meticulous in double-checking the reports from a player’s team before clearing him to return to action. So even though Liriano’s early tests represent good news, it is impossible to know how he will respond to the exertion tests and how long it will take for him to receive clearance to pitch again.
But no one on the Blue Jays’ plane was worried about that on Friday night. They were simply thankful that Liriano was able to come home with them.
“Mike Shaw (director of team travel) came to the back and said we’re going to wait about 45 minutes because Liri just got discharged,” Thole recalled. “I said, ‘we’ll wait for two hours if we have to.’ You see a guy leave in an ambulance and then he gets on the plane, it’s a big relief.”
“The concussion protocol in Major League Baseball – in all sports – is so regimented. So for him to get cleared from the hospital and be able to get on the plane – I’ve had a few concussions, and believe me, the last thing you want to do is get on an airplane. He came on the plane like nothing happened.”
***
Meanwhile, the Jays remain uncertain whether Devon Travis will be in the lineup for Game 3 on Sunday night at the Rogers Centre. The second baseman and leadoff hitter has a bone bruise – but no structural damage – in his right knee, Poulis said.
The head trainer described Travis’s test results as “very good” and said he received a cortisone injection on Saturday.
Poulis said it normally takes four or five days for a cortisone shot to take effect, “but that doesn’t mean he can’t play within four or five days.”
In short, no one knows when either Travis or Liriano will play again.
Travis told the medical staff that he doesn’t know how or when his knee was injured. “It came on gradually over the past few days,” Poulis said.
So in a medical context, the best prospect for the Jays is clear: a deep start by Aaron Sanchez on Sunday and a sweep of the Rangers, which might minimize the loss of Travis and Liriano.
That would give the injured parties – and everyone else – four days of rest before the ALCS begins.