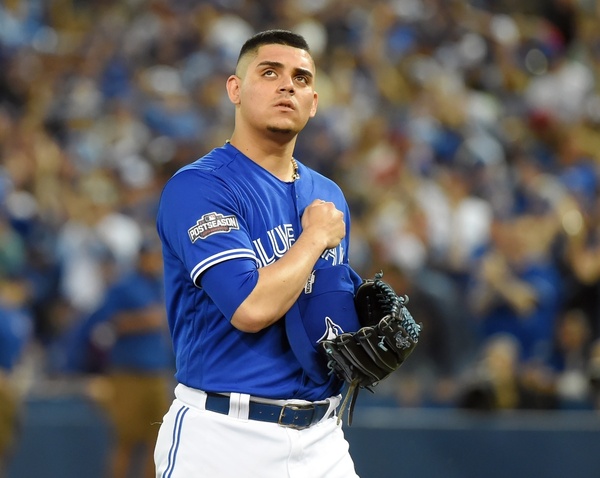 Well-versed Blue Jays’ fans might have felt a touch of unease Sunday night when Roberto Osuna returned to the mound to pitch a second inning against the Texas Rangers.

A closer is primed to work one inning at a time. In three of Osuna’s previous four appearances – all high-stakes occasions, like this one – he had pitched more than one inning. Two days earlier, he had thrown a taxing 31 pitches over 1.2 innings to lock down a 5-3 win at Texas.

In Game 3 on Sunday, he had breezed through a perfect ninth to preserve a 6-6 tie. Still, this was his 75th game of the season. The Jays already held a 2-0 lead in the series.

For the brain trust, keeping Osuna in the game was not an easy call.

“At this stage of the year, we didn’t want to,” pitching coach Pete Walker said in the clubhouse as the Jays celebrated on Sunday night.

“That was not ideal. If he was in double digits as far as number of pitches, we might not have sent him back out there. But he had only eight pitches in the ninth, and he said, ‘I feel great. I want this.’ When he has that kind of reaction to you, it made the decision a lot easier. He was sensational. They all were.”

Meaning the entire bullpen corps in the series clincher. After Joe Biagini gave up a two-run double to Mitch Moreland, the first batter he faced after relieving Aaron Sanchez, Blue Jays’ relievers set down the final 13 Rangers in order. Osuna retired the final six.

Just beyond the left-field fence, bullpen coach Dane Johnson had Ryan Tepera warming up for the 10th. He could not predict how the dugout conversation would go. Then the bullpen phone rang.

“When Pete called down, I knew Roberto had thrown minimal pitches in that ninth inning,” Johnson said. “I was waiting for the call. I didn’t know if he was going back out, or if Tepera was in the game. But when Roberto came in, he specifically said, ‘I want to stay in the game.’ That’s just a tribute to Roberto and what he’s meant to this team all year.”

Johnson was not particularly surprised. But was the decision itself a concern?

“It was, given what Roberto’s been through and because of the load he’s been taking, not only in the last couple weeks but the whole year,” Johnson said.

In the bottom half, Josh Donaldson created another magical moment in Blue Jays’ lore with a daring dash home from second base when the Rangers botched a double play. The Jays are heading to Cleveland for the ALCS opener on Friday.

Sure, Osuna insisted that he could handle a second inning. But given the situation – the closer’s indomitable mindset, the pressure to be the man in a big moment – what else would he say? No reliever, even a tired one, is inclined to retreat from those circumstances.

But Osuna’s sense of invincibility was only part of the decision, general manager Ross Atkins said. The call is not made in a vacuum. A larger context is always considered, with the player’s well-being most important.

And all season, manager John Gibbons has dealt adroitly with that context, the GM said.

“That’s something that Gibby has managed very well all year … I’ve been really impressed with Gibby putting the person before the player, and thinking about their career and their future,” Atkins said.

Gibbons, Walker, Johnson, the training staff and conditioning co-ordinator Chris Joyner each subsidize that context. Their input is important, especially when a pitcher like Osuna is lobbying to work in an “atypical” situation, Atkins said.

“There are thresholds,” he said in a media conference call on Sunday. “There are benchmarks that everyone looks to, that are industry-wide and that are based on experiences. And then there’s the individual and the situation and the circumstance.

“I think all too often what can become overstated is what the industry (standard is), or what is normal, as opposed to what’s best for this individual. And I feel as though Gibby has always had that at the forefront – what’s best for this individual, are we sure we’re OK pushing here, and then secondarily, what gives us the best chance to win. He’s managed that well.”

All that aside, how can anyone be sure that Osuna, or any other pitcher, is on the level when he says, put me in, coach, I’m ready to play?

“We have that discussion ourselves,” Atkins said. “It comes to not simply relying on that one piece of information, but (also) how they’re recovering, what their treatment was, how their throwing program was, did they alter their routine in a way that would suggest we’re putting them in a dangerous situation.

“So it’s more than just that one question. But we will always ask the question.” 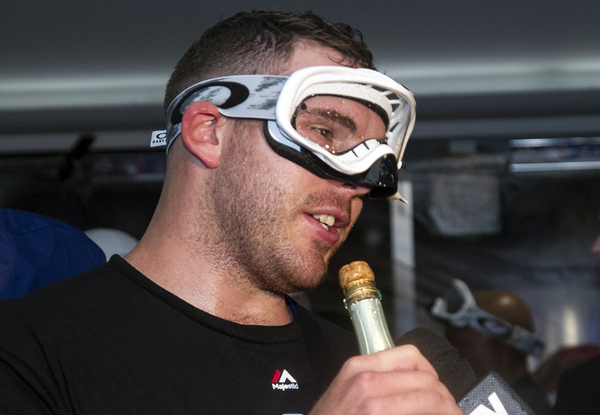 Joe Biagini uses a champagne bottle as a faux microphone during an interview after Sunday;s clincher against Texas. Photo by John Lott

The Blue Jays’ bullpen ERA was 4.11 in the regular season, good for 12th among 15 American League bullpens. In 29 September-October games, that number rose to 4.80.

That stretch covers the last two regular-season games in Boston, which clinched a playoff berth, plus the wild-card victory and the three-game sweep of Texas.

Time will soon tell if that represents a trend or a blip. The arrival of Jason Grilli in May and Joaquin Benoit in July added stability and veteran leadership. But Benoit is injured and likely gone for the postseason. And Francisco Liriano, who switched from the rotation to a relief role for the playoffs, suffered a concussion when a line drive hit him in the head last Friday in Texas. If he passes all tests in MLB’s concussion protocol, he could be eligible to rejoin the Jays for Game 2 of the ALCS on Sunday.

That uncertainty places an even brighter spotlight on Joe Biagini, the Rule 5 pick who had not pitched above Double-A before this season and who had never worked a six-month season, let alone faced the pressure of the playoffs.

In four outings over that recent six-game span, Biagini has not allowed a run.

If Liriano, a left-hander, had been available Sunday night, he probably would have come in to face the lefty-hitting Moreland, Walker said. The Jays considered lefty Brett Cecil as well, but decided to save him for the eighth.

After Moreland’s double, Biagini got the next four outs. Grilli got two more. Cecil disposed of left-hitting Rougned Odor to close out the eighth. Osuna did the rest.

Biagini has been a bullpen bulwark, a slightly eccentric sort who casually talks in interviews about the team’s apocryphal crochet lessons and his passion for fingerpainting.

“Unbelievable character,” Johnson said with a small smile. “Unbelievable presence, the way he handles himself on the field. He’s stuck with all of his routines through the whole year. It’s unbelievable what he does every day to prepare himself to go out there to pitch, and the versatility he has shown down the stretch in the sixth, seventh and even the eighth inning sometimes.”

In the regular season, Biagini posted a 3.06 ERA in 60 games. He allowed runs on only seven occasions. He worked more than one inning 21 times. And after a rough patch in his first September of work, he seems to have found his groove again.

By the numbers, the Blue Jays have the best starting rotation in the league and a bullpen that is well below average. But as they head for Cleveland and the ALCS, they hope their relief corps can turn a recent small sample size into a well-timed trend.

That might well become the key to beating Cleveland and advancing to their first World Series since 1993.