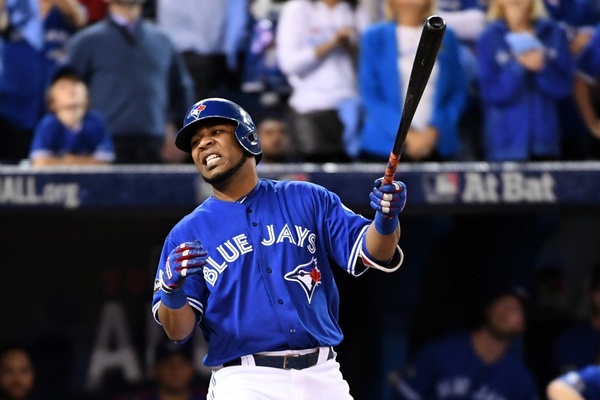 Hey, did you hear that teams are allowed to re-sign top free agents that didn’t really ever want to leave in the first place, even after they’ve reached free agency? I know it sounds weird, but apparently it’s true, as Yoenis Cespedes has agreed to stay with the New York Mets. He’ll get paid $110 million over four years, which maybe says something about the market for Edwin Encarnacion.

This is the part where I’d say something snide about the fact that the market for Encarnacion doesn’t really matter for us Jays fans, apart from how it’s going to be news when he signs elsewhere. However! Rick Westhead of TSN.ca has swooped in with a new report that miiiiiight give some hope to the idea of the Jays bringing back their beloved slugger.

“Edwin Encarnacion’s agent says the Toronto Blue Jays free-agent first baseman will probably sign a contract later this week or early next week, and that the Blue Jays are ‘showing Edwin the most love,’ ” he writes.

Westhead adds that Edwin’s agent, Paul Kinzer, says that three teams are waiting for the new CBA before making an offer, and that two teams have made “serious” offers. He also tells us that Kinzer says the Cespedes deal seems like a good comparable for Edwin, despite having earlier told Westhead that his client was looking for something like five years and $125 million.

There are a few ways we can think about this. My initial reaction is that it just doesn’t make sense that the Jays would be entertaining this idea after already having signed Kendrys Morales. It’s not that Morales and Edwin couldn’t both split time between first base and DH, especially in year one. But locking down both positions for three years (the length of the Morales contract) with guys already in their mid-30s with some age-related red flags already, and for a cost approaching $40 million, just doesn’t seem like something any team would do.

In my heart I sure as fuck want to see them try, but keeping the DH spot a little more flexible seems like a pretty good idea — though Ross Atkins might tell you that Morales could play in the outfield a little bit to maintain that flexibility (a notion that sounds terrifying, though having Kevin Pillar out there with him would at least help a little). Also: that’s a whole lot of money for a team to spend and still have holes in both corner outfield spots, in the bullpen, and at backup catcher.

The Jays should have more than enough money to spend to do this and everything else they need to do. And one sometimes even wonders — or at least I do — if the front office maybe has been given two budgets; one with Edwin, one without. But that sort of talk feels much more like fantasy than reality. Even if — as I’ve already seen suggested — Morales carries a small enough salary that he might be movable next winter or at some point in 2018.

More likely, though, is that this is Edwin’s agent playing the media.

Kinzer has put an artificial deadline — albeit a somewhat soft one — on teams who might be interested, by saying that Edwin will probably sign within a week. He’s put pressure on the teams waiting for the CBA to be resolved by saying that there are serious offers out there. And he’s used the Blue Jays — who, thanks to a bunch of fucking morons and their misplaced outrage over reports that David Price “WASN’T EVEN OFFERED A CONTRACT!”, are sure wary of looking too disinterested in retaining a beloved player — to imply to other suitors that they need to do better.

Maybe a move like that would be so transparent that it couldn’t possibly be true, but I wouldn’t hold my breath on this one. Expect that we’ll hear the Jays had strong interest, but that eventually some other team — hopefully Houston (who reportedly went hard after Cespedes and now have a bunch of money they want to spend) and not fucking Boston or New York — swooped in with a better offer and, reluctantly, Edwin moved on.

Hey, and that way if the Jays actually do manage to sign him, it’ll at least be a seriously goddamned pleasant surprise.

Oilers Prospect Update: A nice Kesselring to it

JN Recap #60: Jets Beat Blackhawks On A Sunday Yet Again