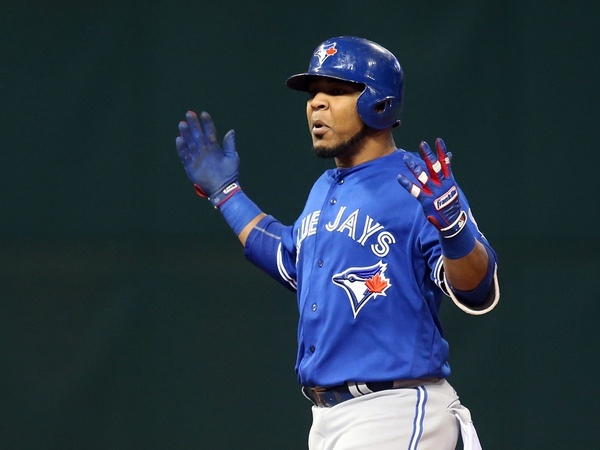 “Whut? You mean I shouldn’t get on a plane to Houston???” Photo Credit: Charles LeClaire-USA TODAY Sports

Hey, so remember that thing where we were hearing that Edwin Encarnacion was going to sign with the Houston Astros at some point today? And nobody seemed to want to touch it except a couple of very confident White Sox bloggers?

Well the clock is ticking and we’re haven’t seen any movement in that regard yet. In fact, we’re seeing the opposite:

Edwin Encarnacion’s agent, Paul Kinzer, just told me there is “nothing imminent” at the moment for him with a free-agent contract. (1/2)

I groan whenever Sportsnet rushes to turn whatever came out of Morosi’s mouth during his latest Fan 590 radio segment into some kind of a news item, but this really is actual news!

And it’s interesting news, because ol’ Bunglefuck Kinzer said in at least one of his several other comical attempts to play the media that there are teams who were waiting to make a bid on his client until the league’s CBA negotiations had resolved — and, in particular, until the new luxury tax threshold becomes known.

Lo and behold, that appears to be what’s happening as we speak:

Source: MLB, MLBPA have moved close to an agreement on parameters of luxury tax system, believed to be one of the major remaining issues.

This, of course, doesn’t mean that he might not still go to Houston. But it also means that the Yankees, Dodgers, and (ugh) Red Sox — three teams that Jon Heyman notes have a particular interest in seeing where the luxury tax goes — might get a chance to make a late bid. Which… for fuck sakes, just go to Houston already!

Because as thoroughly convinced as I am that Edwin isn’t going to be coming back to the Blue Jays, I’m not going to be convinced that he isn’t going to the fucking Red Sox until I see Ken Rosenthal tweet out the signing details with my own two eyes. Because, as brimming with potential DHs as the Red Sox roster may be, if the front office is anything like the fans and media, they’ll have swallowed hard on all the “natural heir to David Ortiz that we’re entitled to” stuff. And holy piss, would that ever suck.

Which, again, isn’t to absolve Rogers for not giving the team enough budget flexibility, in this era where fans are now paying through the dickhole for tickets, going through the turnstiles at rates not seen since the early 90s, and watching on TV in numbers that are fucking daffy. Because they should totally be able to sign Edwin and do a whole lot else to keep this team afloat in the near term while the long-term building of the farm system goes on in the background — precisely as those smart, rich teams Heyman mentioned do it.

But if they’re not going to do it, for the love of fuck, let’s not have to watch Edwin play for the goddamned Red Sox. Eh? The thought of that alone is worth the Jays rethinking what they’re willing to offer him!