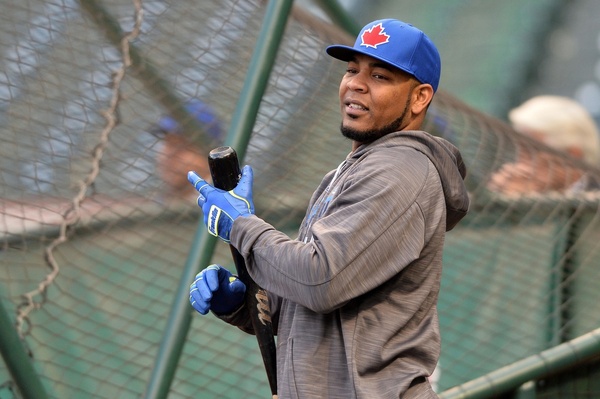 Did you hear the most shocking thing in the world?

NO! Not that Toronto FC has actually made the MLS Cup Final. I mean sarcastically the most shocking thing in the world. You know: that all the talk about the potential for an MLB lockout if the players’ union and the league didn’t agree to a new CBA by midnight was just bullshit posturing!

Colour me astonished. The league and the players aren’t dumb enough to piss away a bunch of money.

But now that the work stoppage has been “narrowly” averted, that next week’s Winter Meetings are back on (sorry nerds), and that the luxury tax threshold is now know, what the hell does it all mean and where to we go from here?

First and foremost, to the Dominican, apparently! At least if you’re Edwin Encarnacion and his agent, Paul Kinzer.

Jon Heyman tweets that the pair are in the D.R., not Houston, and despite a day of breathless with anticipation for him signing with the lesser-of-several-evils Astros, a deal isn’t close.

Furthermore, TSN’s Rick Westhead tweets that Kinzer says the report about Edwin signing with Houston is “FALSE”. I’m not sure if the all-caps are from Westhead or Kinzer, but the agent adds that the reporter who was saying as much “didn’t even call me.” Because, y’know, Kinzer would be the only person to know if he and his client had agreed to a deal with the GM of a team for him to play there.

And Mark Berman of Fox 26 in Houston tweets that Kinzer told him, “It’s a great fit. It makes sense. But all those rumours are false.” He then reiterated that nothing is imminent.

So… there’s that. And there’s now the spectre of the fucking Red Sox getting in on the action, too.

But OK, what something with Edwin was imminent?

There have been some changes to the CBA, including to the draft pick compensation process regarding free agents, and in everybody’s rush to tweet out the details, I think some important nuances seem to have been missed. Specifically, the fact that the new rules aren’t going into effect immediately. (And even if they were, they probably wouldn’t have changed the compensation that the Blue Jays were due to receive — though, as you’ll see below, that would actually be dependent on how much Jose Bautista signs for).

I remember from the last time the CBA expired that the league and the players were very careful with how they implemented the changes, so as not to destroy long developed plans — such as the way Alex Anthopoulos had been gaming the system by trying to stockpile “Type B” free agents (and thus sandwich round picks when those players signed elsewhere). Those were much more significant changes, so the same type of care really isn’t quite going to be needed here, though, as I will let Ken Rosenthal explain, the system going forward will be a little bit different:

Team that loses QO free agent will get pick only if player signs contract of $50M+. Pick it gets will depend upon that team’s market size.

Club that signs QO free agent, if it does not exceed luxury-tax threshold, will lose 3rd-rounder.

Nobody has to fret that the Jays won’t get their draft pick if Bautista if he signs for, say, $49 million. But it sure is interesting to think of some of the decisions that will need to be made in the future because of this rule. There will certainly be players traded who might have otherwise been allowed to leave via free agency and given a qualifying offer — though this will be mitigated by another new rule: a player can only receive a qualifying offer once in his career.

So… that’s interesting! Or, at least, it will be in a year!

Also of note, since we’re already here: the season will now start mid-week, and will be five days longer, giving players additional days off during the year, and allowing them to accrue that much more service time, as well. Though that also, of course, won’t be the case until 2018.

I’m sure there are a bunch of other nuggets to be found in the new CBA that will change the game in subtle or completely unforeseen ways, but the big takeaway is, as far as the Jays and the draft pick compensation they’re hoping to get when Edwin and Jose sign elsewhere goes, everything is fine.

Now… if the league and the players wanted to immediately change the stuff that has to be surrendered in order to sign a QO’d free agent, I say giddy up! That doesn’t really hurt anybody, and it helps a guy like Bautista. It also means that the Jays would only need to give up a third rounder to sign Dexter Fowler, which sounds mighty damn nice.