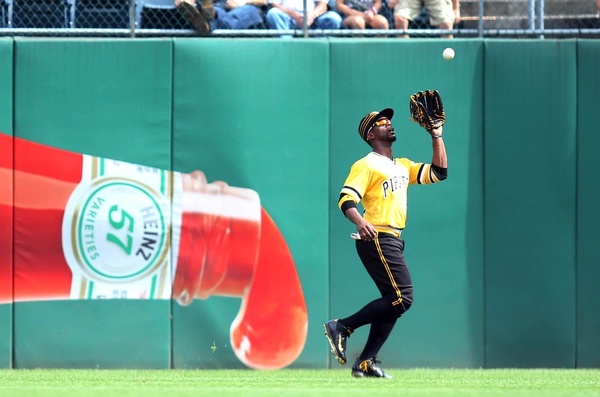 “An Andrew McCutchen trade looks increasingly likely” screams the tweet from Ken Rosenthal that takes you to his piece at Fox Sports from this afternoon. And while the title of the piece is a little softer than that — Why trading Andrew McCutchen is a real possibility for the Pirates — Kenny Ken Ken, and a number of others, certainly think something is up with the Pirates and their superstar-who-just-had-the-worst-year-of-his-career.

John Perrotto of wearing a windbreaker FanRag goes one step farther, as far as the Blue Jays are concerned, listing them as one of the potential fits for McCutchen. And Jeff Passan of Yahoo! Sports tweets that the Pirates aren’t just sitting back and taking calls — they’ve been aggressive in shopping their superstar-in-name-only.

And that’s really the thing: McCutchen was bad in 2016.

Like, across the board bad. His walk rate was a career low, his strikeout rate a career high, his second-worst ISO, an abysmal season in the field, a third straight year of decline by FanGraphs’ baserunning metric, and the loss of speed produced the second worst BABIP of his career, which translated to big hits to his average, on-base, slugging, and wRC+ — all of which were the worst marks of his career.

He simply wasn’t the Andrew McCutchen we knew and loved.

The fact that he plays for Pittsburgh makes his possible availability doubly interesting, as does his contract status. The Pirates won’t simply give him away, but one component of a deal would certainly be salary relief.

McCutchen makes $14 million this season, with $14.5 million club option for 2018 and a $1 million buyout. That’s an incredible bargain for the guy he was all the way up until this April. That’s Jay Bruce money with an extra option year thrown in for good measure!

And Pittsburgh is maybe something of a motivated seller, not just because of the money, but because, as Rosenthal notes, they’ll be better off defensively with Starling Marte in centre, which creates a much needed opening for Austin Meadows, who is on the horizon to take over in left field.

The fact that McCutchen has shown no interest in changing positions, as noted in Rosenthal’s piece, complicates matters for the Pirates. But if, say, he was moved to a team with an entrenched, Gold Glove-calibre centre fielder already? A team that isn’t wanting for leadership — something he tied to his desire to stay in centre in a quote via Rosenthal? Maybe that concern goes away. And if it does, he certainly wouldn’t be the same kind of liability on defence that he was last season.

So… that’s all pretty intriguing. Risky because of the downside that was on full display in 2016, but a real buy low opportunity on a guy with a not insignificant chance of going back to looking like the full-on superstar he was for every year of his career before this one.

At the very least, the Blue Jays should be taking this possibility very seriously. McCutchen maybe isn’t left-handed like they’d like, but $15 million isn’t too much to spend if it turns out he really has fallen off a cliff. And the likelihood is that, having only just turned 30 in October, he probably hasn’t. So the big cost you’re talking about is in what you’d give up to get him. Pittsburgh certainly doesn’t have to move him, and other teams will be trying to pry him away as well, so the acquisition cost won’t be nothing. But as an NL executive speaking to Perrotto points outs, “you’re not going to get a superstar-like package for a guy who might not be a superstar anymore.”

And here’s something: as much as the Jays have postured like a team that needs to horde every prospect in sight, they certainly can do this. And, realistically, they might not even have to sell the farm.

Perrotto throws out the names Joe Biagini, Rowdy Tellez, and DJ Davis, for example. And while I think the Jays would be loath to part with any kind of pitching depth, and while I cringe at the idea of dealing the prospect I badly want to steal Justin Smoak’s role by season’s end (OK… by mid-season), for the possibility of two cheap years of McCutchen? I sure as hell would consider it. (And then I’d try like hell to do it with someone other than Tellez — take my Richard Urena! Please!).

Would I be wary of the fact that this feels a little like the Francisco Liriano move from Pittsburgh, in which, despite still having a year-plus of control they’ve said they felt like the NL had caught up with him and started laying off his slider, and so moved quickly to flip him? Yeah, for sure. (Which is not to say that I think McCutchen’s issue is the league catching up to him, but it’s certainly possible Pittsburgh’s aggressiveness isn’t entirely financially based — i.e. they’re worried he’s not going to rebuild his value by the trade deadline or next winter).

So… yeah, holy shit I don’t think I’d include Tellez in a deal like this (and the Pirates seem to like their first base prospect, Josh Bell, anyway). I’d flip Upton the fuck back to Pittsburgh, though, so that they have a left fielder to keep the seat warm for Meadows — which would also make room for the lefty bat of Ezequiel Carrera to be the Jays’ fourth outfielder. (In this dream scenario I also figure the Jays sign Dexter Fowler and that the Pirates, needing some cover for the inexperienced Bell, take back Justin Smoak, as well.)

I… uh… I kiiiiinda think there would be other teams that can do better than Joe Biagini, $14 million in salary relief, Melvin Upton, Justin Smoak, a couple mil to cover most of Smoak’s salary, and maybe some mid-tier prospect, in exchange for Andrew fucking McCutchen. But you never know with those Pirates! They like their financial relief!

“We will continue to make challenging and potentially unpopular decisions,” said Bucs GM Neal Huntington, somewhat ominously, according to a tweet from the Tribune-Review’s Travis Sawchick this evening. So… hey, let’s go for it! If you’re the Jays and are looking to not commit too much to anything beyond 2018, and trying to keep the ability to strip this team down to nothing in at the trade deadline in July and next winter — which in my darkest of hours I keep thinking they maybe are — then McCutchen is a perfect piece. Even at a cost that’s higher than my little pipe dream above. (Just not too high, because… worse than Melvin in 2016!)

And that’s without even considering that he brings with him name recognition to give a hell of a nice PR win regardless of what his numbers looked like last year. Especially if… y’know… [makes thumb motion towards the door while glancing at Upton and Smoak].