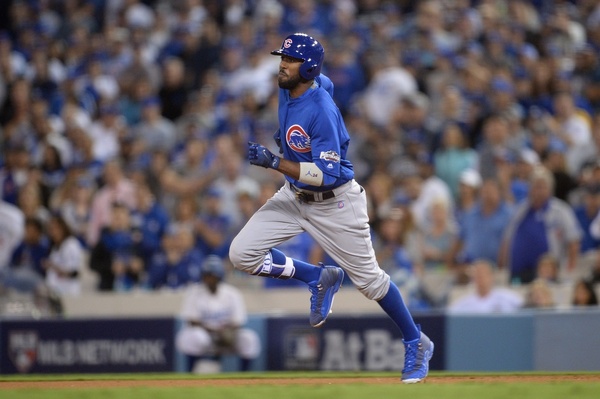 How does Dexter Fowler on four straight qualifying offer deals sound to you?

I know, I know, the new CBA has made it so players can only be given a qualifying offer once in their careers, but play along: this year the QO required a commitment of about $18 million, and according to a tweet here on Thursday evening from Jon Heyman, that’s the amount per year that Dexter Fowler’s camp thinks they can get.

As in, they’re not even sure he can get that much!

As in: holy shit, the Jays should seriously be in on this.

And also according to Heyman’s tweet, they are. Along with the Cardinals, Giants, and presumably others.

I’ve written about how much of a great fit I think Fowler would be here. Sure, he’ll turn 31 during Spring Training, put paying him something in the neighbourhood of $72 million until he’s 34 still looks better, as far as I’m concerned, than paying Edwin Encarnacion $90 million or more until he’s 37.

Fowler is three seasons removed from his time in Colorado, when his numbers were looked at with some suspicion, and they’ve been the best years of his career. His last three on-base percentages? .375, .346, .393. And he plays solid defence in centre field — meaning he’d surely be an above average defender in a corner spot, which is where the Blue Jays would almost certainly ask him to play, at least for as long as Kevin Pillar’s bat makes him a viable every day player (which hopefully is a while!).

For those of you who want to hate the idea just because Fowler is not Edwin, please note: Fowler was the better player in 2016, at 4.7 WAR to Edwin’s 3.9. And, as noted above, he’s three years younger.

But let’s not be too naive here. Pillar’s presence, and the fact that the Jays will likely be asking Fowler to move away from his preferred position, is a hurdle for them. And as much as we all know what an incredible city Toronto is, and what an incredible place to play it can be, um… San Francisco? St. Louis?

Those are damn desirable spots for a ballplayer, and as far as the Jays have come in the last two seasons in terms of reestablishing themselves as one of the league’s crown jewel franchises, I just don’t think they’re in that category yet.

Meaning: if they’re going to land him, they’re probably going to have to offer a not-insignificant amount of additional money.

Feelin’ confident, fans of the team that rushed to snap up Kendrys Morales??

Not trying to be a downer, but that’s how I would imagine this all playing out.

Maybe it won’t! Maybe the Jays will just give Fowler the $80 million they were going to give Edwin. Maybe they’ll offer a little less in the AAV but an extra year that nobody else will. We’ll see! It’s at least the kind of money where you’ve got to believe they’ll get close. The fit, for a team with two big outfield holes that has been (rightly) talking about getting more athletic and less right-handed, really is too perfect. The question is: will the dollars be. Let’s hope so, because they sure sound pretty damn sensible, and the Jays’ budget really shouldn’t be a limitation to anything they want to do this winter. They’ve just gotta want it.