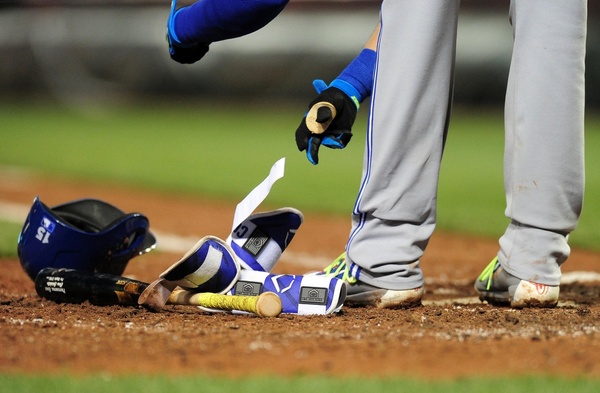 Transaction Friday alert! Though this evening’s moves are mostly ones that we should have all seen coming, given the 8 PM ET deadline for clubs to tender contracts to their arbitration eligible players. (Shit, in fact, I should have just pre-written all this!)

A couple moves, however, were mild surprises.

So let’s go through what just happened, starting with the least surprising:

There is no universe in which the Blue Jays weren’t going to tender a contract to Marcus Stroman. Because his season ERA was a little bloated, I think a lot of Jays fans felt that maybe he had a bit of a disappointing season, but he was probably better than you think. From the start of July onward he pitched to a 3.42 ERA, with peripherals in line with that number, and a 22.6% strikeout rate, compared to his 16.3% rate in the season’s first three months. He was a little homer prone, but obviously that, nor anything else in his performance or cost is grounds for a non-tendering. Far from it!

Projected salary per MLBTR: $3.5 million; arbitration years left after this: 3.

The fact that Barney has been tendered a contract doesn’t necessarily mean that he’s guaranteed a place on the Blue Jays’ Opening Day roster, but he’s still a valuable piece to have around. I say his spot isn’t guaranteed simply because Ryan Goins will be out of options this spring, and it’s not inconceivable — especially with the way the Jays seem to be collecting 1B/DH types — that there’s only room for one of the two of them on the roster. I’d imagine it isn’t their preference, but I’ll put that out there anyway. Barney’s numbers probably aren’t worth looking up, because if he’s playing more than infrequently, you obviously have some problems. But he’s a great glove and a bat that doesn’t fold like lawn chair and costs virtually nothing. So, again, not a surprise.

On other teams, or in other circumstances, tendering a contract to Aaron Loup might have been a tougher call than it surely was for the Blue Jays. Given their utter lack of viable, big league calibre, living, breathing left-handed relief options, they pretty much had to buy yet another ticket for Uncle Loupy’s Wild Ride. May God have mercy on all of us.

Thing is, Loup is actually pretty fucking unfairly maligned by this fan base. Understandably so, because he’s a reliever, and by virtue of that fact alone, his fuck-ups are going to be seared more deeply into our consciousness. But if you look at the actual numbers and leave room for some context — like the fact that bullshit just seems to find him (sometimes through his own fault, like with the hit batters or wild pitches at inopportune times, and sometimes not, like all the damn cheap hits, which in 2015 and 2016 produced .339 and .342 BABIPs for him) — he’s really not nearly as bad as people think. Steamer’s 2017 projections for him come up with 3.51 ERA, 3.72 FIP, 36 hits, 14 walks, and 37 strikeouts in 40 innings. I sure as hell would take that. Put a different name and number on the jersey and I think most fans would too.

Zeke! Like Darwin Barney, the playoff hero — who could forget Zeke’s Thunder? — isn’t exactly a lock to make the 2017 Blue Jays. He’s out of options, and holy shit, I don’t think I want to live in a world where both Zeke and Melvin Upton have roster spots, given that it would likely mean that the Jays don’t also have two other, better outfielders on the roster. But at such a low cost, the Jays really couldn’t say no here. He was a valuable piece for them in 2016, did everything they asked, seems to be well-liked in the clubhouse, and didn’t even provide the same kind of defensive adventures we’re used to seeing from him. He didn’t earn a job by virtue of his play down the stretch and in the playoffs (he’s still bad), but he certainly earned a longer look and a little less doubting. So… sure! Zeke!

Heeeere we have the real interesting bit — unless you’ve been watching the rest of the league, where some intriguing names, like Tyson Ross, Ben Revere, Welington Castillo, and Rubby De La Rosa, have all been added to the free agent pool after being non-tendered by their now-previous clubs — as the Jays have announced that Chris Colabello and Andy Burns had been placed on waivers, have cleared waivers, and have now been outrighted off the team’s 40-man roster.

Burns would be a curious move if not for the fact that, as Bluebird Banter explains, “he has no choice but to accept his assignment to the minor leagues.” Colabello, on the other hand, has already been outrighted once in his career, meaning that he can elect free agency. His case, then, is the one everyone is going to talk about. Especially because he’s Chris Colabello.

I still get people asking me if, given all the talk we’ve heard about the Jays and 1B/DH types this winter, there’s a chance ol’ Bing Bong could still be in their plans. This move rather emphatically makes those questions moot.

Or… y’know… it would if not for the fact that they should have already been made moot by how utterly terribly he performed in Buffalo this season… after coming back from a PED suspension… after having a stellar 2015 season that was, if we’re being honest, a serious bit of a fluke anyway.

I mean, you can’t take away those hits he got, but his .411 BABIP led the majors by 23 points over second place DJ LeMahieu (min. 350 PA), and he sure as hell doesn’t fit the profile of a guy who is going to be able to sustain those kinds of numbers. The highest BABIP among qualified hitters over the last three seasons combined is the .369 mark belonging to the sneakily speedy Paul Goldschmidt (who ranks in the top 20 for stolen bases over that span!). So… Cola was always going to have to start at a baseline considerably below that BABIP-powered 2015. And then there’s the whole PED thing, and the fact that — though you hate to say it — he does fit the profile there. After all, he was basically a last-chancer, putting together surprising big league success after coming from out of nowhere in the independent leagues.

I hope that’s not the case. I hope he rebounds elsewhere and shows that some of the skills we saw in 2015 were for real, and not just BABIP or PED illusions. He seemed like a nice guy and the way his teammates rallied behind him last year after the suspension attested to that. But oh boy, was he ever brutal when all that was over and he returned to the Bisons.

A .180/.248/.288 line over 153 plate appearances is mighty ugly. And even if, understandably, the suspension was still in his head, and we can probably expect more from him in 2017, with some time to put this all behind him, I can see why the Blue Jays would maybe rather just move on, and why it might be best, for his sake, to move on as well.
But we’ll always have 2015.