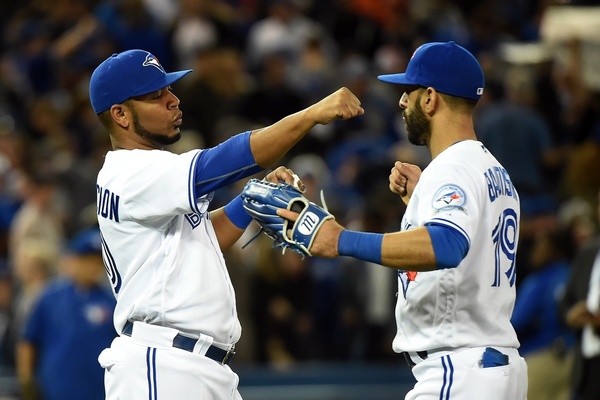 The Toronto Blue Jays front office is “steadily nudging the public toward accepting a large step backward,” writes Cathal Kelly in the latest of an eye-roll inducing number of attempts to feed arguments to dipshit Twitter eggs from the pages of the Globe and Mail.

It would be plenty dumb to make the suggestion, on the evening of December 2nd — i.e. less than two days after the league and players’ association allowed teams to get back to the business of the off-season by avoiding a work-stoppage over the terms of their next collective bargaining agreement — that the Blue Jays haven’t done enough to address the holes on their roster. It’s so early in the process that this simply isn’t a conversation worth having at this stage, and surely Kelly has covered the sport long enough to know that the vast majority of player movement is still to come. Yet he goes one fear-mongering step farther, steadily nudging the public toward the notion that the club might not do anything at all.

After a detour into disingenuous dipshittery about Kendrys Morales “being made to sound like Babe Ruth reincarnated” (huh?) — wherein he quotes WAR for stat cred but neglects to perform even the most basic investigation into Morales’s actual value (his 135 wRC+ over the season’s final four months was as good as Edwin Encarnacion’s season rate, similar to his own strong 2015, and based on his exit velocities and poor luck/a very pitcher-friendly ballpark, there’s reason to even be excited about what Morales might be able to do as a low-cost Encarnacion replacement) — Kelly postures like he’s divined for us what’s really happening with the club.

“The Jays seem like a very delusional Toronto house hunter,” he writes… uh… because of their “failure” to sign Brett Cecil? Josh Reddick? Sean Rodriguez?

“You don’t want to buy since things are so expensive. You keep telling yourself the prices have to drop some time. While you wait, the market continues to go through the roof. You steadily downgrade your expectations — you wanted something fully detached with a driveway. Eventually you’re willing to go with a tool shed that needs a little work. That’s what being ‘opportunistic later in the off-season’ [something Atkins has said the club will look to do] is starting to sound like.”

It’s would be a cute analogy if it wasn’t such idiot-empowering horseshit. Or if we weren’t simultaneously being told that acting quickly on Morales was bad, but not acting quickly enough on anybody else is also bad.

SO WHICH IS IT?

Later Cathal makes a big deal of what I’d say is an obvious misreading of a quote from Ross Atkins. On the possibility of bringing back Edwin Encarnacion now that Morales is in the fold, Atkins explains that “two guys that do similar things is less than ideal for a team and money has been spent. It doesn’t make it impossible, but it’s certainly less likely.”

Kelly seizes on the words “money has been spent,” and posits that this is Atkins hinting that “Morales isn’t the beginning of a shopping spree. He’s the end.” Dun dun dun…

Such a reading would make sense if not for the fact that it seems far more likely that Atkins is specifically talking about that one particular roster need, or that there have been reports from numerous sources about the club’s $80 million offer to Encarnacion, or that Brett Cecil was offered a three-year contract, or that the team right now would start with less money on the books that last season, despite Mark Shapiro’s statements that payroll will go up (and the expectation from most that it will get to the $160 million range), or the fact that they demonstrated financial heft in last summer’s trade for Francisco Liriano, or by making a qualifying offer to Jose Bautista — who was no slam dunk to reject it, and still may end up regretting that he did.

It would also make more sense if it weren’t December fucking third, or if there weren’t still several spots on the roster that need additions. They won’t go unaddressed, and spreading dollars around to mid-tier and bargain players to raise the floor of your roster isn’t akin living in a shed — especially if you’re actually thinking about how dollars will be allocated in the long term, not merely jerking-off at your own ability to make the whiniest squids of the fan base give your article slow claps.

I mean, be serious.

This would be a good point to end on, but apparently Cathal wasn’t done.

“Shapiro and Atkins have a sort of prisoner’s dilemma,” he suggests. “They can spend on Encarnacion/Bautista (making fans happy and their employers’ unhappy). Or they can go cheap (achieving the opposite effect).”

First of all, I wouldn’t be anywhere near so sure that Rogers would think saving $20 million on the baseball team is worth the trade-off in terms of lost gate receipts and ad revenue for Sportsnet. (The Jays have already committed $120 million to 2017, with about $7.5 million more due to their arbitration-eligible players, and another $5 million or so to the their pre-arb guys).

For two, this “dillema” precludes every other possibility but sign ’em both or cheap out? Seriously?? Like… what about the idea of spreading some money around, raising the floor, adding depth, becoming a little bit younger, more athletic, and less right-handed? Y’know, like they’ve exactly said all along that they were going to attempt to do?

No, no, in Cathal’s world Shapiro and Atkins aren’t baseball men looking to maximize the value they get from budget dollars so much as cynical morons praying nobody tries to look behind the curtain while they try to figure out how to stay employed as long as possible before their ruse is discovered.

If it goes sideways on them, they don’t have to deal with it until this time next year. At that point, they can lure the fanbase’s attention away with a coaching change or the big signing they might have made at this point.

What Shapiro and Atkins can’t fail to have noticed is that Toronto is uniquely susceptible to the yo-yo effect of roster management. You can let things drift off for a bit, frustrating fans. Just when they begin to pull back wholesale, you give them a nugget – trading for R.A. Dickey or Donaldson; putting up good money for a bad player such as Melvin Upton. You wait to see how that turns out. If it does (and it has), that buys you some time to let the yo-yo unfurl again. Two years of playoff appearances probably equals two more years’ benefit of the doubt.

I mean… holy shit. It feels like a waste of time to even bother pointing out that this is utter nonsense. Like, trading for a reigning Cy Young winner to cap off a winter of huge transformation that made the club pre-season World Series favourites, and trading for the guy who would win the AL MVP while leading the team to Game Six of the ALCS in his first year and another ALCS the next, were mere nuggets designed to mollify fans? OK, MORE NUGGETS PLEASE!

And I sure as hell can’t figure out how holding up the $5 million the Blue Jays will end up paying for a year-and-a-half of Upton makes his point — whatever the hell that might be.

Ultimately in the piece we’re eventually “nudged toward” believing that the way the Blue Jays’ management really wants to end 2017 is “having saved a couple of hundred million dollars.”

Presumably he’s referring here to the total commitments that will be needed to sign both Bautista and Encarnacion, which is odd, because it’s not like the budget going forward is going to go down by that amount. And this gets to another thing that drives me crazy about these kind of insufferable “cheap Jays” hit pieces, which is how often the Jays and the front office are conflated with Rogers. They’re not the same thing! Ownership provides the club with a budget, and it’s up to the front office to allocate those dollars. Obviously ownership can push the club in certain directions or rein them in, but I don’t think anybody thinks they’re terribly hands-on as far as specific moves are concerned. And should ownership allow the team to spend more? Of course! The budget is actually pretty damned healthy, especially considering the weakness of the Canadian dollar, but few would disagree that this franchise absolutely deserves to have more money to spend than they currently appear to, and I suspect it could be argued that they’d make more money for the company, long-term, if they did.

But what all that means is that if you’re going to piss and moan about the budget, you talk about TV ratings, advertising revenue, AL-leading attendance, etc. And that’s totally fair! However, if the club chooses not re-sign Bautista and Encarnacion — much like their choice last year not to sign David Price — it isn’t “the Jays” being cheap, it’s the front office choosing to allocate the dollars available in the budget handed to them by ownership in a different way.

You can argue that they should go back to a more Anthopoulos-style stars-and-scrubs philosophy of roster construction, throw a tonne of money at Encarnacion and then fill in the rest of their roster gaps on the cheap, but that’s a different conversation than whether they’re being “cheap” or not.

That is, unless they don’t use the available dollars at all, at which point rage away. But, I mean, come on! You’d have to be some kind serious idiot idiot to think, at this stage, with so much off-season left in which to do so, that it already seems clear that they won’t.