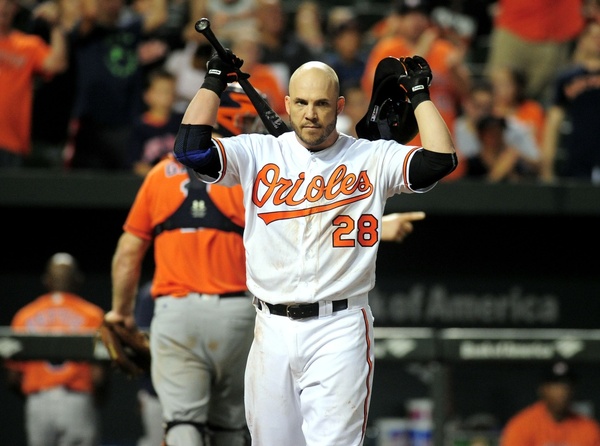 Was Sunday night’s Mitch Moreland talk just a way to get Steve Pearce and his agent to act? Maybe! The thought of the Smoak-like first baseman playing the outfield sure didn’t quite smell right, and now the Jays have gone and signed themselves an actual outfield-playing first baseman. Steve Pearce!

OK, so nobody is going to get terribly excited by Steve Pearce. Aaaand the negativity-spewing dipshits are going to have a field day with yet another painfully unsexy move from the club — even though this is exactly what anybody paying attention would have been expecting. But whatever! While they make noise, let’s think about how Pearce fits this roster — which is quite well, frankly.

And if you look on the surface, those small sample sizes would be concerning when looked at in conjunction with Pearce’s piss poor 2015. He was about league average against right-handers (107 wRC+), but couldn’t do anything with lefties, hitting them to a pitiful .196/.266/.357 slash line.

If that’s the Steve Pearce the Blue Jays are going to get, that’s a problem. But a huge part of Pearce’s 2015 struggles is the .209 BABIP he posted against left-handers. His .249 mark against righties wasn’t a whole lot better, either. There’s some bad luck in there, but there’s also the fact that Pearce wasn’t hitting the ball with the same authority as he did this year (per his exit velocities at Baseball Savant) or in his very strong 2014 season (per his hard contact rate at FanGraphs — which I use since exit velocity data isn’t available for seasons prior to 2015).

Part of that may have been due to an oblique injury that limited him to just 35 games in the second half of 2015, which… maybe isn’t so much a mitigating circumstance as it is par for the course when it comes to Pearce. With his positional versatility such an asset (he saw action at first, second, third, left, and right field in 2016), and his bat against right-handers decent enough to be playable, he sure is a guy that doesn’t get into a lot of games. And a lot of that has to do with the fact that he’s always getting hurt.

He’s hurt right now, even! Shi Davidi tweets that Pearce “had surgery to repair flexor tendons in his right elbow in late September.”

That injury ended his season, and he spent time on the DL with a hamstring issue in 2016 as well. So, if your plan is to have Pearce steal at-bats from Justin Smoak and basically become this club’s every day first baseman — and holy shit, it should be! — you’re maybe going to need to rein in that expectation little bit. It’s not like this is going to change as he gets older — and Pearce will turn 34 in April.

Still, though, this is a guy who was a five win player for the Orioles in 2014, and a two win guy again last year. Even with those abysmal 2015 numbers dragging him down in the overall, he’s still been a .267/.347/.493 hitter (131 wRC+) over his last three seasons/1000 plate appearances. Hey, and those he’s not a speed guy or a stolen base threat, he gets halfway decent marks for base running, too. For the price the Jays paid, that’s pretty decent!

Of course, no fan cheers for value in a vacuum. The fact that you can pretty easily see that Pearce’s could be a nice contract for the club doesn’t change the fact that he’s not Edwin. And the fact that this is yet another signal that Edwin is not coming back to the Blue Jays is going to upset a lot of fans who’ve been trying to deny that reality since the day Kendrys Morales was signed.

Hey, but Pearce doesn’t need to play at first base. Edwin and Pearce and Smoak and Morales could find a way to coexist on this roster — Steve Phillips be damned! (I mean, I’m sure as hell not going to pick today to be the day I start listening to what that guy has to say). So… if you held tight to the Edwin fantasy before this, you probably can still take comfort in it.

Arden Zwelling tweets that he thinks payroll could go as high as $165 million, which means they could still have something just shy of $30 million left to play with (though he later guesses it’s more like $23 to $25 million). That would make a run at Edwin tough, given that you’d still like a reliever, a backup catcher, and a corner outfielder. Dexter Fowler, on a deal slightly backloaded, could still fit and allow you to do those kinds of things, though. So could being the mystery team on Andrew McCutchen, or landing someone like Curtis Granderson or (ugh) Jay Bruce.

The roster, in other words, still hasn’t taken its final shape. Steve Pearce is a pretty nice fit for it though. Maybe don’t be too upset.