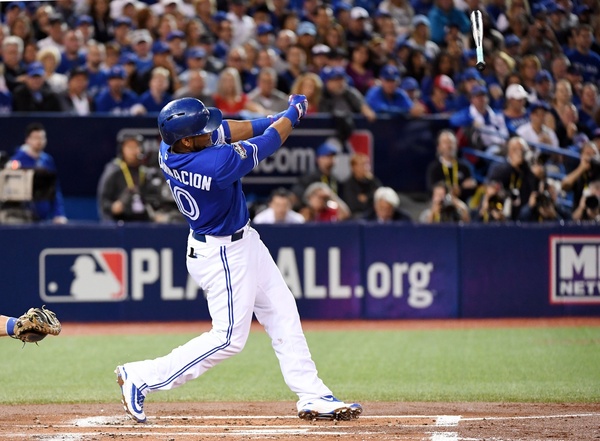 If anybody has been trying to answer the question, “What’s the sound of Paul Kinzer crying out for help?”, Jon Heyman may well have just provided it for you.

Look, nobody should get their hopes up here. The likelihood that Edwin will return to the Toronto Blue Jays dropped to something close to zero the moment they signed Kendrys Morales — whether anybody wanted to admit it then or not.

Not a whole lot of teams makin’ a pair of 34-year-old DHs the centrepiece of their otherwise spendthrift off-season that leaves them woefully inadequate in both corner outfield spots, y’know?

However! As far as pipe dreams go, I guess this is as good a one as any:

Jays haven’t absolutely been ruled out for Encarnacion, even after Pearce signing. Door open a crack. “Miracles do happen”

As I said on Twitter, Steve Pearce could play the outfield. And Justin Smoak could play a sad song growing quieter on the wind as he drifts out to sea.

No, but seriously. Pearce is signed mighty cheaply and has never cracked 400 plate appearances at the big league level — partly because of health, partly because he’s more a platoon-ish bat than an everyday kind of one. You could play him in the outfield and give him spot duty at first, second, and third and still easily have a fit and justify the amount you’re paying him. Edwin. Could. Still. Fit.

But… uh… does this not maybe sound a little more like a desperate agent trying to create some kind of appearance of a market for his client now that it seems possible the bottom has fallen out?

As does this: Rob Bradford of Boston’s WEEI.com writes that he’s now hearing Boston is one of Edwin’s three preferred destinations — a list that also contains the Jays and a mystery team that we only know isn’t the Yankees.

It would be pretty funny stuff if it wasn’t fucking with Edwin’s shit!

Or, y’know, suggesting that he might still end up in goddamn Boston.

I guess this the point where we could start dreaming about the kind of contract that might make sense for the Jays to jump back in with — a couple years with a vesting option, perhaps? — but I can’t imagine this situation is quite such a disaster for Edwin just yet. If he signs for less than that reported four year, $80 million offer, though, what a shit show it will be for everyone involved — except Edwin, no matter how his agent or the inevitable Toronto Sun piss takes try to spin it.