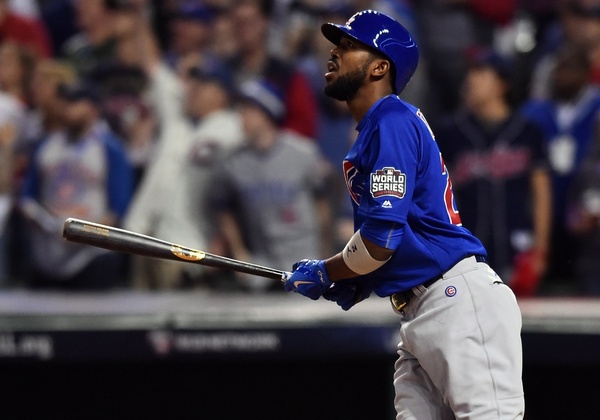 Today in better news, by all accounts the Blue Jays are still in the running to sign Dexter Fowler! And they’d have to actually pony up real money to do so!

Last night Jon Heyman reported at FanRag that the Jays have offered Fowler a four year deal worth $60 million — or $12 million short of what he and his camp think they can get. And today it seems that the St. Louis Cardinals, the other team in hard on the market for his services (if the reports are to be believed), have offered something similar.

Mark Saxon of ESPN.com passes on word from “a rival executive” that… well… is exactly what I just said. “The St. Louis Cardinals’ initial offer to Dexter Fowler is in the same range as the four years and $60 million that the Toronto Blue Jays reportedly made.”

OK, so maybe not a lot has changed just yet. But maybe it has!

Bob Nightengale of USA Today, only an hour after tweeting that Fowler was “squarely in the sights” of the Jays and Cardinals (while raising the somewhat dubious spectre of the Canadian tax rate working against the Jays), tweeted that the Cardinals had been having internal discussions about Ian Desmond — a different option for the same need.

Does that mean they’re cooling on Fowler? Does it mean that, as Shi Davidi suggested, they might be trying to force Fowler’s camp into a decision by making it look like they’re ready to move on?

I have no idea! But the Fowler talk around the Jays isn’t going away.

In fact, John Gibbons admitted, per a John Lott tweet, that Fowler certainly could be the answer the Jays are looking for in their lead-off spot — though he also said Ben Revere could work there too. Apparently that wasn’t by mistake, either, as Davidi reports in his latest for Sportsnet that the Jays have a similar plan for Fowler as they did with Encarnacion: Dexter is the Plan A, and a Plan B would involve smaller acquisitions out of a pool of guys like Revere, Michael Saunders, and Brandon Moss.

Is that just posturing to get Fowler to make a decision? One hopes! I mean, holy shit, Revere was bad this year. And he is much more a nine hole hitter, not a corner bat, and is the kind of dice roll a team should be making in January if they come up completely empty, not talking about in December.

One also hopes that, if they’re following the EE trajectory here they don’t move on too fucking quickly. *COUGH*

I have no reason why, but my gut says that they actually manage to get this done, so… prepare for disappointment, as I will inevitably be hopelessly wrong!