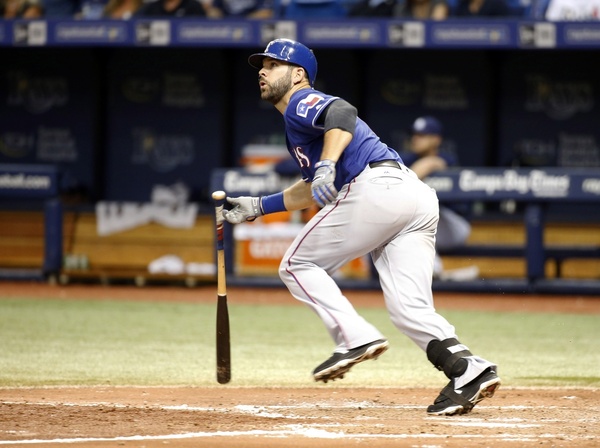 Some quick dinner time notes coming at you from the Winter Meetings down in Jerkwater, Maryland. To wit!

Ken Rosenthal tweets that the Red Sox have come to an agreement with Mitch Moreland. The one-time reported Blue Jays target is… not great. More importantly, though, he fills a 1B/DH need for the Red Sox that might have otherwise gone to Edwin Encarnacion — even though the Red Sox had declared repeatedly that they weren’t going to go there.

This probably rules them out for Jose Bautista, too. And yes, they had said that as well, but you never know with these shifty Red Sox! Except now, given the state of their roster and the role Moreland will occupy, you kinda do.

So it’s now on to the next team we don’t want to see sign Edwin: the fucking Orioles. (You can add the fucking Rangers to that list, too, if you like.)

Ben Nicholson-Smith tweets that the Blue Jays have acknowledged that they like Dexter Fowler. Ross Atkins calls him a “great player,” and Benny Fresh again notes that “some in the industry expect his decision to impact the Jays’ next steps.”

Their next steps, of course, should be signing Dexter Fowler!

And it is perhaps of note that the Jays’ biggest rivals his services (as it has been so far reported anyway), the St. Louis Cardinals, are acting like things are kinda quiet on their end. Mark Saxon of ESPN tweets that Cards GM John Mozeliak tells him they’re “not at a point where we’re just a phone call away on anything.”

Shi Davidi has a piece up at Sportsnet about the status of John Gibbons’ contract, and the possibility that he’ll be given an extension — something that the two sides have put off during this important time in the off-season.

Hey, it beats reading about the fuckin’ WBC.

Lastly, back to Benny Fresh, as he tweets that Ross Atkins also spoke to reporters about the need for rotation depth, telling them that some minor league signings should be announced on that front rather soon.