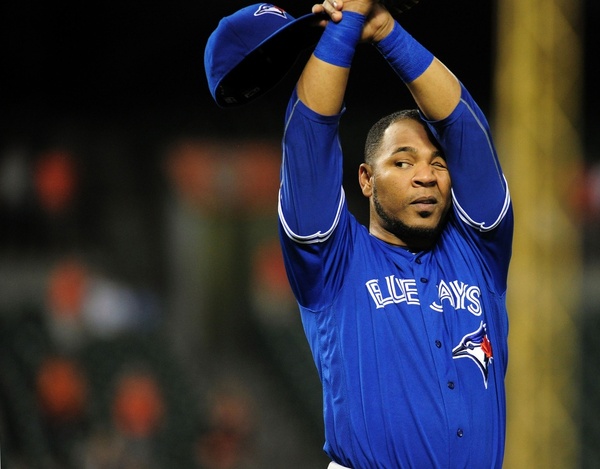 If Buster Olney was a random fan in my Twitter feed and made a suggestion like the one below to me, I’d probably be inclined to pat him on the head for his creativity while scoffing derisively to myself about it (then I’d probably tweet a bunch of half-assed “jokes” and ultimately throw him under the bus for his suggestion on the next podcast, in case you were wondering about me).

I’m not going to be so condescending to Buster, but the notion he tweeted forth here on Wednesday (or whatever day it is) afternoon is quite a doozy…

Idea for TOR: Present Encarnacion close to prior offer. If he says yes, talk to Pearce about part-time role or trade. There would be takers.

If I’m Steve Pearce — who has already been scoring points with the fan base by talking about the home field advantage the Rogers Centre crowd gives the team — I’m pretty sure I know exactly where I’d be telling the Jays to take the idea of trading him already. Plus, there are rules to prevent such deals. A newly signed free agent can’t be traded until the following June — though Buster notes in a follow-up tweet that it could happen with the player’s consent.

Yeah… good luck with that.

The idea of giving Pearce a part-time role, though, is… pretty close to what he’s signed on for anyway, I think. No?

You could do worse than making Pearce exclusively and outfielder and having him face some right-handers, with someone like Ezequiel Carrera spelling him occasionally. And, though I can’t believe I’m about to say this, in the other corner you could platoon Melvin Upton with someone like Ben Revere — who was awful last year, but has some utility (despite not being anywhere remotely near as good as people who love hollow batting average think) and would come very cheap.

The problem you get into there, though, with a hypothetical Edwin signing in two as well, is roster size.

With a twelve-man pitching staff, that leaves just 13 spots for position players. Against right-handers, in the scenario presented above, that would be Revere, Pillar, Pearce, Donaldson, Tulowitzki, Travis, Encarnacion, Martin, and Morales. Upton and Carrera would bring the total to eleven. They’ll definitely need a backup catcher, so that’s twelve. And then they have just one spot left for Justin Smoak, Darwin Barney, and Ryan Goins. (Assuming they don’t go with an 11-man pitching staff, but that seems unlikely).

Obviously in that scenario fans will want Smoak dumped, but what that likely means is eating his contract, so you’re now paying a $4 million premium to sign Edwin. You’re also being forced to gamble on Revere, Upton, and Carrera being productive, plus you’re risking losing Ryan Goins on waivers, as he’s out of options and would need to clear them in order to be sent to Buffalo.

Alternately, you could keep both Goins and Barney at the expense of one of your lefty outfielders (Carrera, who is also out of options, and Revere), but now one of either Pearce or Upton is without a platoon caddy, which obviously is problematic in its own right. Plus you’re still paying the Smoak premium to sign Edwin.

So… yeah… you can maybe see why Buster came around to the idea of trading Pearce, but even that doesn’t really solve the problem. Take him out of the equation so you can sign Edwin and your pool of potential outfielders is back to Pillar, Upton, and Carrera, plus whatever cheap piece you can find with your nearly-tapped-out budget (Dalton Pompey would no doubt then be in the mix as well).

To me that doesn’t look nearly as good as adding an actual, everyday outfielder. Dexter Fowler, for example! But even failing that, someone else who doesn’t need to be platooned there works, too. In that scenario you have Fowler, Pillar, and an Upton/Carrera plaoon, with Pearce and Smoak nominally splitting time at first base (though I suspect Pearce steals a lot of those at-bats).

As for your roster, you’re now talking Fowler, Pillar, Upton/Carrera in the outfield, Donaldson, Tulo, Travis, and Pearce on the infield, Martin and a backup behind the plate, with room for three more pieces on the bench: Smoak, Barney, and Goins. And given the difference between what Fowler will likely make and what Edwin will likely make, plus the fact that Smoak’s $4 million is no longer a sunk cost, you have more money with which to fix the bullpen, too.

In other words: go sign Dexter Fowler! Or, at the very least, find someone who can play in the outfield every day.