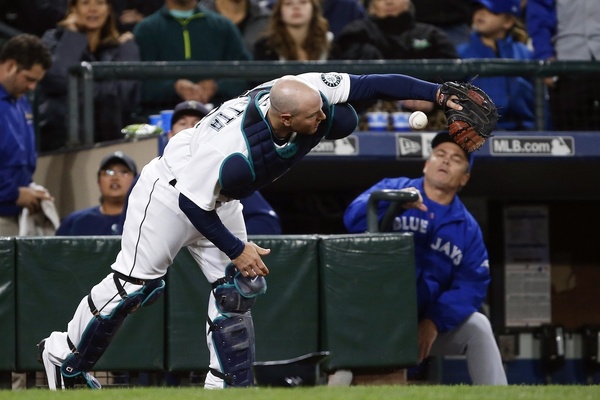 Obviously word of Jose Bautista’s agents meeting with the Toronto Blue Jays this evening was going to cause a bit of a stir. But the Jays certainly still need to find a backup catcher, and the fact that Ken Rosenthal tweets that the same agency (Octagon) represents free agent catcher Chris Iannetta maybe makes one think that he could have been more the focus of the meeting than the Jays’ own free agent slugger.

That’s just a guess (though Ben Nicholson-Smith notes that his sense was that the talks with Bautista didn’t end with the sides particularly close), but either way, Iannetta is maybe an intriguing fit here.

First and foremost, his bat has been backup catcher-esque in each of the last two season, but in the four years before that he had a very nice little run. From 2011 to 2014 (for whatever that’s worth at this point), Iannetta was worth nine wins as the Angels’ primary catcher, putting up a 113 wRC+ over that span, with a .361 on-base.

Ross Atkins said at the end of the season that they’d be looking for a veteran backup who can provide some leadership and a tough at-bat, and that certainly seems suggests Iannetta fits the bill. What those numbers also say is that he’s a guy who has logged a not-insignificant number of innings over that span. He has, in fact, played between 92 and 115 games in each of the last four years. He wouldn’t be asked to catch nearly that much by the Blue Jays, but if he was called on to play more than Josh Thole did last year, I think you probably feel pretty OK about it. (Catcher caveats applying).

A tough-out hitter coming off a down year with a good hard contact rate playing in a pitcher-friendly ballpark? Yeah, I think that could fit what the Jays might be looking to do.

Which isn’t to say that Iannetta is the perfect play here by any stretch. He was awful at the plate these last two years, and he consistently fares very poorly by pitch framing metrics. Plus, he might think he can find himself a gig with a little more playing time, and made $4.5 million last year — which isn’t a tonne, but cramps what the Jays will be able to do with their budget that much more, assuming he doesn’t take some kind of drastic pay cut.

So… I don’t know. Maybe this wasn’t worth even bothering to explore! But you could certainly do worse in a backup for Russell Martin. Hey, and maybe Iannetta, at this stage in his career, will be lured by the opportunity to catch the Blue Jays’ nice little collection of pitchers and play for a winning ballclub in a frenzied environment.

Sure. Works for me.